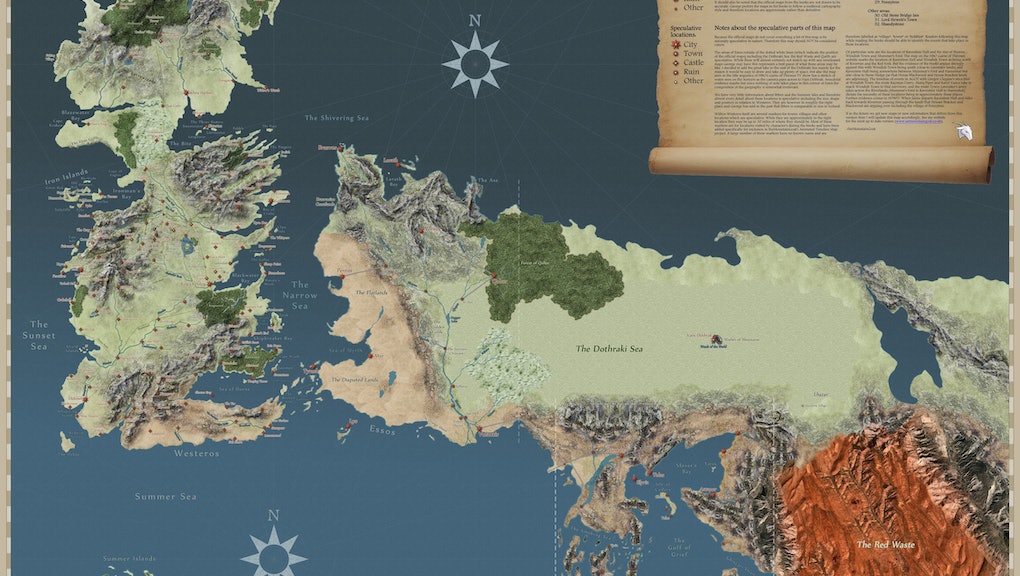 You Can Now Travel to Westeros Thanks to Google Maps

We are a culture obsessed with maps: maps of the real world, maps that illuminate things about our personalities, maps that take us into the lands of our favorite fiction. With programs like Google Maps, you can whirl around the planet, traveling to Mount Everest, the White House, Piccadilly Circus, then the Trevi Fountain, all without ever taking your eyes off the screen. Now, thanks to a fan-made Google Maps API design, you can go even further — to George R. R. Martin's beloved Lands of Ice and Fire.

The interactive map allows fans to do what they've longed to do all along: truly experience the world of Westeros. Visitors can zoom and scroll through the fictitious terrain, discovering all the landmarks the books and the show have made so dear. In addition to these readily familiar Google Map features, this map's creator, serMountainGoat, has added a nifty time slider to take you through Westerosi history. You can also overlay the map with the travels of well-known characters (Lannister and Stark alike). If you've been fantasizing about where the Vale begins and the Iron Islands ends, or whether to experience firsthand Tyrion Lannister's wanderings across the lands, now's your chance to dive in to the political history of Westeros. You can also save yourself from unintentional spoilers, thanks to the "Spoilers Through" slider, where you can precisely control the extent of series' storyline. This type of full fan immersion is an amazing example of what happens when cult obsession and the Internet work in beautiful harmony.

Like other unofficial and subcultural endeavors, the map is a fantastic and fully fan-led effort to pass through the mirror of the everyday into a space of reference-ready facts, histories, languages and entire alternative worlds. Lord of the Ring fandom created its own wow-inducing map in 2013. Other U.S. locales, including New York, Chicago ("Winter Is Forever") and the nation as a whole have found ways to compare themselves to Westeros. And over at Stanford's Generation Anthropocene blog, fantasy and geophysics joined forces to give birth to an impressive geologic Game of Thrones map.

Harry Potter enthusiasts are also known for making their fantasy world a reality, most recently through a website called Hogwarts Is Here, where fans can take wizardry classes in the style of Harry, Hermione or Ron.

With virtual reality on its way, how long will it be before someone designs their own virtual Westeros where they can traipse, battle and philander to their heart's content?

Of course, if maps just don't seem like enough, there's always the $12,984 Game of Thrones film location tour. If you need Westeros to be real, there are ways to make it so.