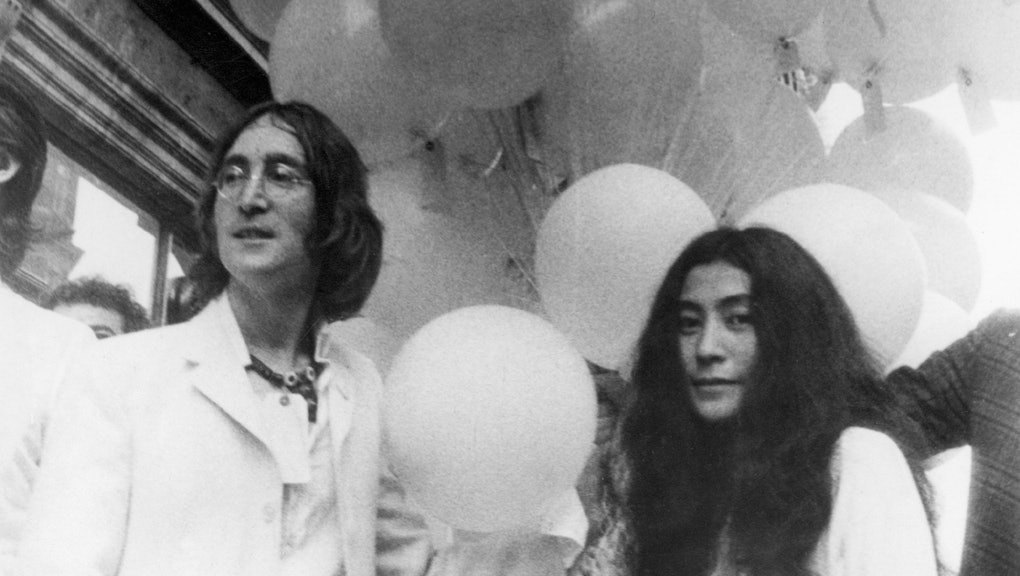 The Real Reason Women Are Blamed When Bands Break Up

When Courtney Love was pregnant with Kurt Cobain's daughter, he gave her a Yoko Ono box set. She threw it at his head.

He meant it lovingly, but when fans started making the comparison between Love and Ono last week, they meant it as viciously as possible. Ono, John Lennon's wife, is broadly known in our culture as the woman who broke up the Beatles. She inaugurated a long line of blaming women for what is, at its most basic level, dudes being unable to get along. Ladies seem always to be catching flak for meddling in the affairs of men, especially when it comes to wrecking rock bands. The ghost of Ono (who's still alive) looms large in the minds of male rock fans. And it's consistently used to shame women.

It's time to set the record straight.

When the Beatles called it quits in '70, everyone blamed Ono. But long before the Japanese artist-cum-peacenik started crashing the Beatles' studio sessions, the British invaders were hurtling headlong toward an ugly breakup. Ringo Starr was hitting the bottle harder than ever, Lennon and McCartney were constantly bickering, and George Harrison was itching to showcase his emerging writing chops. During The White Album sessions, Lennon took a cheap shot at McCartney by decrying his effervescent pop as "granny music shit." Things got so tense that Starr quit for a couple of weeks, though it's hard to say whether anyone noticed. The band was succumbing to its internal injuries, that much was clear. So then why does Ono get blamed for the fall of the Fab Four?

That's why it's offensive to compare Love to Ono. Nirvana presents an even more egregious slight since the Seattle grunge rockers never really even broke up. The band parted ways with heavy hearts following frontman Kurt Cobain's tragic suicide; matching Love with Ono makes exactly zero sense. All the same, criticism of Love falls into two categories: (1) She used Cobain to advance her own career, and (2) she had a hand in Cobain's death. As the evidence shows, both are way off base.

First, Love was famous before she met Cobain, both as an actress (Sid and Nancy, Straight to Hell) and singer for her alt-rock band, Hole. Second, at the time of his death, Cobain was on a steady diet of heroin, painkillers and champagne. If there's any lingering doubt about this clunker of a conspiracy theory, look no further than Cobain's suicide note: "Please keep going Courtney…I Love you. I Love you."

Love gets blamed for destroying Nirvana because she makes her own rules and then breaks them. Though some see Love as basking in the glory of her late husband, she was soaking up the spotlight before she crossed paths with Nirvana. In refusing to conform to the role of quietly weeping widow, Love is being a strong woman — not an evil interloper. What's the problem with that? Sure, her antics may be disturbing and even tasteless at times, but that's Love's prerogative. And it has nothing to do with her late husband.

The reason women are always to blame is as old as Eve: Men can't have feelings, so women get blamed for when emotions get in the way. Since straight guys expect each other to sport tight poker faces, exchanging terse dialogue like something out of a Cormac McCarthy novel, there's no room for "feelings." With a group of guys, so the fallacy goes, there's no melodrama, no messy spectacles, no hurt feelings. When emotions flare, fault gravitates toward the alien outsider with unfamiliar internal wiring (read: women).

But men engage in pointless power struggles all the time — especially in bands. We need to stop raising generations of rock star-worshipping kids to believe it was all the woman's fault. Truth is, it's not.