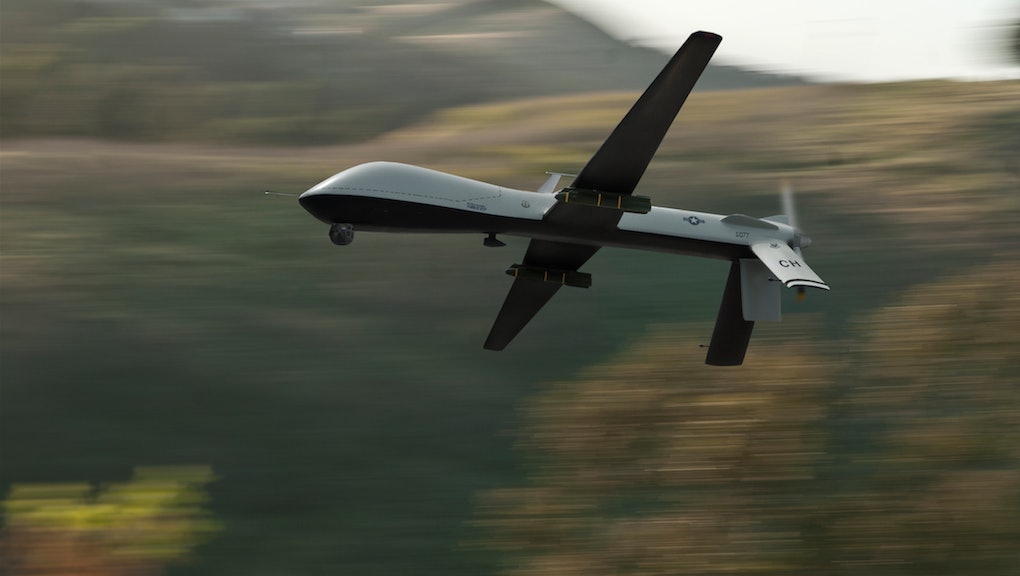 What would drone-strike footage look like if one of those heavily armed UAVs took aim at the West? Thanks to artist Thomas Van Houtryve, who mounted his DSLR camera on a quadcopter and flew it over weddings, soccer games, public prayer groups and funerals, now you'll know.

What would it look if those missiles and cameras were pointed at your house, your car, your family and friends?

Frankly, it's bone-chilling (the author's own Instagram captions are in italics).

The London-based Bureau of Investigative Journalism estimates that over 200 children were killed in U.S. drone strikes in Pakistan, Yemen, and Somalia between 2004 and 2013. In 2006, a strike on a religious school in the Pakistani village of Chenegai reportedly killed 69 children. In May 2013 speech, President Obama responded to mounting criticism of the drone program, saying "it is a hard fact that U.S. strikes have resulted in civilian casualties, a risk that exists in every war." However, the President insisted that the program's benefits outweigh the drawbacks. "Simply put," he said, "these strikes have saved lives."

A playbook example of how to kill a High-Value Target (HVT). 1) Use Pattern of Life Analysis to identify HVT's colleagues. 2) Kill mid-ranking colleague by drone strike. 3) Use the funeral as bait. 4) Strike the funeral, killing up to 83 mourners, unfortunately missing HTV. 5) Continue surveillance two more months. 6) Strike HVT while with his wife at his father-in-laws home. 7) Mission accomplished.

“I no longer love blue skies,” said the boy, whose grandmother was killed by a drone strike. “In fact, I now prefer gray skies. The drones do not fly when the skies are gray.”

The surveilled locations portry people doing everyday, banal activities. But viewed through the lens of a powerful aircraft armed to the teeth with air-to-ground missiles, the footage takes on a new meaning. Sports practice looks like militia training. Vehicles look suspiciously like convoys.

Van Houtryve spoke to WIRED about his video experiment:

"The drone has become the preferred tool of the 'War on Terror.' We live in the most media-connected age ever, and yet the American public has no visual narrative of the drone war. This is a secret war, making it easier to push to the back of our minds or only think about in abstract terms.

"We're told that the drone program saves American lives, and that civilian casualties are avoided with the surgical precision [of the technology]. The former claim is true, the latter is seriously in doubt."

The Bureau of Investigative Journalism estimates that some 2,599 to 4,677 people have been killed in 449 to 574 drone attacks in Pakistan, Somalia and Yemen. Up to 957 of those were civilians.

The 15-second Instagram clips are a preview of a larger work called In Drones We Trust, a full five-minute film which is currently on show at the New York Media Center as part of the Surveillance.1.0-USA exhibit.