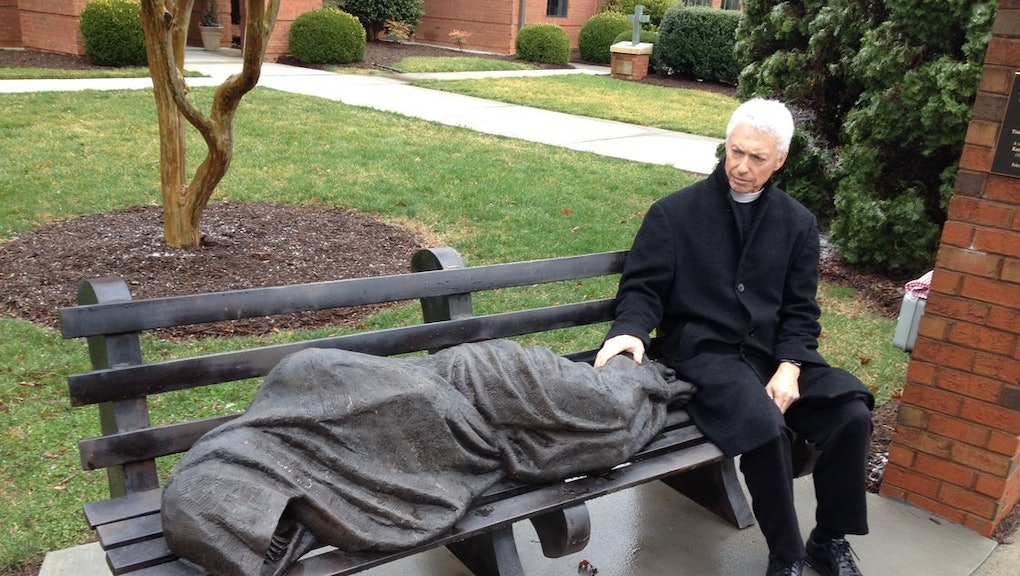 Out in leafy, lakeside Davidson, N.C., an affluent college town 20 miles north of Charlotte, a sculpture of Jesus as a homeless man has sparked some local uproar. Lying blanketed and forlorn on a bench, "Homeless Jesus" has inspired a conversation about homelessness in general, appropriate depictions of Christ and at least one call for his arrest.

The life-size statue is the work of Canadian sculptor Timothy Schmalz who in his artist statement says he's "devoted to creating artwork that glorifies Christ." His "Homeless Jesus" is controversial for many reasons; most importantly because of the pose. The figure depicts Jesus as a man under a blanket, with only his exposed feet, wounded by crucifixation, to give away his identity — a starkly different image than the images Christ on the cross, Christ at the nativity or Chris the redeemer that we are used to seeing.

Textually, this a-traditional depiciton of Jesus is true to his story — one of poverty, charity and asceticism. Though millions may worship him, the realities of what that life would have looked like are an unsettling juxtaposition with our contemporary experience of poverty, as pointedly expressed in Davidson.

Driving by the figure of "Homeless Jesus" one local woman's first reaction was unease; she later called the police. "She thought it was an actual homeless person," David Boraks, editor of the local DavidsonNews.net, told NPR.

Others residents have spoken out against "Homeless Jesus," calling it creepy or insulting or just plain bad for the neighborhood. As one resident put it in a letter to DavidsonNews.net, "My complaint is not about art-worthiness or the meaning behind the sculpture. It is about people driving into our beautiful, reasonly upscale neighborhood and seeing an ugly homeless person sleeping on a park bench."

This type of controversial and somewhat unsettling realism seems to be exactly what supporters and the artist wanted. "We believe that that's the kind of life Jesus had," said Rev. David Buck, rector of the church where the statue was intalled. "He was, in essence, a homeless person."

Davidson's "Homeless Jesus" is the first "Jesus the Homeless" statue on display in the U.S., but more might be on the way. While not entirely a unanimous opinion (St. Michael's Cathedral in Toronto and St. Patrick's Cathedral in New York rejected installing the works largely due to cost), a number of religious officials and bodies have expressed interest and support for the work.

Long before it came to Davidson, Pope Francis was presented with a wooden model of the work, which he blessed and prayed over. Catholic Charities of Chicago intends to install the work later this year, while the Archdiocese of Washington, D.C., and the city of Rome have also discussed the possibly. If it so, it would appear on Via della Conciliazione, in sight of St. Peter's Basilica.

The compelling statue forces observers to consider the fact that more than 600,000 Americans will spend tonight homeless. And while a recent Department of Housing and Urban Development report found that homelessness has decreased by nearly 4% between 2012 and 2013, the aggregate numbers may miss a wider truth.

In short, Jesus is the men, women and children so many of us ignore. And a sculpture on a bench in a small town in North Carolina asks us to acknowledge this.