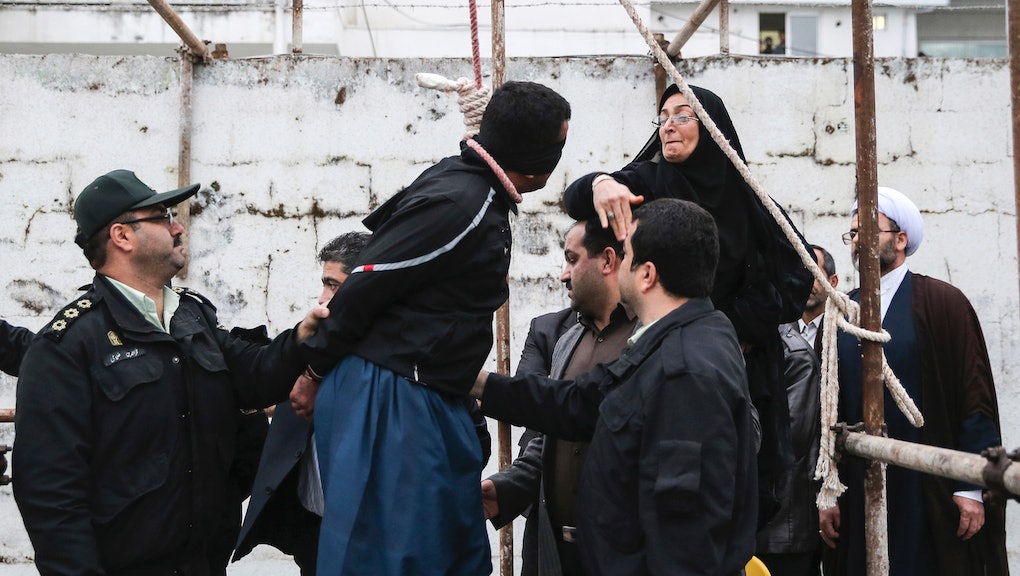 Iranian Mother Stops the Execution of Her Son's Murderer, Choosing Forgiveness Instead

Imagine you had the ultimate chance for revenge, to inflict the worst pain you've ever felt in equal measure on the person who caused it. In Iran, this is part of the legal system: Qisas, the sharia law of retribution, can be applied literally in some cases. One family had the opportunity. Instead, they did something extraordinary.

Seven years ago, 18-year-old Abdollah Hosseinzadeh was fatally stabbed during a street brawl in Royan, a small town in the northern province of Mazandaran. His attacker, another young man known only as Balal, was sentenced to hanging by public execution. Hosseinzadeh's parents were allowed to participate by knocking out the chair that would support him.

When the moment finally came this week, Balal, who wore a black hood over his face, and the crowd that had gathered to watch waited for the drop. Hosseinzadeh's mother approached the gallows.

She didn't kick. Instead, she slapped him.

Balal's family, who had been pleading at the gallows for mercy, broke down. Balal's mother hugged Hosseinzadeh's; both were weeping.

Though the case had sparked national attention, including from public figures like popular sports presenter Adel Ferdosipour, it was a dream that saved Balal. "Three days ago my wife saw my elder son in a dream telling her that they are in a good place, and for her not to retaliate," Hosseinzadeh's father said.

The act is a beautiful twist in a staggering situation. Iran has come under fire worldwide for its high rate of executions: Amnesty International says the country has publicly killed at least 369 people this year alone. Given unreported deaths, that number could be almostnearly twice as high.

Balal may still not be in the clear. Just because his victim's family spared him doesn't mean the state will.

"Qisas regulations in Iran mean that people who are sentenced to death under this system of punishment are effectively prevented from seeking a pardon or commutation of their sentences from the authorities, contrary to Iran's international obligations," Amnesty International's Bahareh Davis said.

Even so, the moment is a powerful critique of the notion of revenge. The Koran urges us to remember that anyone who spares a life saves a whole world. Abdollah Hosseinzadeh may be gone, but he and his family have given us powerful proof in favor of forgiveness.