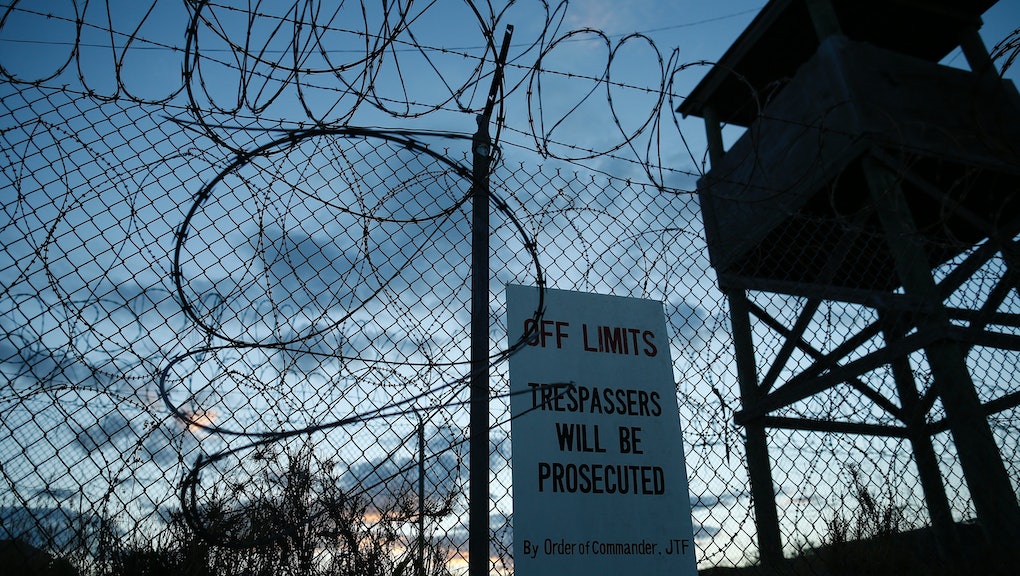 Imagine you are chained with your hands between your legs, crouching. You're isolated in a small, dark room with earphones you can't take off. Queen's "We Are the Champions" has been playing on repeat for 30 hours now at full volume, and you've lost your ability to think. It could go on for months.

Music torture has been common practice for the CIA ever since it began its "enhanced interrogation program" in the early 2000s. The process is designed to "create fear, disorient … and prolong capture shock" in prisoners.

Sgt. Mark Hadsell, a member of the U.S. Psychological Operations team, described the efficacy of the tactic: "If you play it for 24 hours, your brain and body functions start to slide, your train of thought slows down and your will is broken. That's when we come in and talk to them."

Any torture method is of debatable merit — music torture was, in part, popular because it seemed more palatable to the public. But to hear about the experience of people who've been subjected to these songs is to see just how terrible it is to have a beloved song turned against you.

Here are 11 songs that have been turned into torture devices.

1. "The Real Slim Shady" by Eminem

"I heard this nonstop over and over," he reportedly told Clive Stafford Smith, his lawyer and the founder and director of Reprieve, a U.K-based organization determined to end music torture practices. "The CIA worked on people, including me, day and night for the months before I left. Plenty lost their minds."

Mohamed said he could hear others in the prison "screaming and smashing their heads against walls."

British citizen Ruhal Ahmed described the process in a 2008 interview with Reprieve investigators: "I can bear being beaten up, it's not a problem. Once you accept that you're going to go into the interrogation room and be beaten up, it's fine. You can prepare yourself mentally. But when you're being psychologically tortured, you can't."

He said he had been exposed to the torture "numerous times" to a variety of music. "It makes you feel like you are going mad. You lose the plot, and it's very scary to think that you might go crazy because of all the music, because of the loud noise and because after a while you don't hear the lyrics at all, all you hear is heavy banging."

Mohammed al Qahtani, the alleged 20th hijacker of the 9/11 attacks, reportedly received this torture as part of a much larger "musical theme" set up for him. The soldiers dubbed the "bad Muslim" theme.

The continuous cacophony of Aguilera's sexually charged pop anthem was one of several practices meant to make it impossible for him to be an observant Muslim man. Many inmates suffered humiliations like this: Female military personnel would go shirtless during interrogations, give forced lap dances and rub red liquids they identified as menstrual blood on detainees.

Interrogators played Arabic music for al Qatani on the first day of Ramadan on Dec. 7, 2002. Hearing the familiar instruments, he cried out "that it was a violation of Islam law to listen to Arabic music."

This actually isn't Quaranic law; it is more of a cultural precept. Investigators warned al Qatani that it was a sin "to add prohibitions not mentioned in the Qur'an (as he seemed to be doing)."

Al Qatani still insisted "music was forbidden" and broke down stating "he could do nothing about the music that was played in the [interrogation] booth."

Military personnel apparently used Gray's soft rock ballad in their tortures because of the biblical connotations of its title. While interviewing former prisoners, German musicologist Christian Gruny played this song for a Guantanamo inmate, who immediately burst into uncontrollable sobs.

Building off Gruny's research, Suzanne Cusick elaborates that music torture operates by stripping a prisoner of a safe, "interior space." It invades with the sounds and cultural expressions of one's captor and leaves a prisoners with nowhere to hide to "escape the pain."

This is the reason why U.S. soldiers used a lot of patriotic music like Neil Diamond's "America" or Don McLean's "American Pie."

This one is especially sick. It's reportedly the most "overused" torture song in the CIA's arsenal.

Apparently, the song's creator Bob Singleton "just laughed" when he heard of its use: "It seemed so ludicrous that something totally innocuous for children could threaten the mental state of an adult. I would rate the annoyance factor to be about equal with hearing my neighbour's leaf blower. It can set my teeth on edge, but it won't break me down and make me confess to crimes against humanity."

Granted, he's never heard it blasted at ear-splitting volumes for weeks at a time.

Pakistani-Englishman Moazzam Begg, arrested by the CIA in Pakistan in 2002, wrote one of the most comprehensive memoirs describing the tortures he witnessed in the U.S. military prison system. During his stay at Bagram, Afghanistan, he suffered the Bee Gees.

He thought it was a joke at first: "Once they even played the Bee Gees' Saturday Night Fever soundtrack all night long. 'Hardly,' I thought,'‘enough to break anyone I knew.' ... 'We'll talk. We'll all talk,' I said in half jest when they played it, 'just turn that crap off please!'"

But as the torture began to stretch on, it became unbearable. "It was terrible, there was no light at all, it was so tight, so hot, sitting in there. You can't see or do anything, nothing to see, nobody to talk to, nothing to do but bang the walls. And then to have the music blasting ... I met several people who'd been in there ... [who were] ready to tell the Americans anything they wanted, whether it was true or not."

The whole idea behind music torture is to create a method of torture that does not seem offensive to the public.

The above "Saturday Night Fever" is some of this "publicly palatable" music. Investigative reporter Justine Sharrock also singles out the Meow Mix theme song: "You almost have to stop yourself from laughing because you realize this is actually torture." After a particularly long heavy metal session the sudden shift in dynamics this song heralds can be especially maddening.

9. “The Beautiful People” by Marilyn Manson

Begg, the man who was forced to listen to disco, said he was not as unnerved by the music torture as others. The men who suffered most were those coming from more rural parts of Afghanistan and Yemen, who had never been exposed to Western music before. They received the most horrifying introduction imaginable.

The worst part of the whole ordeal for Begg was the sleep disruption. "Sometimes it would stop at 3 a.m. or so, but your ability to sleep was already disturbed. You lose the ability to have a routine sleep. ... The other thing that they did was play the music at various times ... the random aspect of when it would start or end was frustrating, makes you tired, agitated, upset, on top of all the other situations of not knowing when you're going to be released, interrogated, or moved to those cells.

"Many people suffered from various kinds of anxiety attacks. People hyperventilated, losing control of their senses, hitting their bottle of water against the cell, against other people, trying to scrape their hands against the concertina wire, sometimes breaking down and crying."

Tony Lagouranis, a former U.S. Army interpreter, almost lost it one day while interrogating a prisoner who had been receiving some very heavy metal: "As Umar knelt, we took turns yelling our questions into his ears. His head twisted around as he tried to figure out where we were. After about a half hour, he started moaning. I imagined he was crying behind his sandbag. We pushed forward, getting harsher with our words. My throat was sore, my ears were ringing, and the lights were disorienting. I realized I wasn't going to be able to stand this much longer.

Another night: "Khalid was right where I left him, calm and serene. When I looked at him, the anger surged, amplified by the flashing lights and the booming noise. A thought flashed through my head: 'Chop his fucking fingers off.'" Lagoruias was immediately revolted that the thought had even suggested itself. He left Khalid's fingers whole.

U.S. Navy veteran Donald Vance suffered this torture after the U.S. Army raided the Iraqi security firm he had been investigating as an unpaid FBI informant.

When all the employees were rounded up, he was treated as a suspect, taken to an unofficial prison camp and tortured with song.

Vance would catch himself singing along to songs he liked. "I can't remember how many times I heard Queen's "We Are the Champions.'"

Vance survived due to his military training. He started to talk to himself, telling himself jokes, trying to keep a rational train of thought going. He knew if he let the music completely "mask his thoughts," he would never get his mind back again. This method is likely what helped Vance emerge from this prison a "damaged" but not "broken" man.