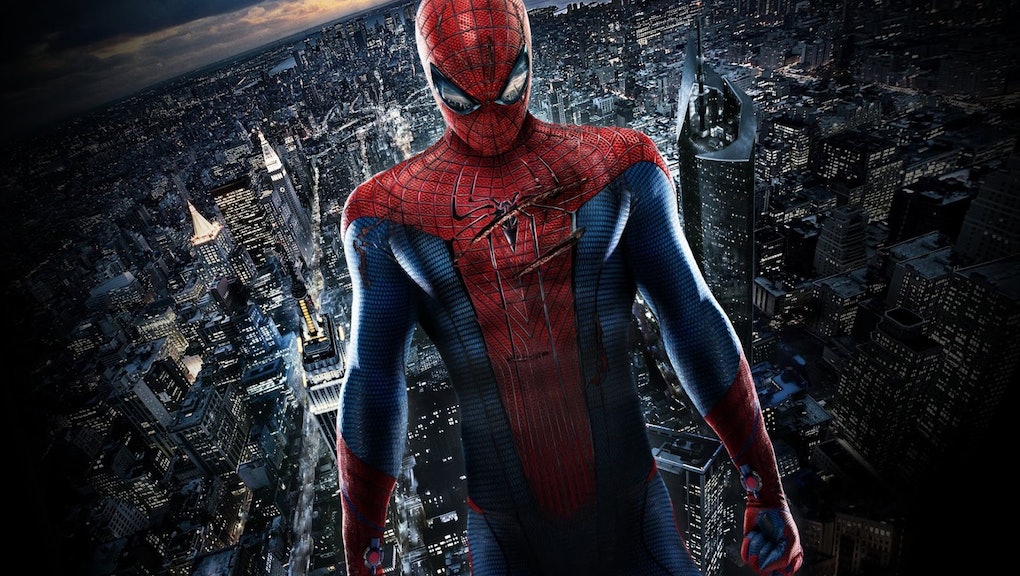 The True Identity of Spider-Man: Peter Parker Is Actually Jewish

Just in time for Passover, Spider-Man is officially Jewish. Well, according to Andrew Garfield, who plays Spider-Man, anyway. The revelation might seem irrelevant, but the truth is Jewish superheros are few and far between — in fact, they are countable on one hand. A Jewish Spider-Man would be the most visible and popular Jewish icon in the superhero arena. And even today, any kind of diversity in the superhero world is still a big deal.

"Spider-Man is neurotic. Peter Parker is not a simple dude. He can't just switch off," Garfield, who is Jewish himself, told Time Out London. "He never feels like he's doing enough. And Peter suffers from self-doubt. He ums and ahs about his future because he's neurotic. He's Jewish. It's a defining feature."

Garfield's statement is not the first time we've heard that Peter Parker is Jewish. View him through the lens of stereotype and the character is nebbishy, neurotic and a resident of Queens who deeply loves his Aunt May. Take things out of stereotype into fact and among comic book scholars, there is an argument that Spidey's story works as allegory of the post-war Jewish experience.

Recently the question of his religious and cultural roots has gained some momentum and publicity. Producer of the Spider-Man films Avi Arad, also credited as the "father of the modern comic book movie," opined in 2012 that Spider-Man is obviously Jewish. When asked point-blank in an interview about Peter Parker's religious background, he replied, "Well, this is a somewhat controversial statement, perhaps, but to me when Stan Lee, excuse me, Stanley Lieber, puts the family in Forest Hills, this is a first sign. These are practically shtetl Jews living in Queens. You look at Aunt May: She is tough as anything, tough as nails. She is a defender of the family. Uncle Ben thinks he is the protector, but all she needs is 'You, you go in the basement, sweep out the garbage.' This is like a shtetl play. Peter Parker, of course — his primary defense is his wit."

That Spider-Man is Jewish, or colored with the experiences of post-war Jews, could easily have sprung from his creator, the beloved and prolific comic book writer Stan Lee. The son of Romanian-born Jewish immigrants, Lee created countless memorable characters, men, women and more, whom he humanized with a Jewish sense of doing good. Lee once said of his religion and his writing: "To me you can wrap all of Judaism up in one sentence, and that is 'Do not do unto others … ' All I tried to do in my stories was show that there's some innate goodness in the human condition. And there's always going to be evil; we should always be fighting evil." His quote offers an undeniable resonance with the oft-quoted Spider-Man mantra: "With great power comes great responsibility."

Lee also compared his Spider-Man character to David, the biblical figure who, in addition to defeating Goliath, was also saved from death by the web of a spider.

While still officially unoffical — it was Garfield, not Marvel, who made the claim — Peter Parker joins an awesome pool of Jewish superheroes, including Ben "The Thing" Grimm ("It's clobberin' time!"), Batwoman (reintroduced in 2006 as Kate Kane, lesbian of Jewish descent) and epic mutant supervillain Erik "Magneto" Lehnsherr.

Behind the scenes, as writers and artists, Jews also shaped the direction and character of comic book history, especially superheroes. In addition to Lee, both the creators of Batman and Superman were Jewish, as are Art Spiegelman (Maus), Michael Chabon (The Adventures of Kavalier and Clay) and the legendary Will Eisner, literally the gold standard for comic book excellence.

As a comic book fan, Lee, Eisner, Batman creator Bob Kane — these are my superheroes. Peter Parker may now be seen by the masses as Jewish, but the experience of being an American Jew — an immigrant, an outsider — has unmistakably been an essential part of comicbookdom throughout its history. Welcome to the Chosen People, Spider-Man.