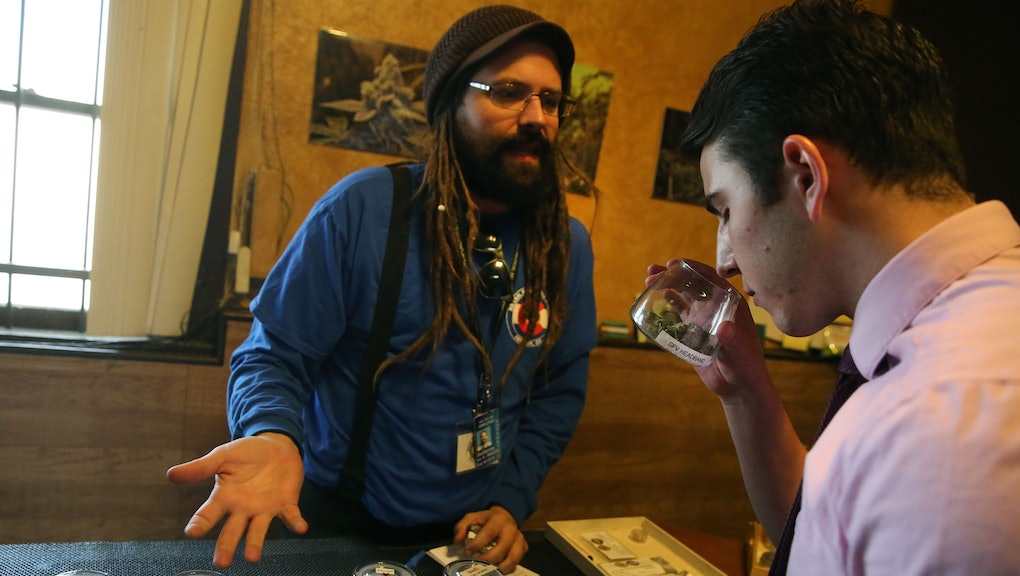 Here's the Real Story Behind That 'Marijuana-Changes-Your-Brain' Study

"I think I saw one headline that was 'Marijuana reshapes the brain' and I groaned — that's not what we did," said Dr. Jodi Gilman, 31, author of the now-famous Harvard Medical School/Massachusetts General Hospital study on marijuana's effects, in an interview with PolicyMic.

Research is full of nuance, and nuance sometimes gets lost in the conversation. The collective freakout over this study had to do with its findings: Certain regions of the brains of people who smoke marijuana are structurally different than people who don't. That got interpreted, at least in headlines and ledes, as marijuana changes your brain.

"The conclusions were modest in the paper — we never say marijuana causes these changes," Gilman said, who's a neuroscientist with a Ph.D. from Brown University. "The media may have given that impression in headlines, but the study doesn't show causation."

It was a classic A and B study. Take group one and see how they're different from group two. That's it.

The experiment is a launching point for further research. It was conducted with 40 people from Boston, ages 18-25. Half of the participants used marijuana at least once a week but weren't dependent on the drug, and the other half weren't marijuana smokers. The smokers in the study, the experimental group, started smoking between the ages of 14 and 18 years old (16.6 years old with a standard deviation of two years). They were hooked up to an MRI, and Gilman and others found that the experimental group had structural differences in the nucleus accumbens and the amygdala regions of their brains (which relate to motivation and emotion).

MRI from the study, which shows (far right) where the marijuana group has greater brain density than the control group. Image Credit: Journal of Neuroscience

"The main point is there are differences in the brains of these two groups. The subtlety is we don't know if those differences are causal and relate to function or behavior," Gilman says.

There are at least a few different explanations for the differences and their meaning. For example, maybe people who use marijuana at a young age have natural differences in their brains. Or maybe a structural change in your brain, like a higher density amygdala, doesn't necessarily lead to good or bad effects.

There's way more research that needs to be done and that's Gilman's largest takeaway for others.

Since the study came out, Gilman has received a range of feedback. Some people criticize the small sample size — she states that the next step is to conduct the study with a larger group — or the funding source, the National Institute on Drug Abuse, among others (which got a laugh out of Gilman: "Your data is your data").

"Since this paper has come out, some people think I'm a crazy conservative against legalization," she says. "I don't think anyone should go to jail for using marijuana — people can do what they want — I just want them to know what's happening to the brain."

"It took us 40 years to convince people that smoking cigarettes was bad for them and by then, people had all these negative effects. I don't want it to take 40 years to figure out the effects of marijuana," Gilman said.

That sounds reasonable to me, and until we know more, always be a skeptic.