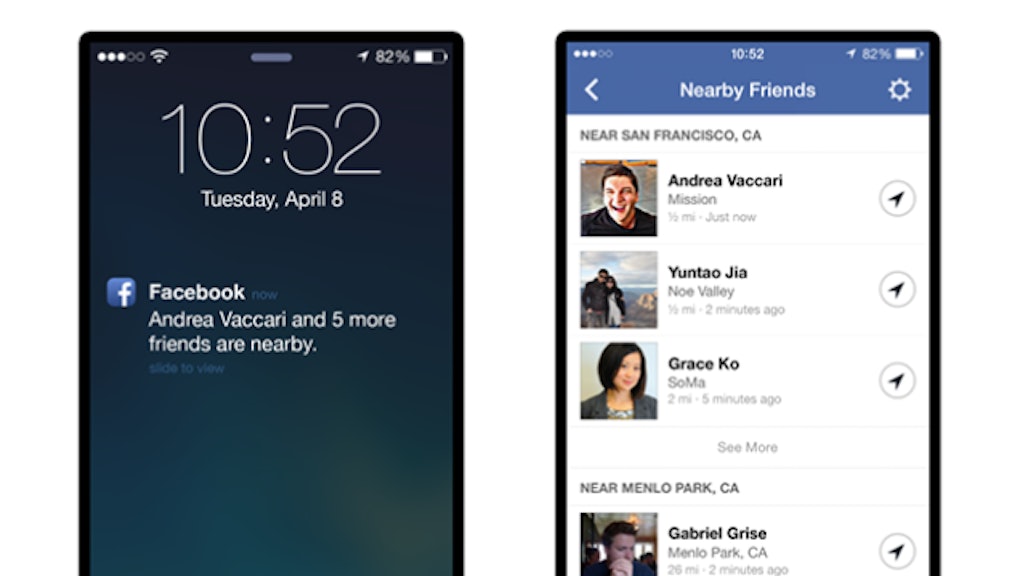 The news: Imagine you're at a big party but don't know a lot of people there. You wish your friends were with you, but it's impossible to find anyone in the crowd. Wouldn't it be handy if you could just flip through your phone to see if any of your friends were there?

That's the idea behind a new feature that Facebook rolled out Thursday called Nearby Friends. By opting into the feature, you and your friends can see each other's locations through live, near-instant updates. With the iOS and Android apps, you can also choose to receive notifications when your friends are nearby.

"The idea is to make it really easy to discover when someone is around you, and meet up and spend time together," said Andrea Vaccari, a Facebook product manager.

Quite simply, Facebook wants to take social networking from the screen to the streets, so that when you are close by someone you interact with online, you can have a spontaneous, in-person hangout.

How it works: Nearby Friends is not a default setting — once you opt into the feature, you can see the locations of others who have opted in, organized by neighborhood. You can then tap on your friend's location to message them to meet up. Because it's in reciprocal share mode, the people you track are the only ones who can track you back, and you can play with your privacy settings to decide who you want in your inner circle. Basically, you don't have to worry about unwanted creepers.

That said, Facebook must have very strong security for this feature. The last thing anyone would want is a clever hacker breaking into the servers and gaining access to the location information of any user of his or her choosing. That could be very, very bad.

Facebook says it has also developed an algorithm to only send notifications when you are near someone you wouldn't expect to see, so you won't get bombarded by alerts the moment you walk into your office and see your work friends, or come home and see your siblings.

As long as the feature remains on, Facebook checks your location every 15 minutes, although no one but you can see the exact information. The data is stored on your private Activity Log, which you can erase at will. You can also choose to share your exact location with a friend for a limited amount of time, which is helpful when you're trying to find each other in a crowd. After that time expires, you're back in standard mode.

This is not the first app of its kind. For the past couple of years, people-finding apps have been struggling to break out. A gamut of splashy geolocation apps — Highlight, Sonar, Glancee, Apple's Find My Friends — have failed to impress, while others remain popular (Foursquare, Tinder).

"It's not an easy launch. Some people won't want to use it, but they don't have to," said Vaccari, who founded the Facebook-acquired Glancee. "My hope is that when they're reminded with News Feed stories about the opportunity to meet friends, people will start to appreciate that. Even if you have the impression that this is scary, it's not."

But Facebook doesn't have the best track record. And they know it, too. Facebook tried to test a version of the feature last year called Find Friends Nearby, but it was unceremoniously dropped after the initial news was met with backlash and privacy concerns. Given the privacy scandals the company has faced in the past, it's easy to see how people would think Facebook could also use the new feature to sell your data to generate localized ads.

And of course, there are downsides. The feature might be useful in certain circumstances, but you won't be in the mood to hang out all the time. And if you don't share your location data with some friends, they might take it personally. TechCrunch highlights unsavory scenarios you could easily face: your boss seeing you party at a club on a weeknight, jealous partners stalking each other and so on.

There are "anti-social network" apps like Cloak that help you avoid people you don't want to see, but with Facebook's giant user base, you will undoubtedly get bugged by your middle school friend to turn the feature on and hang out the next time you're in the neighborhood. As with any new social networking tool, there will be a grace period of figuring out the proper etiquette — and it's going to be pretty annoying until then.