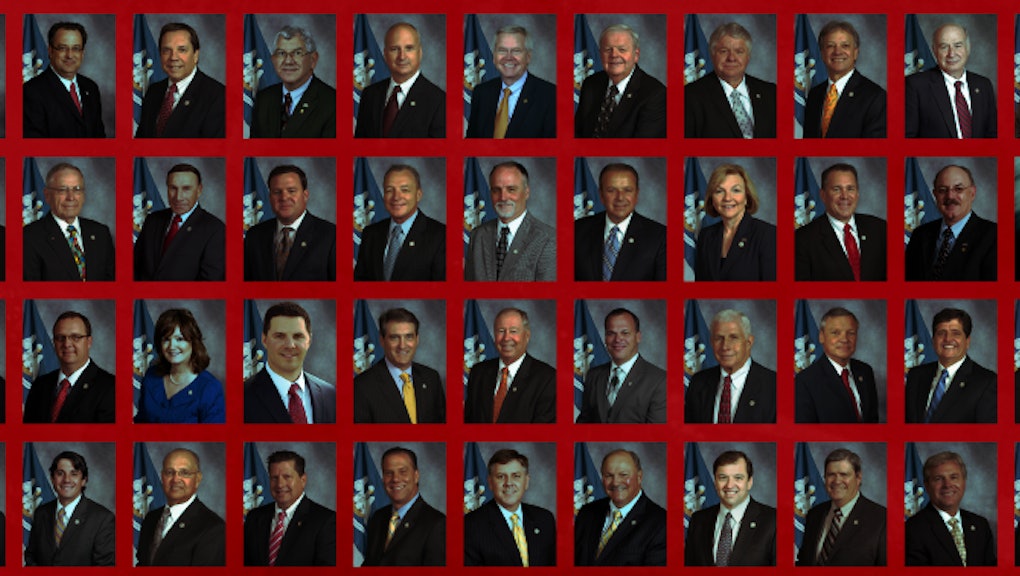 Here Are 67 Smiling Reasons Why Homophobia Still Exists in America

The year is 2014, President Barack Obama has publicly endorsed same-sex marriage, DOMA is dead, states around the nation are pushing to enact same-sex marriage laws — and gay sex is still symbolically illegal in Louisiana.

Yes, you read that right. Despite all of the progress made so far on LGBT rights, on Tuesday, Louisiana voted to uphold the state's anti-sodomy law, 67-27, despite it being ruled unconstitutional by the Supreme Court, in their landmark 2003 Lawrence v. Texas decision.

In its decision, the court ruled that laws prohibiting sodomy seek "to control a personal relationship that, whether or not entitled to formal recognition in the law, is within the liberty of persons to choose without being punished as criminals."

Unless you live in Louisiana?

In fact, in addition to Louisiana and Texas, Idaho, Utah, Michigan, Virginia, North Carolina, South Carolina, Florida, Alabama, Mississippi, Kansas and Oklahoma have all maintained their own anti-sodomy laws, despite their direct conflict with the Supreme Court's decision. In three of these states — Kansas, Oklahoma and Texas — such anti-sodomy laws pertain exclusively to "homosexual conduct."

The Louisiana bill in question, HB12, proposed to amend "crime against nature..." and was introduced in January by State House Representative Patricia Smith (D-Baton Rouge). Although it seems painfully obvious that there is no reason on Earth to maintain such a law, Smith's proposed bill was a direct response to the targeted arrests of gay men in her district who were profiled and lured by undercover police to agree to consensual sex. At least 12 men have been arrested in this "sodomy sting" since 2011, despite the fact that prosecutors refused to bring charges in every single case.

Opponents who voted against the bill illogically claimed that its passage would make children more vulnerable to sexual predators. "Just because we decriminalize things doesn’t make it right," said State Representative Valarie Hodges (R-Denham Springs), adding that the vote was "a vote of conscience." This is the kind of offensive, backwards logic that has perpetuated damaging and scientifically disproved stereotypes about the LGBT community for decades. The difference? This vote took place this week, not in the 1930s.

Without further ado, here are the 67 different lawmakers, both conservative and liberal, who voted to make sure an unconstitutional, offensive and all-around absurd anti-gay law should remain on their state's books.