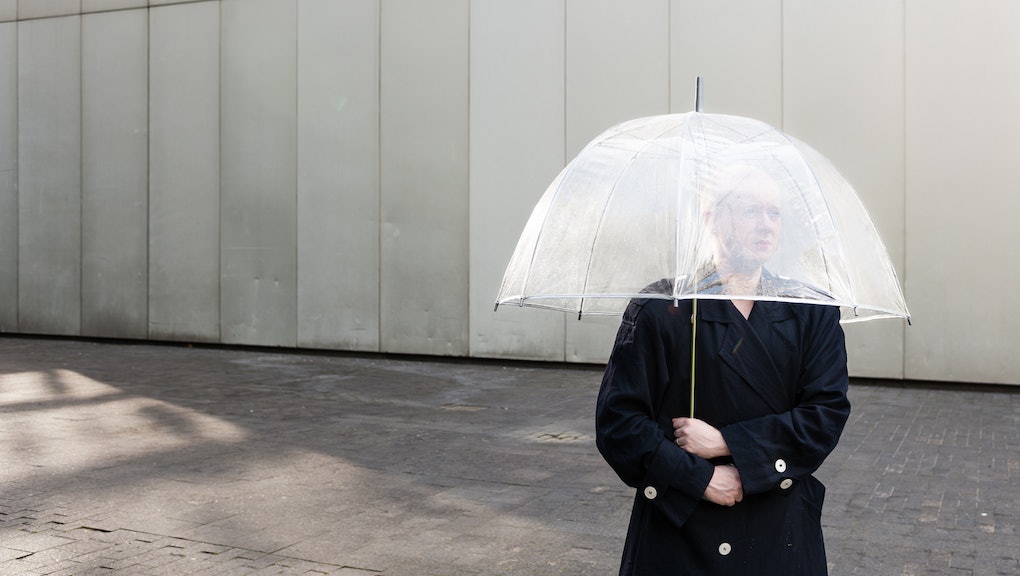 These are just a few examples of the vividly depicted portraits that Cole, a transgender artist living in Boston, has assembled for "Other Peoples' Clothes," a stunningly realized collection of photographs in which Cole dresses in the clothing of different characters in order to explore their universes. For Cole, putting on someone's clothes is more than walking a mile in their shoes. Artistic empathy is a way to become someone else, if just for a moment.

The photographs are quietly intimate, as if we are stumbling accidentally into these peoples' lives. It gives both Cole and his viewers an opportunity to experience an intimacy not usually on display, a chance to see something we aren't often allowed. By documenting moments as small as someone finishing the last page of a book or getting out of bed, Cole works in the Hopperesque experience of the everyday, a microcosm that stands for infinity.

What does it mean to perform and depict someone else's identity? For Cole, the radical empathy displayed in these photographs was a way to find his own story in someone else's. As he put it in an interview with PolicyMic, the journey was about understanding these characters' "shame and failures," and through that process, his own "desires and motivations."

The idea began to sprout after Cole moved from Indiana to Boston and found himself lost in the city's thrift stores. "I tried imagine who had owned the stuff and imagine what lives these people would lead," Cole said. The act of dressing up as these characters allowed him to bring their stories to life and make the worlds he was imagining more real.

Throughout the photographs, Cole's own image is, as he puts it, the "common denominator," the focal point of each of the universes in miniature that he presents. Working with the found objects of clothing allowed him not only to tell a version of their stories but also to comment on his, making his own trans self-identity into a canvas. Cole said, "My goal was to let the person fall away so you can pay attention to the clothing and the gesture."

Each of his portraits is both a rendering of an identity and a performance of it, allowing him to queer the clothing itself. In Cole's photographs, the clothes we wear are both a culture and a costume.

What makes the images so powerful and alluring is the way Cole draws attention to his own self, as he eschewed wigs or makeup for the photographs. Cole found himself the most natural model for the photographs because he isn't a blank canvas but a heavily politicized body. "It's fascinating what people will assume I am based on clothing and context and what they glean about who I am," Cole said. "It's the space around clothes."

Because his gendered look is rather ambiguous, Cole felt it allowed him to play all these different parts, whether man, woman, young or old.

But what he was looking for in making these portraits wasn't to problematize gender but to use clothing and costume as a way into peoples' lived realities, seeing how his own story might intersect with theirs. "I don’t know what it's like to have a ton of money or be an older woman," Cole told me. "Those aren't my exact lived experiences, but if you boil down the circumstances and feelings, there's something I can relate to."

Cole said it took him "a long time" to figure out how their stories connected with his. "There's this commonality," ” Cole explained. "Everyone knows what it feels like to have your desires and expectations not match the realities of their life."

Those stories might have a particular relevance for queer and transgender viewers, who may be able to see their own complicated relationships with gender in Cole's art. But the found space depicted in these photographs serves a larger purpose. The mise-en-scene isn't about telling one person's story but focusing on a larger narrative, a space where viewers can connect to what's underneath the clothes. In this way, Cole said that art can "help us understand and think about the world."

Caleb Cole might not be wearing our clothes, but if you look close enough, you'll find yourself in the picture, too.

You can find "Other Peoples' Clothes" online on Cole's website, www.calebcolephoto.com. He will also be exhibiting a collection for a solo show at Boston's Gallery Kayafas in December.