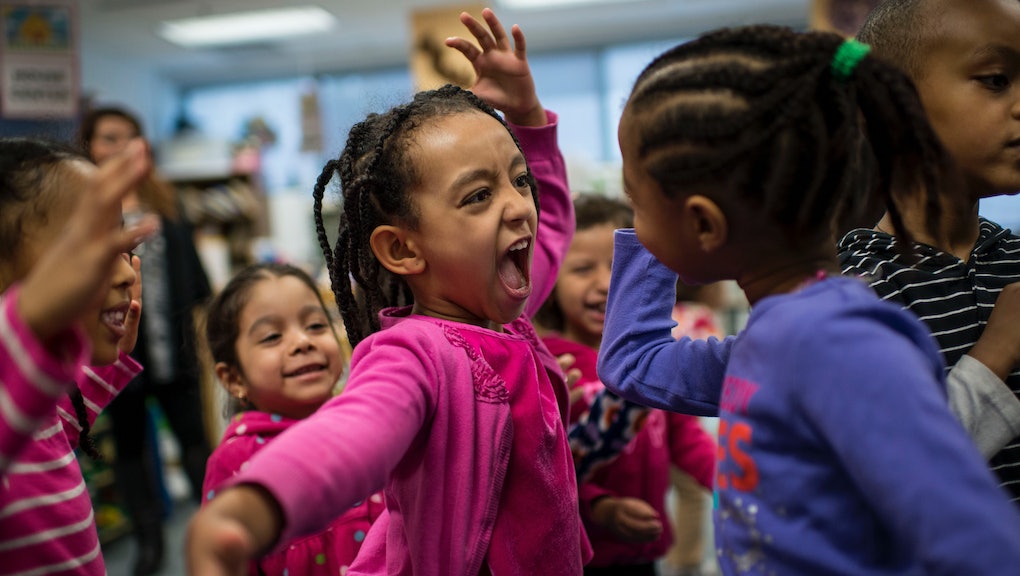 7 Lies We Have to Stop Telling About African-American Girls

In February, President Barack Obama stood before a group of African-American boys (and other boys of color) in the White House to announce his $200 million dollar initiative, "My Brother's Keeper," an effort to help African-American young males reach their full potential. It was an important moment, a chance for the president to acknowledge that the nation's long history of racial disparities has left some disadvantaged. But noticeably absent from the press conference were African-American girls.

There is a myth that African-American girls generally fare better than African-American boys — that they somehow have it easier. This creates a potentially damaging narrative that may ultimately prevent society from truly empowering these young women.

Here are seven myths that we need to stop repeating when it comes to African-American women and the achievement gap.

According to a study by the civil rights division of the U.S. Department of Education, 12% of black female students received at least one suspension, compared with 2% of white female students and 6% of white male students. Black boys are more likely to be suspended than any other group, at 20%.

Contrary to the mythological "angry black woman" depicted in pop culture, research suggests young black women are not more prone to angry outbursts or violent behavior. In fact, a 2009 study spearheaded by researcher J. Celeste Walley-Jean at Clayton State University found that black women "reported significantly less frequent angry feelings in situations where they may receive criticism, perceived disrespect and negative evaluations (i.e. angry reaction). Furthermore, younger women reported a greater tendency to experience and suppress intense angry feelings rather than expressing them either physically or verbally."It is true that the number of African-American females in prison is lower than African-American males. However this doesn't mean African-American women aren't attached to the penal system like African-American males. Sociologist Beth Ritchie, in the Justice Department's "Research on Women and Girls in the Justice System" report, notes that African-American females have a more complicated relationship to prison than other groups because of the role that their race, socioeconomic status, gender and status as crime victims play in their criminality.

2. It's only African-American male students who are funneled into the school to prison pipeline.

According to the report "Incarcerated Women" by the Sentencing Project, the lifetime likelihood of imprisonment for women is 1 in 56. However African-American women have a 1 in 19 chance of becomging incarcerated compared with 1 in 45 for Latina women, and 1 in 118 for white women. In 2010, African-American women were incarcerated at three times the rate of white women (133 per 100,000 compared with 47 per 100,000).

African-American female educational attainment has risen very slowly over the past few decades. According to a Center for American Progress report, the graduation rate for female black students, while higher than their male counterparts, remains firmly behind comparable rates for white women, Latina and Asia-American women — 21.4% of African-American female students held a college degree or higher in 2010, compared to 30% of white women.

The report also highlights that only 2% of African-American female students are represented in science, technology, engineering and mathematics. Perhaps most discouraging is the most recent work-life earnings census data, which shows that white women — regardless of their educational attainment — will earn more among full-time, year-round workers than their African-American female counterparts. This data is consistent with information from Northwestern University's Devah Pager, who found that white men with felonies have an easier time finding employment than African-American males with high school diplomas.

There are more white Americans participating in the Supplemental Nutrition Assistance Program (SNAP) than there are African-Americans. However, the percentage of African-Americans receiving these benefits is higher, according to a 2013 Pew study.

But because of racial bias and exaggerations perpetrated in part by President Ronald Reagan during his 1976 presidential campaign, the public has long viewed African-American women without traditional markers of success as exploitative and lazy. This stereotype persists despite the fact that 47.9% of families receiving government benefits are working Americans, 13.2% of welfare recipients were non-working adults and the Personal Responsibility Act and Work Opportunity Reconciliation Act of 1996 restricts anyone from receiving welfare benefits indefinitely.

5. It's only African-American boys who are discriminated against in school.

The Black Youth 100 (BYP 100), an African-American youth activist organization based in Chicago, recently held a discussion on the future of African-American girls and women. BYP 100 asked a simple question: Who will keep my sister? If the litmus test is African-American men then, yes, African-American women are keeping themselves. But by the same token, patriarchal programs like My Brother's Keeper and the Open Society Foundations' $30 million Campaign For Black Male Achievement will not protect black women.

African-American women need to be brought into the conversation precisely because they have been misrepresented for so long. Programs like the San Francisco-based Black Girls Code, a nonprofit focusing on STEM education, life skills and sisterhood for African-American girls, is a good start. But so far, similar programs are few and far between.

University of Wisconsin-Milwaukee psychology professor Diane Pollard found that African-American women at the college level self-reported lower aspirations and lower self-esteem than their male counterparts — even though they were more likely to graduate. Pollard's research points to the fact that African-American women and girls often suffer in silence, as harmful narratives take their toll on student ambitions.