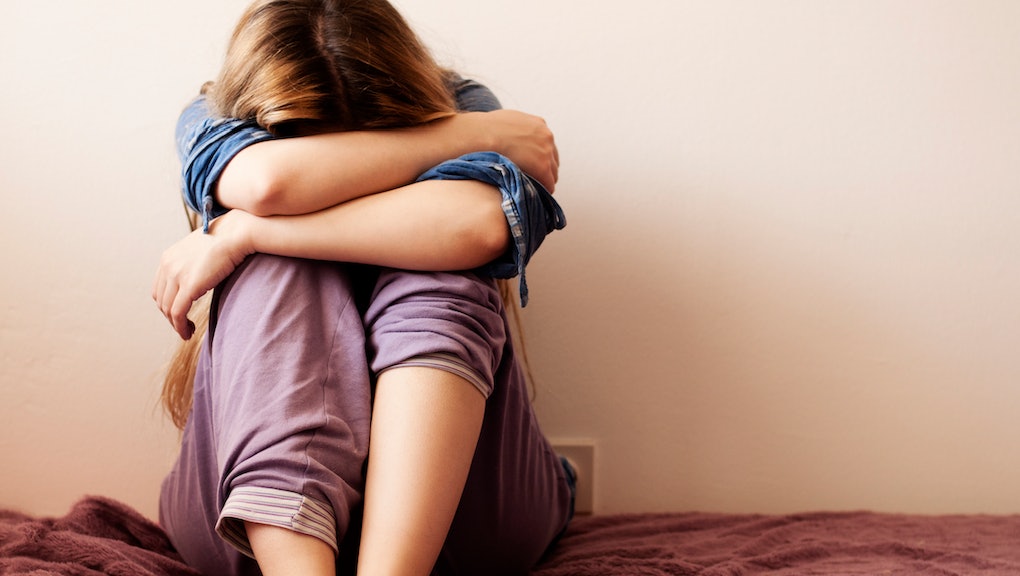 "Can You Call it 'Rape' If He Makes You an Omelet in the Morning?"

Until the day she found herself checked into Vanderbilt Hospital's Psychiatric Center, Sarah Thomas referred to a sexual assault at the end of her freshman year of college as simply a "very bad night." When her psychiatrist instead used the R-word to discuss the incident, she was taken aback.

"I never had considered myself a rape victim," Thomas wrote in a piece detailing her experience for xoJane. "Can you call it 'rape' if he makes you an omelet in the morning?"

In all, it took Thomas 10 years to fully acknowledge that the night was more than "a bad memory," and to call the evening what it really was: rape.

Thomas' story is familiar to many. Every year, thousands of young men and women experience "bad" nights that legally fall within the definitions of rape or sexual assault, but because they weren't violent, didn't involve the heteronormative definition of sex or were so clouded by alcohol or fear that consent was never explicitly denied are not characterized as a crime — even by the survivor.

The frequent confusion and denial surrounding sexual assault make up the basis of a forthcoming study in the journal Gender & Society, in which sociologist Heather Hlavka concludes that sexual violence and harassment are considered part of everyday life for many middle and high school-aged girls. Hlavka interviewed 100 youths between the ages of three and 17 years old, and found that they frequently wrote off harassment and abuse, noting the female subject "overwhelmingly described [it] as 'normal stuff' that 'guys do.'"

Rape and sexual assault are among the most under-reported crimes in the world, but until now little consideration has been given to the fact that some survivors don't report because they do not realize that they were raped in the first place.

Last week, the Twitter hashtag #WhyIDidntReport emerged as a powerful chronicle of the nuanced reasons many have chosen not to report their assaults to law enforcement. Some survivors echoed the sentiment of Hlavka's study, writing that they kept silent because it took them, like Thomas, a long time to realize or accept that what happened to them was a big enough deal to warrant dealing with at all.

This doesn't mean that these survivors haven't suffered. In a culture primed to believe that sexual harassment or violence, especially that against women is normal, the oft-repeated mantra that "boys will be boys" may be used to rationalize violations in a survivor's mind. This thinking, combined with the media's consistent overlooking of oral and non-heterosexual rape, can result in some survivors dismissing their pain as invalid, and denying themselves the resources they may need to heal as they struggle with the shame and self-blame that so often accompany sexual trauma in isolation.

Angie Robinson was 18 was she was orally raped at a party, but it took 24 years for her to openly admit that she was assaulted. And at one point, her husband remarked, "At least it wasn't, like, 'war time rape.'"

The common image of rape remains one of violence and dark alleyways, of screams and fists hurled against an armed and hooded stranger. Despite the fact that 66% of rapes are committed by someone the victim knows, 89% of reports do not mention the use of a weapon and 70% of victims report no physical injuries, this narrative of blood and bruises persists. The horror of stranger rape should never be diminished, of course, but redundant qualifications like "forcible" or "legitimate" trivialize the psychological trauma of violations that were not explicitly violent, and can clearly skew societal perceptions of assault. The girls in Hlavka's study, for example, doubted that anything besides "forcible heterosexual intercourse" counted as an offense.

This lack of recognition and subsequent support can be very painful. Robinson, who now works as an author and inspirational speaker for survivors of sexual trauma, said that it took time to allow herself to be angry about what had happened. "I was mad myself for not getting over it. ... I was mad that I couldn't explain what happened because I didn't want to use the language [of sexual assault]."

"I never think it's a big thing because they do it to everyone."

The minimization of nonviolent, non-stranger rape can also result in perpetrators not believing their actions constitute a crime. Treating people with respect and bodily autonomy shouldn't be a revolutionary concept, yet defendants have protested that they "didn't know what rape looked like" while attempting to excuse their behavior. During the infamous Steubenville rape case, for example, one teen witness testified that he didn't stop his football teammates from penetrating a blacked-out 16-year-old girl with their fingers because, "It wasn't violent. I didn't know exactly what rape was. I thought it was forcing yourself on someone."

But perhaps the most disturbing aspect of the Steubenville case, beyond the media's initial and unapologetic sympathy for its now convicted rapists, was its familiarity. Drunk girl gets man-handled by a group of boys, then viciously slut-shamed? Welcome to high school. One teenage girl in Hlavka's study said, "They grab you, touch your butt and try to, like, touch you in the front, and run away, but it's okay, I mean... I never think it's a big thing because they do it to everyone."

Trent Mays, left, and Ma'lik Richmond before the start of their trial on rape charges in juvenile court in Steubenville, Ohio. Image Credit: AP

"I would have called it 'rape' had it happened to someone else."

Even when a sexual violation is recognized as being "wrong" rather than "normal," using the specific language of rape and sexual assault can be traumatic in and of itself. Doing so involves a certain absolution of guilt that, while justified, remains elusive for many raised in a culture that shames survivors of sexual assault and rape for the crime committed against them.

"Don't get me wrong," Thomas told PolicyMic via email, "I felt real hatred and repulsion for the guy. But it was somehow easier to blame myself than be like: 'This really terrible thing happened to me, and I was a victim, and I should tell someone about it.' Ha! I still didn't even write 'I was raped.' I said, "this terrible thing.'"

For Thomas, much of this difficulty stemmed from reconciling the language with her feelings of responsibility. She writes, "I would have called it 'rape' had it happened to someone else. If I were listening to a friend over the phone. But I couldn't because of my own culpability. Maybe even an inflated sense of self: I am badass; I could have done something."

Robinson refused to call her experience rape due to a similar sense of self-blame. Ultimately, it wasn't until she began therapy for PTSD that she was able to use the term, and even then the process wasn't easy. "I kept trying to convince my therapist that she was wrong, that it wasn't really rape, that it was just a bad thing that happened," she told PolicyMic.

When one therapist suggested that Robinson write her story down in the third person, she was finally able to accept the terminology. "When I read my story in third person, I could look at it like this happened to that girl, rather than I allowed something to happen to me. It was a tremendous turning point for me ... I was finally able to say that that man raped me. After that point, I finally felt the freedom from the self-blame."

"I deserve to heal."

Only an estimated 40% reported each year, but the point shouldn't be about attempting to force more survivors to come forward (although legal prosecution would certainly increase with better, broader understanding of what rape actually is).

Putting a specific label on particular crime does not necessarily bring relief, nor importantly, a cure. Nevertheless, recognizing the reality of rape and assault ultimately can help survivors move on. Jennifer Marsh, RAINN's vice president of Victims' Services, told PolicyMic, "Identifying [an incident] as sexual trauma, rape or sexual assault may then allow survivors to access services from their local sexual assault service provider, rape crisis center, individual counseling, group counseling — and I think that can really facilitate healing."

Beyond finding established resources, recognizing that they are not alone in their experiences can help validate survivors' feelings, nurture a sense of solidarity and prevent them from suffering in silence. Thomas recalls that when she wrote her article, "There were over 300 comments, if I remember correctly, of women saying: 'This happened to me, and I was so afraid to tell,' 'I have blamed myself for this happening to me for years,' and reading them, I just was moved to tears. It felt strangely relieving, because while it was horrifying to see the commonality there, just piling up in the comments section, it also felt like being embraced."

Ultimately, survivors deserve to know that they are entitled to their anger and pain, that there is no excuse for what happened to them and that they have the right to heal. Robinson said, "Regardless of the fact that it wasn't a stranger jumping out of the darkness when I was walking alone somewhere, there can still be trauma and heavy amounts of shame. It's not insignificant, what happened to me. I deserve to heal. I deserve to get the help that's out there."

If you or someone you know has been affected by sexual violence, it's not your fault. You are not alone. Help is available 24/7 through the National Sexual Assault Hotline: 800-656-HOPE and online.rainn.org.