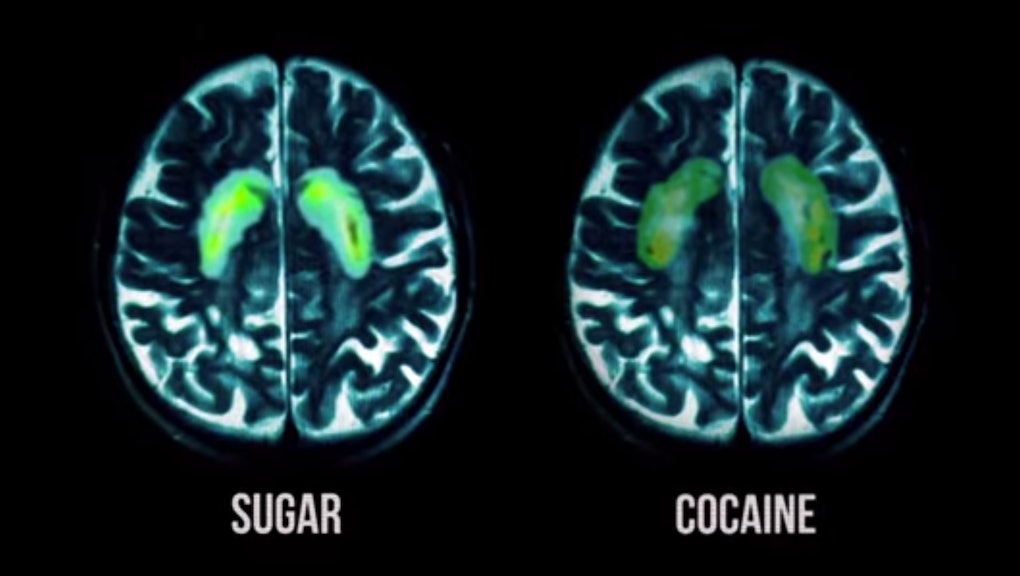 What Happens to Your Brain on Sugar, Explained by Science

For comparison, this image shows PET scans of obese and cocaine-addicted brains.

Notice that the normal brain has a lot more red stuff highlighted in it — called Dopamine. This chemical is produced in the part of the brain that is associated with reward. When someone experiences a reward — say while eating a really good meal — their Dopamine (red stuff) level spikes. For addicts, the opposite is true: That spike in Dopamine only comes in anticipation of the reward, as opposed to the actual reward itself. Later, once the reward is gotten, the effects are blunted because the brain has been flooded with dopamine as it thought about eating.

This PET brain scans show chemical differences in the brain between addicts and non-addicts. The normal images in the bottom row come from non-addicts; the abnormal images in the top row come from patients with addiction disorders. These brain scans show that that addicts have fewer than average dopamine receptors in their brains, so that weaker dopamine signals are sent between cells.

This is what sugar does to your brain — the exact same thing smoking, alcohol and cocaine do.

Just how bad is America's addiction to sugar?

The Centers for Disease Control project a double- or triple-fold increase in the proportions of Americans with diabetes by 2050. On the low end, a study published in Population Health Metrics projects 21% of Americans will have diabetes. On the high end ... 33%.

In 2013, student-faculty research at Connecticut College found that in lab rats, Oreos, rich in sugar and fat, may be just as addictive as cocaine. Given the option of Oreos and rice cakes, the test rats spent as much time eating cookies as getting high on cocaine or morphine. Furthermore, the rats given Oreos were subjected to a test that measured expression of a protein called c-Fos, a known marker of neuronal activation in the part of the brain that controls the feeling of pleasure. The result was alarming: Oreos beat out both drugs by a significant margin.

"Our research supports the theory that high-fat/high-sugar foods stimulate the brain in the same way that drugs do," said Joseph Schroeder, director of the college's behavioral neuroscience program. "It may explain why some people can't resist these foods despite the fact that they know they are bad for them."

Student Jamie Honohan, who contributed to the study, added that "Even though we associate significant health hazards in taking drugs like cocaine and morphine, high-fat/ high-sugar foods may present even more of a danger because of their accessibility and affordability."

So basically, Oreos are legal crack. A 2013 profile in the New York Times revealed the massive amount of scientific research big food companies have poured into developing tastier, more addictive products. Even the way they talk about marketing sugar-filled foods can sound an awful lot like discussing business with a drug dealer.

Former Coca-Cola executive and COO Jeffrey Dunn explains the sales logic they'd use: "How many drinkers do I have? And how many drinks do they drink? If you lost one of those heavy users, if somebody just decided to stop drinking Coke, how many drinkers would you have to get, at low velocity, to make up for that heavy user? The answer is a lot. It's more efficient to get my existing users to drink more."

The tipping point, he claimed, was when he began making frequent marketing trips to Brazil and realized, "these people need a lot of things, but they don't need a Coke."

And just like illegal drugs, large amounts of sugar can be very bad for you. In addition to obesity and diabetes, sugar can deeply affect your metabolism, impair brain function and make you more susceptible to heart disease and cancer. It can even form premature wrinkles.

Given all this, it's pretty likely you're over-consuming. Almost 40% of children's diets now come from added sugars and unhealthy fats. To put it in perspective, this infographic from OnlineNursingPrograms.com shows just how much sugar the average American consumes.

Fortunately, there are steps you can take to limit your sugar intake, even if the sheer amount of sugary goods on the market makes the sweet stuff nearly impossible to cut out entirely. Brian Wansink and colleagues at the University of Illinois, Urbana-Champaign found that decreasing visibility and convenience helped participants consume less chocolate. Putting it in a drawer, for example, lowered consumption by a third. And these and other findings linking visibility and low barriers to access have major implications for national policy, like removing candy and junk food machines from school. They may be small steps, but they're something. And if the consumption numbers are any indication that change needs to happen, something's better than nothing.

A new film called Fed Up, produced and narrated by Katie Couric and opening on May 9, hopes to shed some light on the massive junk food industry that's fueling America's obesity crisis.

"There are 600,000 food items in America. 80% of them have added sugar," warns the trailer's Dr. Robert Lustig, the University of California in San Francisco's professor of pediatric medicine. Another warns that ours is the first generation of U.S. children expected to live shorter lives than their parents. By 2050, it warns, a third of us will have diabetes. Check out the trailer here: