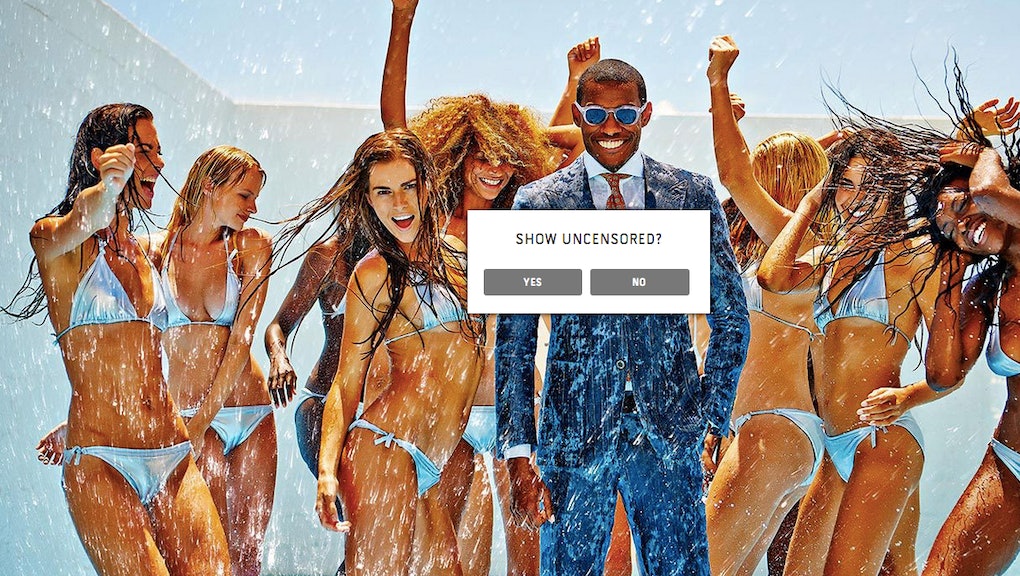 Clothing Company Pulls a Robin Thicke, Serves Up the New Most Sexist Ad on the Internet

You can tell how mediocre a product is by the number of topless women the company thinks is necessary for us to pay attention to it. Suits Supply, a Dutch brand, with stores in the U.S. has taken that rule of thumb to a whole other level — a fully-dressed-if-you're-a-man-and-naked-if-you're-a-lady kind of level.

In a very Blurred Lines-esque marketing ploy, the clothing company is juxtaposing its suits with numerous pairs of women's Bahama Mamas. The result is an ad campaign that only a guy who still idolizes Stifler could appreciate.

The images are advertising by association, an unsubtle persuasion technique that aims to link a product with something desired by the target audience. Suits bring you boobs. Boobs bring you sex. If I wear the suit, the boobs and sex will come to me, right?

In fact, the geniuses who came up with the campaign were so effective in focusing attention on women's milk factories, they seem to have forgotten their job was to sell those pesky suits. Barely any appear in the photos, especially if you click on the "uncensored" version of the campaign.

Actually, I spoke too fast. You can clearly see the bottom half of a suit jacket behind all those erotically Photoshopped water drops. See there? It's right between Lady No. 1's bum and Lady No. 2's boobs. Right where No. 2's hand meets No. 1's behind, a sexualized (and fake) pose that women in magazines can't seem to get enough of!

In another shot, you can clearly see part of a suit sleeve. Can you spot it? Right in front of that young woman's exposed underboob!

Does Suit Supply sell these shirts in male sizes too? Who cares! Wet boobs for everyone!

Judging by these ads, the average man's No. 1 concern when buying a new suit is... sexy lady bodies? It's certainly not a clean cut, a nice pattern, a cool color or a crisp look.

Anyone still not convinced of Suit Supply's strategy, not to mention its fairly low estimation of the male brain, should check out some of the company's previous campaigns. While the suits may change, all of these ads have something in common. Can you guess what it is?

Who knew men could engage in so much sexual activity without ever taking their suits off?

Buying sex may be illegal in this country, but selling it in an ad campaign is still technically kosher. What's especially worrisome is the way exploitative representations of female bodies are often regarded favorably, while women who dare to take agency over their own bodies are met with harsh criticism, especially in television and film.

Additionally troubling is the restrictive hetero-patriarchal conceptions of manhood images like these reinforce. Given that gay men hold so much purchasing power, it's surprising to see ads consistently ignore them as a target market.

The objectification of women's bodies and assumptions of heteronormativity in advertisement aren't new practices, but they're starting to get really old. It's 2014, high time companies realize they can sell products without relying on belittling notions of who we are.

What do you think about the Suit Supply ad campaign? Let me know on Twitter and Facebook.