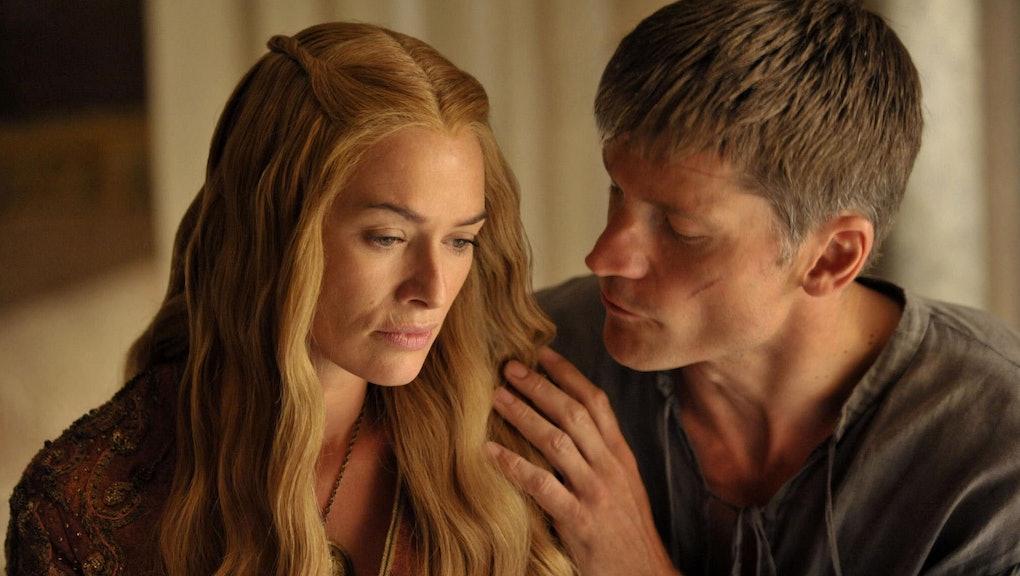 Yes, That 'Game of Thrones' Scene Was Rape, and No, It's Not OK

The ever-controversial Game of Thrones, famous for its often gratuitous nudity and violence, caused a stir Sunday night, when everyone's favorite one-handed Kingslayer Jaime Lannister raped his twin sister/lover/mother of his children next to the body of their dead son.

The scene, which does not go down this way in George R. R. Martin's original books, is supremely disturbing all on its own, but the episode's director, Alex Graves, made things even worse by stating that it was not rape. Graves said in interview with Alan Sepinwall that although Cersei Lannister spends literally the entire scene resisting her brother, the sex "becomes consensual by the end because anything for them ultimately results in a turn-on, especially a power struggle." In other words, Graves thinks pinning a woman down and having sex with her as she kicks, claws and repeatedly, unequivocally says "no" is not rape.

Are you kidding me? You don't just get to force someone to have sex with you until they get so "turned on" that they relent and then call it consensual. Besides, the victim knew the perpetrator, had previous relationship with him and did not scream. This is literally the most common type of rape.

Sepinwall's response is, unfortunately, no better: "Jaime, in turn, seizes the moment to finally perform the act he's been denied of since the war with the North began, even if he has to get very rough at first to get what he wants."

This is some disrespectful, dangerously oblivious rationale. Many survivors blame themselves for their rapes specifically because they feel they did not fight back enough, and this guy has the nerve to say that a woman who is explicitly telling a man no is actually totally into it? Yes, it's just a show, but the thought (or apparent lack thereof) behind this scene is part and parcel with a culture that so often assumes victim secretly "wanted" or were "asking for" their assaults.

Beyond Graves' wildly insensitive comments, we need to question why he felt it necessary to alter this scene in the first place. It's not that you can never show rape on TV, but it's a topic that should serve an actual point if you're going to justify including it. So often violence against women is tossed on screen as a lazy plot device to spur revenge or make a character more or less sympathetic, while glossing over the very real, long-lasting consequences it can have for survivors (as was seen with the rape of Anna Bates on the most recent season of Downton Abbey).

Jaime and Cersei have rough sex at this point in the books, but there it is clearly consensual. Martin said in response to the episode that in the books, Cersei "is as hungry for Jaime as he is for her. The whole dynamic is different in the show ..."

Graves' directorial decision completely changes the meaning of the scene. As Slate’s Amanda Marcotte writes, "On the page, it serves as a reminder that this ugly, incestuous relationship is a coping mechanism for two very badly damaged people. Turning it into a rape just turns Jaime into a monster, the kind that would rape a woman he claims to love in front of her dead son to punish her for being 'hateful.'"

The entirety of last season was basically spent redeeming Jaime for the audience — which is easier said than done, given that this is the man who nonchalantly pushed a little boy out a window during the first episode of the show. Why waste that time only to decimate his character all over again?

Given that Graves doesn't even realize that he filmed a rape scene at all, it's likely he amped up the added the sexual violence for its "entertainment" value. Because apparently there's nothing like a little rape to spice up the Sunday night lineup.