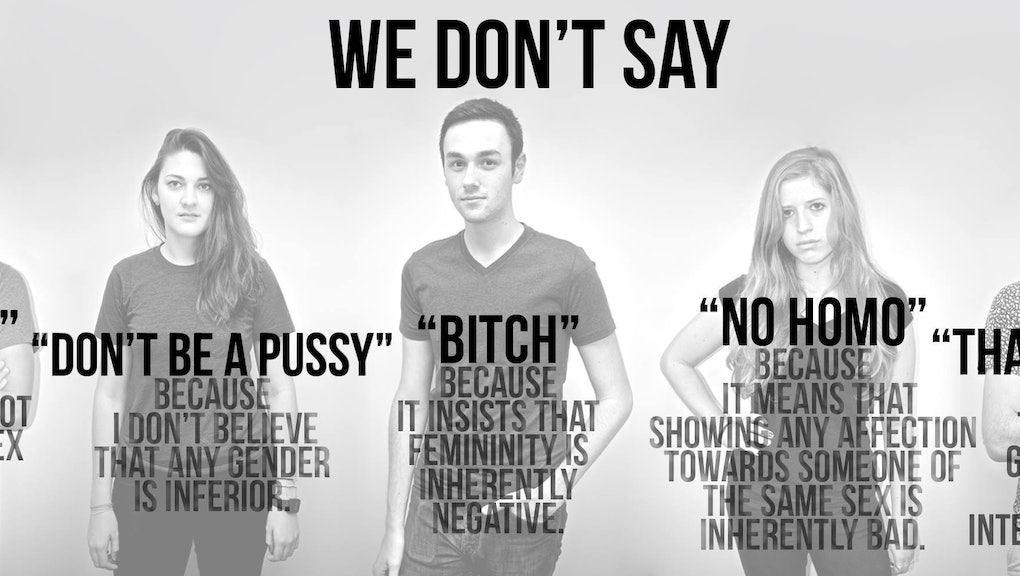 The normalization of homophobic and misogynistic language, especially among young people, is nothing new. But while there may be a growing awareness of the problem, there haven't been many organized initiatives dedicated to eradicate these types of problematic expressions — until now. Enter Duke University's campaign "You Don't Say," which is an effort to remind students that language is powerful and that word choice has consequences.

The Duke project uses photos to show how casual slurs like "no homo," "tranny," "that's so gay" and "you're such a pussy" target women and the LGBT community. In the series, Blue Devils students explain why they have adjusted their language.

Put together by Blue Devils United, Duke's LGBTQ students' group, and Think Before You Talk, an initiative to raise awareness about how language marginalizes minorities, the campaign's aim is to encourage an open dialogue about pejoratives and cultural mores.

Abhi Sanka, who participated in the campaign with a banner that says, "I don't say no homo because it delegitimizes love and sexual identities," explained why he joined the project on Facebook. "This campaign strives first to instill understanding of how words can make a difference in shaping identities," Sanka said.

Fiona McCrossin, from Duke's Class of 2016, feels that saying "tranny" is unacceptable. "Discriminatory and dehumanizing language is reflective of a culture that supports those practices, and if we hear language that targets a part of our own identities in a negative way, it is likely that society as a whole will treat us negatively," she said.

This is not the first time Duke students have taken a stand. In 2012, the "You Can Play" campaign promoted tolerance with its message of support for LGBT athletes.