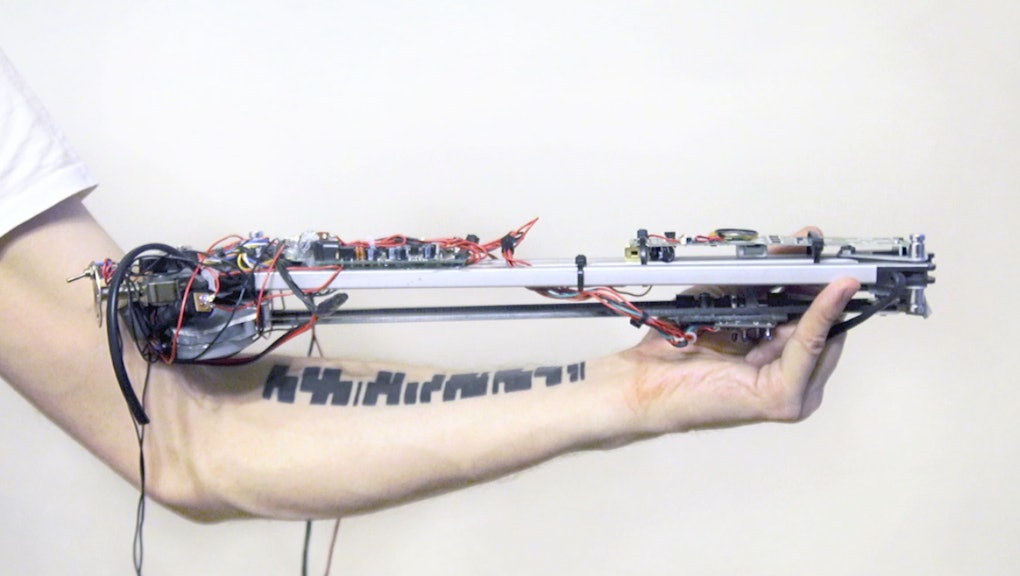 Thanks to a DIY Scientist, Tattoos Will Soon Play Music

Dmitry Morozov has a big tattoo on his forearm. To the lay person, it looks like a series of black bars of different sizes. But media-artist and research scientist Morozov has a deeper meaning: His tattoo, paired with a mechanical arm, is actually a musical instrument.

Morozov is using the tattoo as part of a performance called "Reading My Body." He's tattooed a sequence of black lines on his forearm and built a motorized sensor that can be hooked up to a computer to create an almost infinite variety of sound. The sensor is incredible: Using a Wii remote (to sense arm motion), black line sensors (to read the tattoo), a stepper motor (to power the sensor's trip along the tattoo) and an Arduino Nano (to link to the computer), Morozov has built a second arm that turns his tattoo and movement into sound. The device can produce anything from light piano taps to screeching synths. He seems to be using it mostly for bizarre rumbling noise, but we're sure it's a few Wii remotes away from writing the next EDM sensation.

In a recent interview with Noisey, Morozov said that it took him only two days to create this device, alluding to a bigger plan of exploring sonification and the body. Through the project, the human body and the tattoos on it become an instrument capable of a seemingly infinite number of individual sounds.

Morozov's tattoo project is proof of his faith that everything can be turned into music. He has created dozens of incredible audiovisual installations and instruments, using everything from seashells to solar panels. But "Reading My Body" is his best work yet because it perfectly understands what tattoos are all about.

Tattooings' origins are as mysterious as cave paintings, but in every era they've been some of our greatest tools for self-expression. This is a huge, interactive next step in their evolution — something that makes ink come alive in a whole new way.