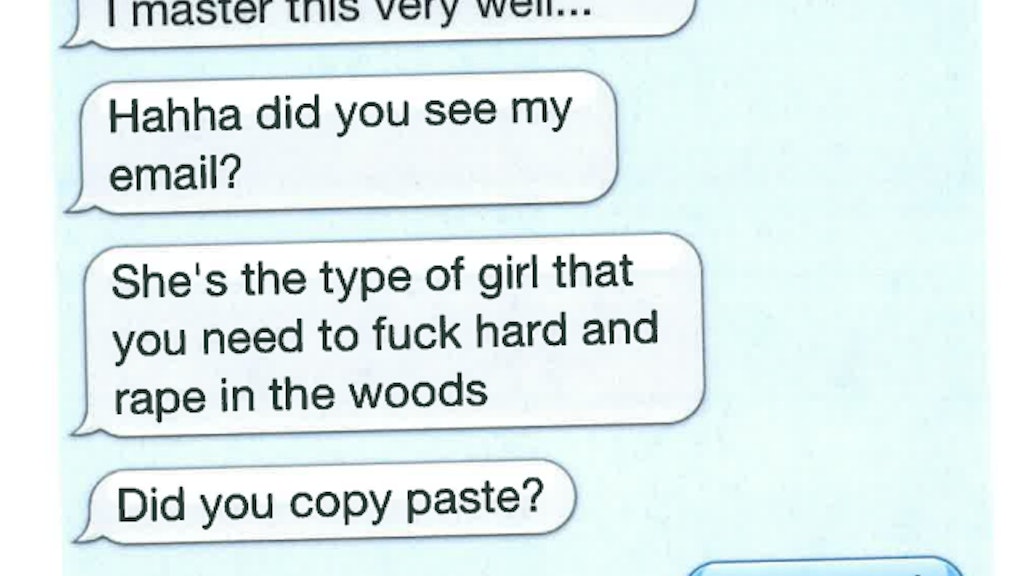 Wouldn't it be fun to know what men in fraternities talk about when the women aren't around? Thanks to 70 pages of horrifying leaked emails from a "secret fraternity" called Epsilon Iota at American University, we don't have to imagine what that's like. We can see it unfold before our eyes.

Brilliant reporting by Erin Gloria Ryan at Jezebel lets us in on this secret fraternity, the members of which almost exclusively refer to women as "[insert adjective] bitches." They still use the word "faggot" profusely and refer to non-consensual sexual activity as a way to get even with "bitches." The frat bros also consistently use the term "plowing" as a distorted synonym for sex, implying that intercourse with a woman can only be done aggressively and domineeringly.

In these internal communications, sex and rape are almost indistinguishable.

In one email from March, the fraternity members discuss ways of getting girls at their pre-parties to "feel more relaxed and safe" so that the "bitch [is] into the right state of intoxication so that plows will be raining all over the place."

Another email chain outlines the murky details of a sexual assault incident where the alleged victim is called a "lying cunt." Another man comments on how rape is how "dumb bitches" eventually learn "their place."

Flipping through these correspondences in their entirety is a crude reminder of the ubiquity of toxic masculinity in fraternities where the dehumanization of women is not only accepted — it's encouraged.

Even when allegations surface about a physical assault against female students, the fraternity members' biggest concern was their reputation so that women (seen as purely transactional) would still come to their rapey parties. "Something needs to be done so bitches will still go to our parties," one fraternity brother writes.

Here's how one guy responds:

Ironically, one of the members responsible for some of the most degrading comments towards women, like saying he conquered a "bitch" just "like France in Africa," uses an automatic signature that reads "love and respect," suggesting that such concepts only extend to half the population.

In another email, members are throwing around T-shirt ideas that are all more preposterous than the other.

According to the Fratergrate Tumblr, Epsilon Iota's fraternity privileges were revoked in 2001, which means the institution is more of an "underground frat" that has continued to operate unofficially. It hasn't been recognized by school authorities for more than 10 years, which as Erin Gloria Ryan puts it, makes them a "freelance club of douchebags pretending to be a fraternity that has operated unchecked like a raging herpes outbreak on AU's upper lip for more than a decade." They might not have formal recognition from the university but they still have a listserv, EI letters, have a frat house and parties.

That a secret fraternity is a breeding ground for rape culture is worrisome, but that it's happening right in our nation's capital makes that even harder to stomach. According to Erin Gloria Ryan's research, one of the men in this email chain now works for a "prominent congressman." Judging by how much rape culture permeates the political scene in the U.S., with influential politicians saying things like, "Rape is kinda like the weather. If it's inevitable, just relax and enjoy it," or that certain forms of sexual assault should be legal, it's no surprise many women still feel like DC will never stop being an old boys club. Of course not all men (or fraternities) promote rape, but it's troubling to see so many that do.

Thankfully, anti-rape activists aren't standing for this. American University President Neil Kerwin has launched a full-blown investigation and issued a statement explaining that the leaked communications "cannot be viewed as an isolated set of circumstances," and that they rather raise "broader concerns about student conduct and high risk and harmful behaviors." A change.org petition organized by students is also demanding that the underground fraternity be expelled. Another campaign is requesting that the school hire full-time survivor advocates to help students come forward with sexual assault.

It's worth noting that only a small portion of the frat's communications were leaked, which suggests that there's more disgusting information where that came from. It won't be surprising if the investigation uncovers more troubling facts about Epsilon Iota.

With the announcement of the investigation coming on the heels of the Steubenville coach getting a painfully small sentence of 10 days for trying to protect the identity of rapists, all eyes will be on American University. Let's hope no victims fell prey to the members of Epsilon Iota, although these leaked emails suggest that this may be wishful thinking.