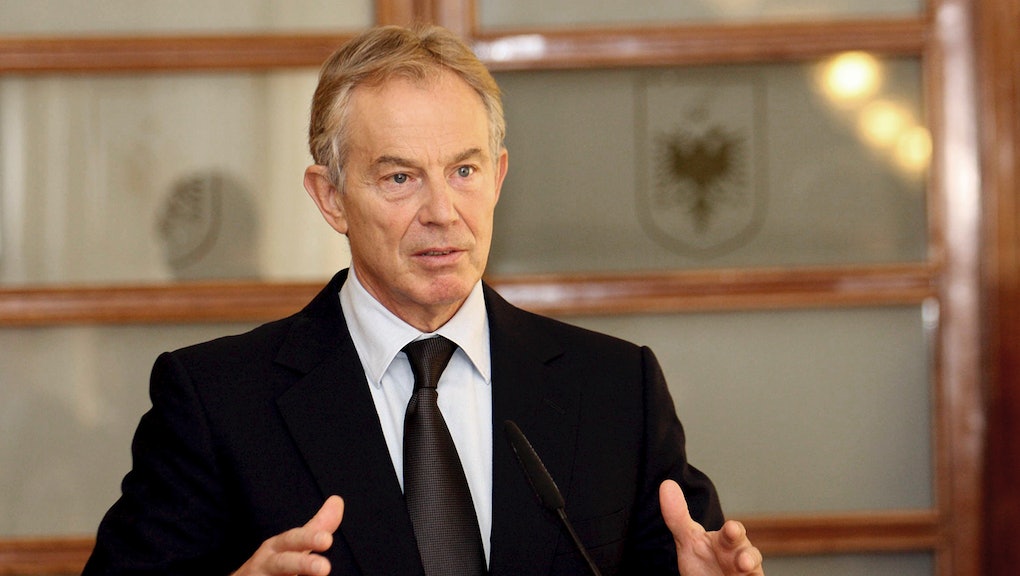 Former UK prime minister and crusader against the "Axis of Evil" Tony Blair delivered a speech Wednesday calling for Western powers to "take sides" in Middle East foreign policy and to move the issue of "religious extremism" to the top of their agenda.

Now, a tongue-in-cheek petition is circulating pleading with the U.S., EU, UN and Russia to make Blair shut up. Another more widely shared petition, personally addressed to Blair, is demanding that he "never speak or write in public ever again about anything."

While Blair's speech is not a huge departure from statements he's made since Sept. 11, 2001, and the 2003 invasion of Iraq, perhaps the public expects his hindsight to be a little closer to 20/20.

Viewers jumped on Blair's recommendations for engagement with the region, which glossed over complex geopolitical realities and the relationship between past Western interventionism and violent religious ideology.

At once Blair called for Western powers to support Egyptian presidential candidate Abdel Fattah El-Sisi in Egypt (whose government is accused of massacring Muslim Brotherhood opposition) and to revisit agreements with close Sisi and British ally Saudi Arabia. Blair also lamented the choice not to intervene in Syria, a decision greatly influenced by the legacy of the U.S. and UK-led Iraq invasion, which was based on false intelligence, killed hundreds of thousands of Iraqis and left the country in shambles.

Blair also stated he believes China and Russia share interests with the West in regards to regional diplomacy and defeating "religious extremism," an odd statement, considering Russia's role in protecting Syrian President Bashar al-Assad's regime, and a poorly-timed one, given the current crisis in Ukraine.

Blair's address was heavy on rhetoric against "religious extremism," but falsely equated diverse strands of Islamism. At one point, in the same thought, Blair both acknowledged the need to distinguish between political Islam and extremism and continued on to say that "[political Islamists'] overall ideology is one which inevitably creates the soil in which such extremism can take root."

No mention of how draw-outs of foreign troops after years of occupation and war may breed resentment and extremism, something with which he's had firsthand experience.

His speech is yet another sign that it might be time for the former Prime Minister to to a little less talking, and a little more learning from his past experiences.