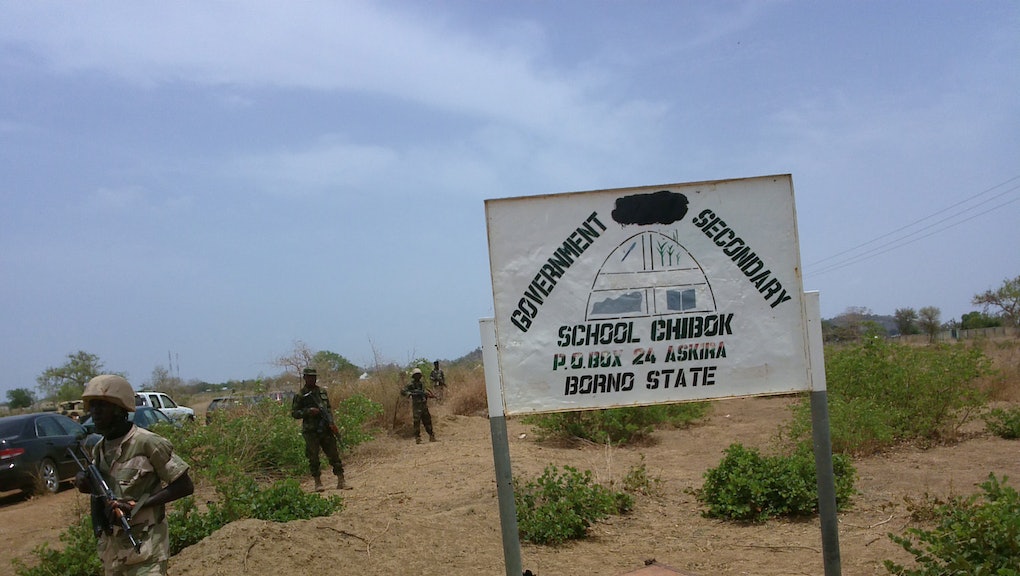 234 Female Students Went Missing in Nigeria, and the Media Has Barely Covered It

The news: South Korea's tragic ferry disaster has gripped international headlines for the past week as the world watched with bated breath to find out what happened. Though 159 bodies have been discovered by divers, another 143 still remain missing — and families and loved ones are hoping against hope that they are somehow still alive.

But on the other side of the world, 234 schoolgirls in Nigeria, ages 16 to 18, were abducted two days before the South Korean incident. Armed men broke into a school in the northeastern city of Chibok, shot the guards and took the girls away while they were taking a physics exam. The attack has been linked to Boko Haram, a jihadist affiliate of al-Qaida.

So why haven't we heard about it? Simply put, because the world has very different views on South Korea and Nigeria. One is among the richest countries in the world and a powerful Western ally with a high quality of life and strong international presence. The other is in Africa, where, you know, these things happen all the time — or so we're led to believe.

"In Nigeria, the mass abduction of schoolgirls isn't shocking," CNN claims. "No one knows where the missing girls are. And even more surprising, no one's particularly shocked."

But that's not true. Boko Haram, which is Hausa for "Western education is sinful," is against the education of girls. Girls have been abducted in the past to serve as cooks or sex slaves — but a kidnapping of this size is unprecedented.

And despite what CNN might think, people aren't simply giving up on the girls. Desperate family members and town residents have gone on the search, combing the Sambisa Forest, a known terrorist hangout, on motorcycles. The search parties have so far had some success, uncovering traces of the girls.

The government is not helping. According to the school, about 43 girls have already escaped their captors — no thanks to the authorities. "None of these girls were rescued by the military; they managed to escape on their own from their abductors," said schoolmaster Asabe Kwambura.

As recently as Monday, education authorities claimed that only 85 girls have gone missing, despite the families' insistence that 234 were taken. The military even claimed at one point that they rescued all but eight girls — which they immediately retracted the following day.

Nigerian security officials insist they are in "hot pursuit" of the abductors, but they've yet to find a single girl. "It's alarming that more than a week after these girls were abducted, there are not any concrete steps to get them back," said Human Rights Watch's Nigeria researcher Mausi Segun.

It's a dangerous environment. Boko Haram has been on a rampage in recent months and on the same day as the girls' abduction, the group claimed responsibility for a bombing in Abuja that killed 75. The terrorist group, which wants to establish an extremist Islamist state in northeastern Nigeria, has already killed over 1,500 people this year.

But that does not mean we should look the other way when a tragedy like this takes place.

"The South Korean story has unfolded on camera, in a first-world country with every facility for news reporting. In contrast, the young Nigerians have vanished into the darkness of a dangerous world," Ann Perkins writes in the Guardian. "Nigeria is complex and messy and unfamiliar. It is easy to feel that what happens there is not real in the way that what happens on camera in South Korea is real."

The ugly truth is that when young lives are similarly at stake, we are more shocked when the danger takes place in a country that is considered stable and affluent — and less so in a country where violent insurgents are trying to take over.

But the media has a responsibility to report the truth rather than ignoring a story because it sounds familiar. It's easy to become desensitized to stories coming out of a conflict-ridden region, but that doesn't mean these human lives are worth any less.