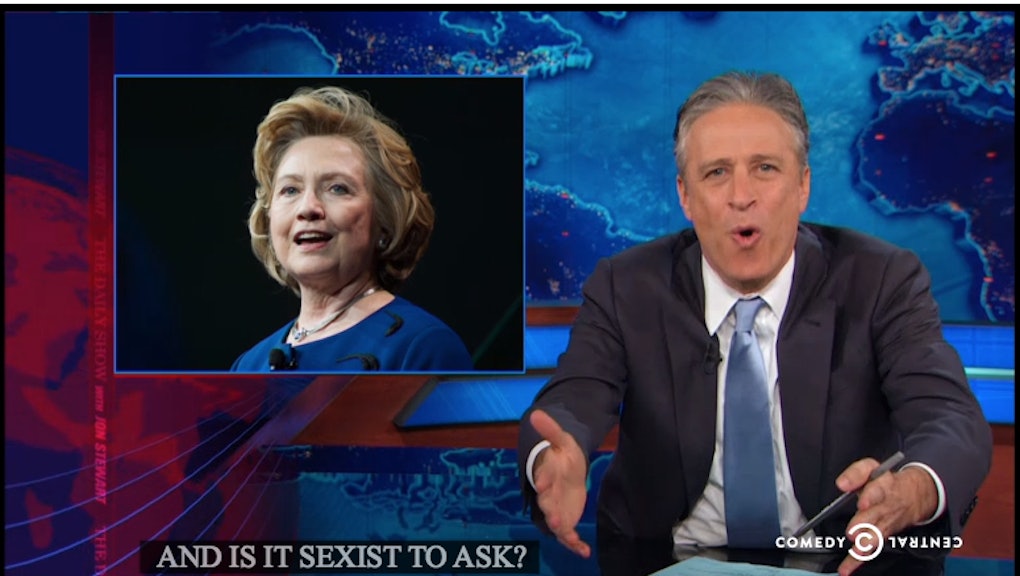 Someone wondering if it's sexist to talk about whether becoming a grandmother will affect Hillary Clinton's presidential run is like someone pondering whether the sun rises in the morning? Or whether Beyonce woke up like this? It's a forgone conclusion. Obviously, of course, definitely yes — I mean are you kidding me?

And yet, it only took a few hours after Chelsea Clinton announced her pregnancy last week for the preprosterous media speculation to begin. Politico's headline advised, "What to expect when she's expecting," and Charlie Rose asked, "president or grandmother?" as if a woman couldn't possibly be both.

This type of coverage is rather in-your-face evidence of a culture that consistently judges women more harshly and by different standards than men. The first woman to potentially become leader of the free world is still being reduced to gender stereotypes. How tragically ironic.

The sexism, in this case, is inherent. We checked history and a similar question has never been asked about a male candidate. Like, ever.

As Ari Melber pointed out during the Last Word on Tuesday night, Clinton is not the first potential candidate to be a grandparent, but she's certainly the first to have potential grandchildren raise doubts about her ability to lead. Former President George H. W. Bush had 10 grandchildren when he ran; Joe Biden had five. And let's not forget Mitt Romney, who campaigned with a whopping 18, or as Jon Stewart put it during his show Tuesday, a "whole petting zoo." Where were the emotionally charged headlines when these graying statesmen declared their candidacy?

But let's put aside the sexism for a second. The idea that being a grandparent, a.k.a spoiling your grandchildren, can take away from your full-time job is utterly ludicrous. And what evidence could the media possibly present that could prove HRC's grandchildren were detracting from her presidential abilities? Clinton walking out of a Toys "R" Us with way too many shopping bags? Pictures of her pinching her grandchild's cheeks for an extended period of time? I can smell the Onion headlines from a mile away.

Jon Stewart is not one to fall for these kind of cheap political tricks. During a masterful recent segment addressing sexism in the political arena, Stewart brilliantly pokes fun at such flawed logic, referencing similar instances where women have been deemed unfit for political office, such as Sen. Dianne Feinstein and New Jersey Governor Chris Christie's former Deputy Chief of Staff Bridget Kelly, both being discredited for being "too emotional."

Clearly we still have a long road ahead of us if we want to eradicate sexism in politics. Just as clear is the sad reality that Hillary Clinton will be the target of more gendered attacks in the future, especially as her possible presidential ambitions become more tangible. That doesn't mean we can't be smarter than the media, however. Let's judge female politicians on their savoir faire, not their conformity to stereotypical expectations. We all benefit from leaders who can get the job done, so don't let the media cloud your judgement when making the right choice.