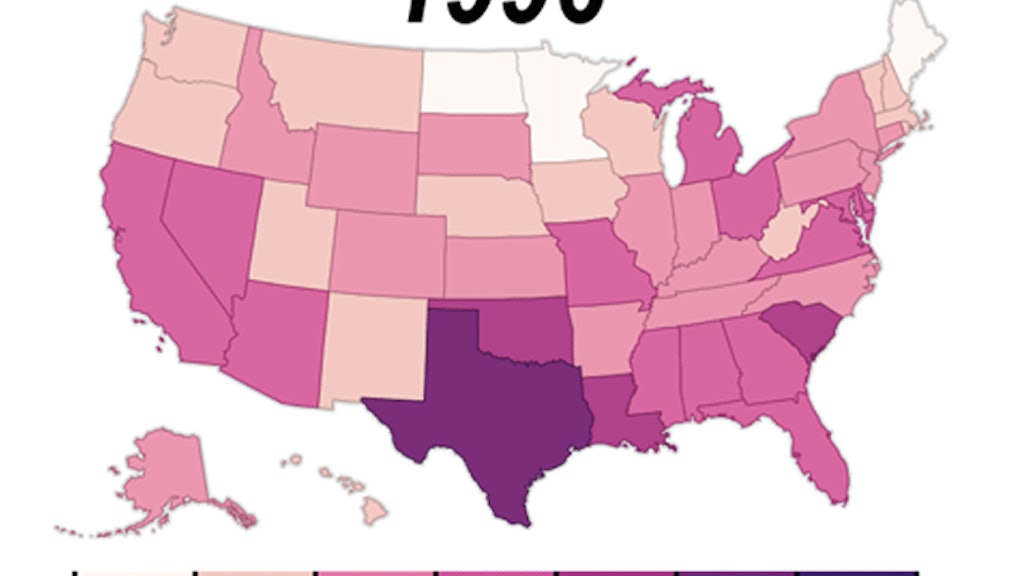 The United States has the highest incarceration rate in the world, with 5% of the world's population but around 25% of its prisoners. As the above GIF demonstrates, it's a national problem that's developed over a significant amount of time — but it's gotten far worse since the beginning of the 1990s, particularly in the South and Southwest.

As the Population Reference Bureau notes (although their numbers appear to underestimate the prison population compared to other sources), these staggering federal numbers mask even higher rates by state and region. The South, for example, had at least 10% higher regional rate by their data in 2010, while the Northeast came in at 59.6%. Louisiana, for example, is the world's prison capital. As the Times-Picayune observed in 2012, a staggering 1 in 86 Louisiana men is serving hard time:

Louisiana is the world's prison capital. The state imprisons more of its people, per head, than any of its U.S. counterparts. First among Americans means first in the world. Louisiana's incarceration rate is nearly five times Iran's, 13 times China's and 20 times Germany's.

Driving this system in Louisiana is a $182 million private prison industry where each prisoner is worth $24.39 a day. This infographic by the paper puts it in even starker comparison:

As the Economist noted in 2013, that year's Department of Justice operations review noted two simultaneous crises developing in the U.S. prison system:

The Department of Justice (Department) is facing two interrelated crises in the federal prison system. The first is the continually increasing cost of incarceration, which, due to the current budget environment, is already having an impact on the Department’s other law enforcement priorities. The second is the safety and security of the federal prison system, which has been overcrowded for years and, absent significant action, will face even greater overcrowding in the years ahead.

In other words, the DOJ is locking up so many people it can no longer do it safely, which is negatively impacting the agency's ability to actually look for and prosecute criminals outside prison walls. And if the feds can't keep up, God only knows how big the looming catastrophe in the states must be.