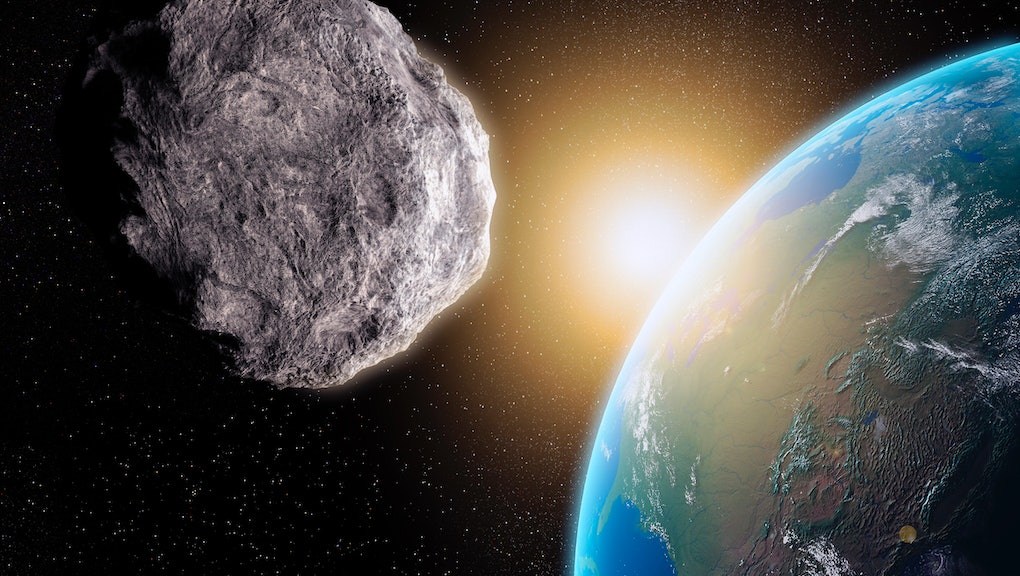 What's the Chance Earth Gets Struck By an Asteroid in Our Lifetime?

Though we have grown accustomed to apocalyptic asteroid events thanks to Hollywood blockbusters like Armageddon and Deep Impact, a space advocacy group says the big-screen threat is more real than you might think.

According to the B612 Foundation, an asteroid defense group founded by former NASA astronauts, space rocks with the ability to wipe out an entire city can occur as frequently as once every 100 years — as opposed to once every 3,000 years, as conservative estimates suggest.

"There are people who say, 'Oh, once every million years we have something we have to worry about.' That couldn't be more wrong," said physicist and former astronaut Ed Lu, now the chief executive officer of the B612 Foundation. "Eventually you're going to get hit because it's just a matter of time."

How did they arrive at the number? The group extrapolated from data gathered by the Comprehensive Nuclear-Test-Ban Treaty Organization (CTBTO), which operates a network of infrasound sensors that can detect secret atomic bomb detonations. Between 2000 and 2013, CTBTO catalogued 26 major explosions, none of which were man-made — they all resulted from asteroid strikes.

Now, it's important to keep in mind that almost all the asteroids were harmless. Most of them burned up in the atmosphere before they ever made contact with Earth, and those that did make it through intact ended up falling into the ocean. Only one was major enough to make the news: the 20-meter meteor that fell in Chelyabinsk, Russia last year.

But the concerning thing is that only one of these 26 meteors was actually detected in advance, and it was only hours before it entered the atmosphere. Given how the energy from these explosions ranged from one to 600 kilotons — the bomb that destroyed Hiroshima was a 15-kiloton device — it's not a good sign that authorities missed all these meteors.

But how does that translate to actual danger? While the meteors that have been recorded since 2000 may not have posed actual danger on their own, B612 believes that they may be a sign of bigger problems to come.

"This is a bit like earthquakes," Lu explained. "In the cities that have a major danger — Tokyo, Los Angeles, San Francisco — they know the odds of big earthquakes by observing how many small earthquakes there are. Because there's a known distribution of earthquakes, meaning that earthquakes come in all sizes, small to large — if I can measure the small ones, I know how many big ones they're going to be. And you can do this with asteroids."

Even if that's true, what can we do? B612 is raising money to build the Sentinel space telescope, which it hopes to launch by 2018. The telescope will be positioned near Venus, 170 million miles from Earth. The $250 million device is expected to detect 98% of near-Earth asteroids; currently, we can only see 1% of them because they are hidden in the glare of the sun.

The foundation believes that if we don't proactively seek out potential threats, we would be leaving everything up to chance.

"Because we don't know where or when the next major impact will occur, the only thing preventing a catastrophe from a 'city-killer' sized asteroid has been blind luck," Lu said.