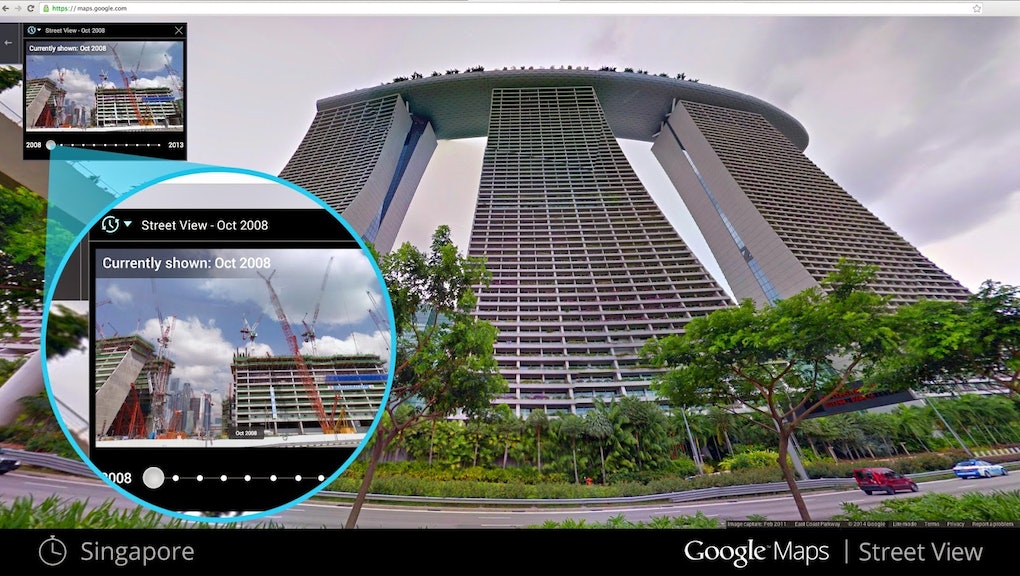 Google's New Feature Lets You Time Travel Into the Past

A new addition to Google's Street View product, which launched in 2007, allows you to look back in time and see how any given street's surroundings have changed since the implementation of the project. And the results can be pretty eye-opening, showing everything from gentrification to the impact of natural disasters.

Writes Google on its official blog:

If you've ever dreamt of being a time traveler like Doc Brown, now's your chance. Starting today, you can travel to the past to see how a place has changed over the years by exploring Street View imagery in Google Maps for desktop. We've gathered historical imagery from past Street View collections dating back to 2007 to create this digital time capsule of the world.

The search giant gave these examples of how the new feature works, showing the construction of the Marina Bay Sands resort in Singapore, the slow ascent of Freedom Tower in New York City and the devastation in Onagawa, Japan after the 2011 earthquake and tsunami that dealt severe damage to the region and caused Level 7 meltdowns at the Fukushima nuclear reactor.

"Our original goal with Street View was to build a map that is useful, accurate and comprehensive," Vinay Shet, a Google product manager, told TIME. "So we've been capturing all these snapshots, and we thought, let's use all this data and create something that users will love, that will be exploratory, and hopefully will be useful."

Google provided some extra .GIFs showing just how amazing the feature could be. Below are some of the images:

Google previously provided a limited version of this kind of product in their "Memories for the Future" project covering areas in Japan affected by the 2011 earthquake and tsunami, but this week's massive rollout expands the scope to the entirety of archived Street View data. If the street is no longer there or has moved, Google displays images corresponding to current GPS data. That means, say, roads that have shifted three meters after the Japanese disaster will now be shown at their current location, and is intended as a feature rather than a bug.

The project currently covers under a decade of transformation as captured by Google vans. Imagine how much will have changed in another decade ... a century ... hell, a millennium. Generously assuming someone keeps up the project, archives its data or comes up with an even more impressive successor, imagining the past may be history. Future generations will be able to just type in a time and place and take a look for themselves.

And it's yet another reminder that for better or for worse, Google is the gatekeeper to all this incredible data.