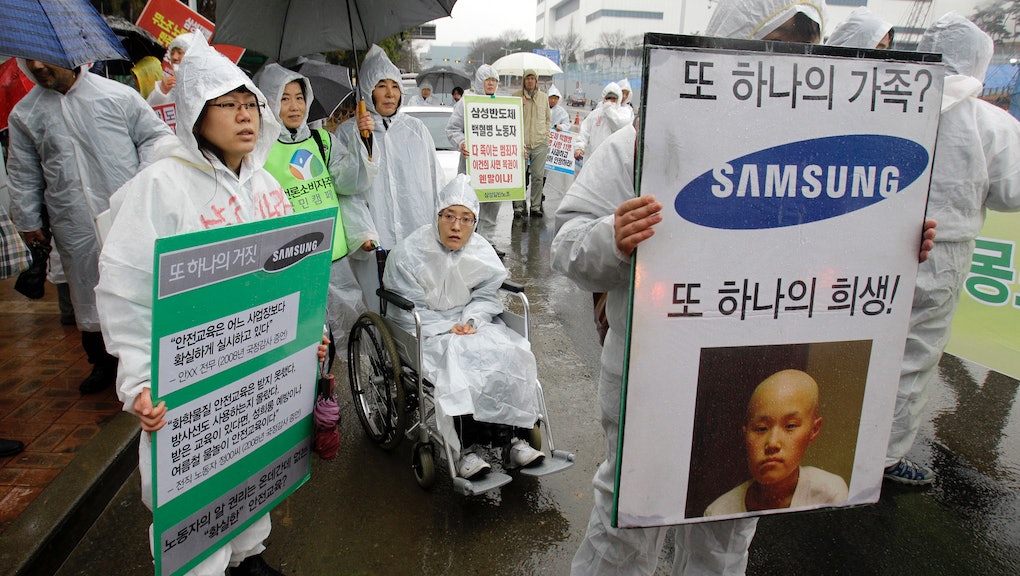 In the United States, it's Relay for Life season at universities and high schools. Students and families gather funds and march at day-long "relay" events to raise awareness about cancer. Thanks to ubiquitous smart phones, Facebook feeds are filled with selfies of well-meaning students raising money for cancer awareness.

But it looks like the processor chips for these phones come at a steep price for factory workers in South Korea, who say that their working conditions cause cancer.

Along with advocacy groups, the workers are demanding that companies like Samsung and Apple address dangerous plant conditions they claim are causing workers to develop deadly blood cancers, occupational leukemia and non-Hodgkins lymphoma.

So far, there have been more than 100 cases of workers developing these cancers during or after their time at the plants.

The problems seem to be arising on semiconductor production lines, where workers sterilize materials for smart phones and LCD screens with a mixture of dangerous chemicals. Workers come in close, repeated contact with benzene and trichloroethylene, known to cause the types of blood cancers popping up at the plants.

Researchers have attempted to investigate the link between these chemicals and workers’ health, but say more access to the factories is needed to prove formal causation between working conditions and cancer.

The stall in research doesn't keep these illnesses from the forefront of South Korean public debate.

Two films were released this spring detailing the epidemic. One of the two immortalized the death of young worker Hwang Yu-mi, who died at 22. The other, The Empire of Shame, is a documentary about the rising cases of illness in the factories.

A representative of parliament is also planning to introduce a bill that would urge Samsung to remunerate and make apologies to affected workers and their families. Samsung representatives have said they have seen the proposed bill and will release a statement on the illness and deaths of factory workers.

At the same time, the company is joining the government to fight workers seeking compensation in court. The case was initially filed on behalf of 50 factory workers in 2007 and has ping-ponged around the courts and appeals process.

On May 15, the appeal goes to the country’s High Court. Samsung has signed on as a reference for the defense.