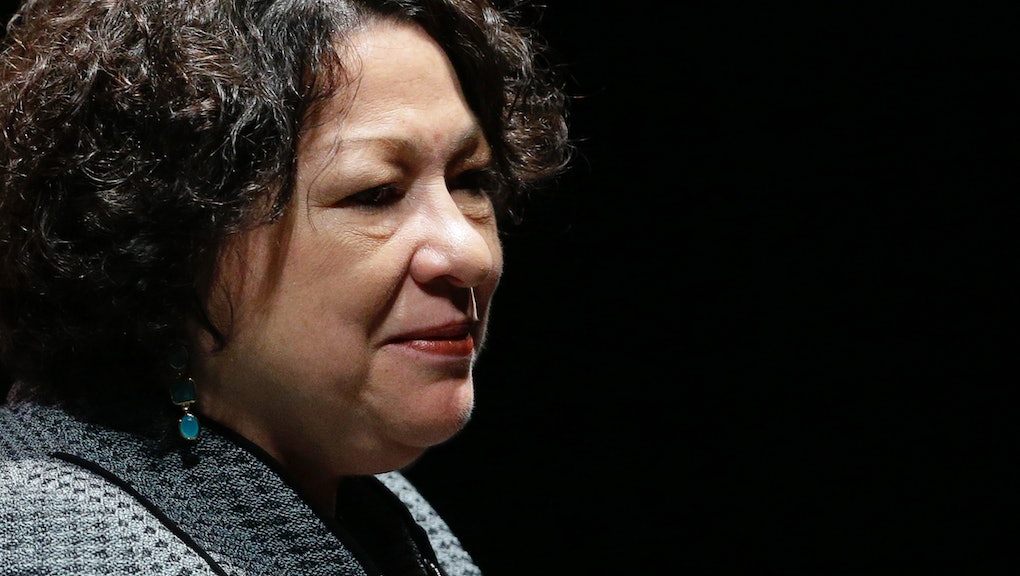 This week, Justice Sonia Sotomayor delivered a blistering dissent that rocked the Supreme Court. While striking in its assertive language, it's not unusual for dissenting opinions to get a little salty. This fact was lost, however, on critics, who, in a dispiriting show of both racism and sexism, proceeded to lambast Sotomayor with pejorative language proving that even the most important legal minds in the nation aren't immune from sexist attacks.

The controversy began on Tuesday, when in Schuette v. Coalition to Defend Affirmative Action, the Supreme Court upheld Michigan's ban on affirmative action, 6-2.

The decision, which will allow the state to continue prohibiting "the use of race-based preferences as part of the admissions process for state universities," was decided over the very strong objections of Justice Sonia Sotomayor. In her searing, 58-page dissenting opinion, Sotomayor, writing on behalf of herself and Justice Ruth Bader Ginsburg, noted that the court was making a big mistake.

"A majority of the Michigan electorate changed the basic rules of the political process in that State in a manner that uniquely disadvantaged racial minorities," she wrote.

Breaking court tradition, Sotomayor read a substantial part of the dissent from the bench. The consequence of the court's decision, she observes, is to perpetuate the insipid yet terribly dangerous idea of "color blindness."

In my colleagues' view, examining the racial impact of legislation only perpetuates racial discrimination. This refusal to accept the stark reality that race matters is regrettable. The way to stop discrimination on the basis of race is to speak openly and candidly on the subject of race, and to apply the Constitution with eyes open to the unfortunate effects of centuries of racial discrimination. As members of the judiciary tasked with intervening to carry out the guarantee of equal protection, we ought not sit back and wish away, rather than confront, the racial inequality that exists in our society.

The blacklash was swift — and it was unpleasant.

An editorial in the National Review — where no one apparently wanted to attach their name to the piece — mocked Sotomayor's "wise Latina" reputation and called her "illiterate."

"Her opinion is legally illiterate and logically indefensible," the editorial reads. "And the still-young career of this self-described 'wise Latina' on the Supreme Court already offers a case study in the moral and legal corrosion that inevitably results from elevating ethnic-identity politics over the law."

Other critics — read: white men — called Sotomayor "overheated" and fueled by "emotion" — coded language that has been used in the past to discredit or marginalize women and minorities.

Appearing on a Fox News panel with conservative columnist Charles Krauthammer, Steve Hayes agreed. "This was a decision written by somebody who was writing about emotion," Hayes said. "It was President Obama's 'empathy standard' — that's what he was looking for when he nominated her; that's what I think he got."

These types of comments may remind some of the criticisms leveled at Dianne Feinstein, chair of the Senate Select Committee on Intelligence, who was recently accused by a colleague of being too emotional to do her job.

For powerful women, it seems these kinds of gendered attacks are still par for the course — but that doesn't make them less shameful. After Senate Republicans earlier this month blocked the Paycheck Fairness Act, a bill that would have worked to end wage discrimination, Sen. Barbara Mikulski (D-Md.) fired back in her own impassioned "dissent."

"It brings tears to my eyes to know how women every single day are working so hard and are getting paid less. It makes me emotional to hear that. Then, when I hear all of these phony reasons — some are mean and some are meaningless — I do get emotional. I get angry, I get outraged, I get volcanic."

The critics who took aim at Sotomayor sought to invalidate her dissent by marking her as uneducated, ignorant and hysterical through the use of insulting tropes. No matter your opinion on the idea of "post-racial" discourse in America, it's clear that we have not addressed our lingering racial inequalities as we live in a society where one of the most influential jurists in the nation is still subjected to racism and sexism.