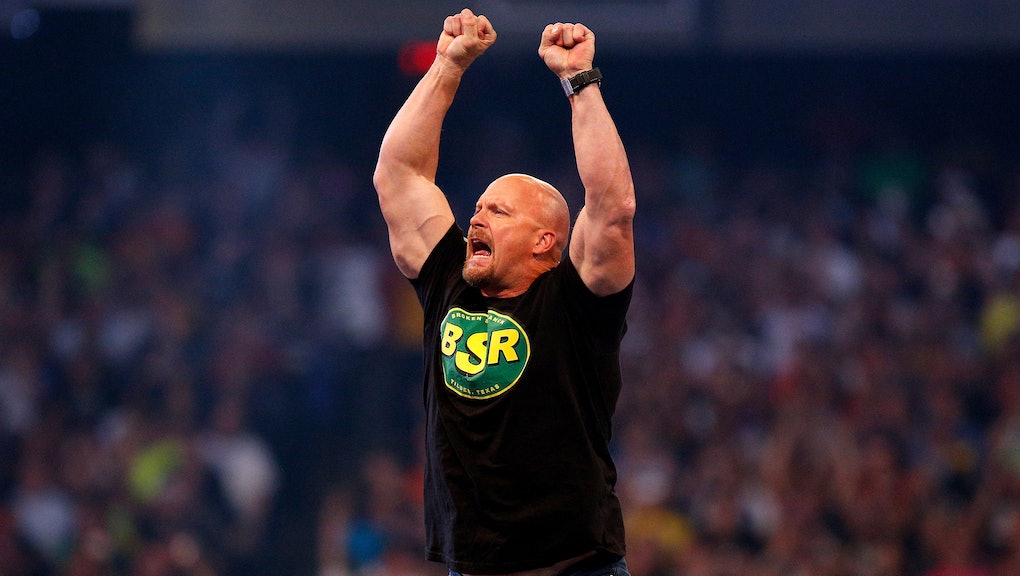 In a wonderfully expletive-laden, recently unearthed commentary, WWE wrestling legend Stone Cold Steve Austin voiced his unwavering support for gay marriage: "I have some damned good friends who are gay, and I'm absolutely for same-sex marriage. I don't give a shit."

The pro-gay sentiments, first made during the star's podcast several months ago, leave little doubt about the wrestler's stance on homosexuality.

Interestingly, this statement is in vivid contrast to the stereotype that the wrestling world, its inhabitants and spectators, are socially conservative. In fact, the WWE has made recent strides in an effort to reach out to and engage with the LGBT community as an ally. Just this month the organization announced a partnership with the NOH8 campaign to support LGBT equality through a series of photos shared widely across social media using the hashtag #WWENO8.

WWE wrestler Darren Young was met with support after coming out last August. Wrestling superstar John Cena, who has a gay brother, appeared on Bravo's Watch What Happens Live to voice his public support for Young, as well as for any other colleagues who might be thinking about coming out:

This is not to say that the WWE hasn't had an uneasy relationship with the gay community in the past. In 2011, the organization had its partnership with GLAAD tested after one of its announcers tweeted the word "faggot" to a colleague. Indeed, a lot of the melodrama written into WWE scripts has historically consisted of dialogue in which two opposing wrestlers challenge each others' masculinity. Characters like Johnny B. Bad and Golddust would also appropriate effeminacy in order to disgust, distract and subdue their opponents. However, one could ague that the fear and revulsion of femininity — not homosexuality — lay at the core of these performances.

Austin's statement reiterates the organization's extant position on LGBT equality and sends the message that same-sex marriage is an issue supported by a diverse community of Americans — yes, even professional wrestlers. Unfortunately, it is unlikely that this show of support for the LGBT community will translate into a broader (and much needed) discussion about sexism in the wrestling industry.