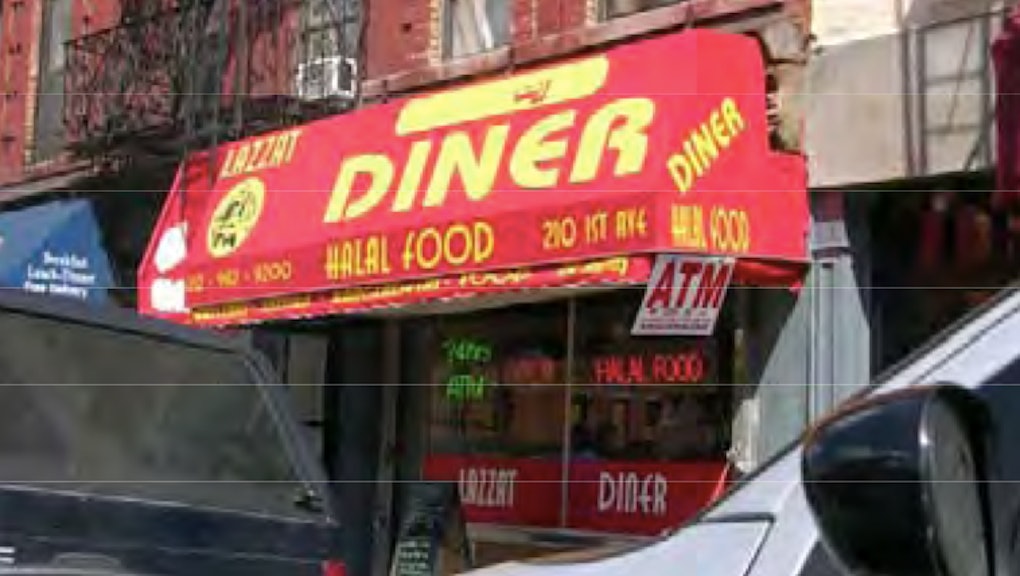 One thing we've learned over the past ten years: Spying on innocent people is extremely boring.

Imagine spending hours in a bakery, thirsting for national security intel from customers whose main concern is finding the right pastry. Or chatting up a deli owner in Queens, hoping for clues to an impending terror attack but arguing over gum prices instead.

These are some of the many dull feats accomplished by the Zone Assessment Unit, a crack squad of NYPD hotshots charged with hanging out in Mosques, businesses and community centers throughout New York's Muslim neighborhoods, in a remarkably impotent stab at nipping terrorism in the bud.

The unit was disbanded on April 15, but its legacy remains a fraught topic of discussion. To highlight what a colossal waste of time it was, data artist Josh Begley has assembled this frightening mosaic of surveillance photos taken from the ZAU's recovered files.

Here's a rundown of what they found: grocery stores, discount clothing outlets, delis, restaurants, bakeries and Mosques. As far as the cops can tell, none of these contain hidden backrooms filled with blueprints, flight plans or plastic explosives. Just regular people doing regular stuff.

Yet the longer you look, the creepier the images become.

They eventually assume a sinister quality, transforming into a chilling expression of how post-9/11 racial profiling has seeped into the ordinary segments of our daily lives. In the purview of the NYPD, these everyday places become threatening "locations of concern."

"In aggregate, the photographs appear quite banal," Begley told Co.Exist. "In some ways that's the terror — our own police department thought it necessary to map entire communities of people for no other reason than who they are or where they worship."

But perhaps most telling are the results these efforts yielded. Since its inception in 2003, the Zone Assessment Unit has failed to generate a single lead or uncover a single terrorist plot. This is despite drawing from $135 million extra in federal government money provided to regional law enforcement after September 11, at least $1.3 million of which was spent on ZAU vehicles alone.

No matter how relentlessly useless the unit proved to be, former NYC Mayor Michael Bloomberg and the NYPD kept defending it as a very "important tool," no less than "central to keeping the city safe." Their tune changed only once the Associated Press published a series of investigative reports in 2011-2012, and a number of related civil rights cases came to public light.

"I never made a lead from rhetoric that came from a Demographics report, and I'm here since 2006," conceded Thomas Galatin, then-commanding officer of the NYPD Intelligence Division. "I don't recall other ones prior to my arrival. Again, that's always a possibility. I am not aware of any."

The mistrust this bred in the city's Muslim communities is equally hard to quantify. The Nation reports: "When it became common knowledge that undercover officers were frequenting certain Muslim-owned businesses, business dropped dramatically, inspiring some business owners to sue the city of New York."

And collateral attitudes persist even after the ZAU's disbandment: "We are concerned that even though the [Zone Assessment Unit] doesn't exist anymore, there is all this information that they have compiled," explains community organizer Fahd Ahmed. "We have questions about whether this information will continue to be used for other policing matters and whether the forms of profiling that the unit was engaged in will transform or change into newer forms of profiling under the auspices of other units."

These are all good questions, many of which will inevitably be answered with time. But in the meantime, we're left with these chillingly banal photographic reminders of their legacy — and the real-life strain this could place on NYPD-Muslim relations for years to come.