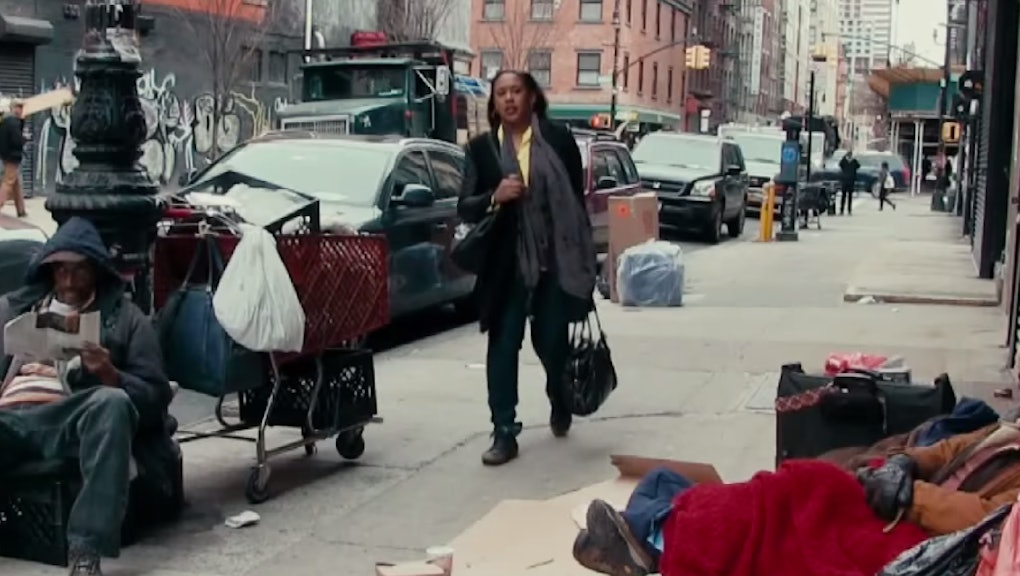 Would You Recognize Your Mother if She Were Lying Homeless on a Street Corner?

In corners and alleyways, on train platforms and under overpasses, New York City's homeless congregate. But with tens of thousands of homeless people currently living in the region, the sight of the destitute and desperate has become so commonplace at this point it's almost as if they aren't even there. Let's be honest, it's much easier to look through someone then to worry about where they'll be sleeping that night.

Now a striking social experiment suggests that the homeless community has in fact become so invisible of late that many people might not even recognize a family member if he or she was panhandling on the street corner in front of them.

The project, called Make Them Visible, was spearheaded by New York Rescue, a 142-year-old nonprofit that recruited people to pose as homeless in New York's Soho and Tribeca neighborhoods. With hidden cameras rolling, New York Rescue filmed unsuspecting pedestrians as they walked by relatives pretending to be homeless. The results were dramatic.

When the passersby were later shown images of them walking blankly past an uncle or cousin, many were overwhelmed.

Tom, one of the participants, had been married to his wife for 34 years but didn't realize she was right in front of him. He was so stunned after seeing the video of the encounter that he had a hard time regaining his composure.

One participant was so shocked he didn't want to appear in the final video. "There’s only one person that didn’t make it into the film — because they couldn’t handle the fact that they walked by their family," the film's director Jun Diaz said. "It happened every time."

Image Credit: Coalition For The Homeless

Make Them Visible hopes that their project will put a human face — literally — on a problem that appears to be growing increasingly impersonal. Last year, the number of homeless people in New York rose by 13% while New York State garnered the dubious designation of being the state with the largest percent increase in homeless people around the country. Across the United States, meanwhile, nearly a quarter of all homeless people are younger than 18 — a sign that the problem is likely to get worse before it gets much better.

Ultimatley, t's almost impossible for those who have not lived through being homeless to imagine what it would feel like to have your life scattered in the wind, with basic needs like shelter and food left up to the discretion of strangers.

But that's exactly why efforts like these to humanize the problem are so crucial. The ghosts you walk by every day on your way to work could one day be someone you know — even, perhaps, someone in your family.

Image credit: Coalition For The Homeless

For more information about how you can help the homeless in your neighborhood, visit sites like NYCRescue.org, the National Coalition for the Homeless, or check out this helpful explainer.