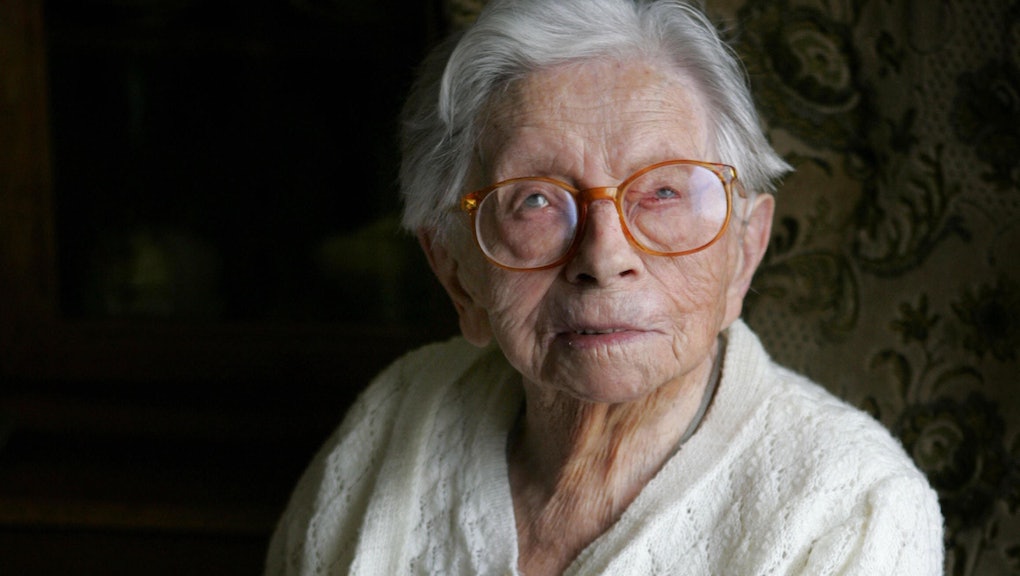 The news: By the time she died in 2005, 115-year-old Hendrikje van Andel-Schipper was the oldest living person on Earth and was famous for her remarkable health and mental acuity even in advanced age. Now, even in death, she is continuing to make breakthroughs by helping scientists understand aging.

Since van Andel-Schipper donated her body to science, researchers at the VU University Medical Center in Amsterdam have been studying her body's chemistry and biology and on Wednesday, the team published their results in Genome Research. Though van Andel-Schipper's blood has not revealed some secret elixir of life, it has provided some insight into how our body grows at a molecular level and how that process could potentially be delayed.

And what they found was shocking. An average human is born with around 20,000 stem cells, but only 1,300 of them are considered active. But by the time of her death, van Andel-Schipper only had two. "At first I could not believe that it was true. I thought it must be a technical error. It cannot be true that this person can still be alive with two stem cells," said lead researcher Dr. Henne Holstege.

The team then looked at the telomeres in van Andel-Schipper's blood. Telomeres are protective caps that preserve the DNA, and they grow shorter as cells divide. In van Andel-Schipper's case, the telomeres in her blood were much shorter than those found in her other organs — indicating that division exhaustion in blood cells may be a key factor in death.

What does this mean? The research indicates that we may all be born with an expiration date: the exhaustion of our stem cells and telomeres. But there may also be a way around that. If you extracted your stem cells while you were young, then injected them back into your body later in life, you would once again have a healthy supply to replenish your blood.

"If I took a sample now and gave it back to myself when I'm older, I would have long telomeres again — although it might only be possible with blood, not other tissues," said Holstege.

Of course, based on these findings, researchers now want to determine if this is a viable option to prolonging life. It's remarkable that even without medical intervention, van Andel-Schipper's limited stem cells lasted long enough to sustain her in advanced age.