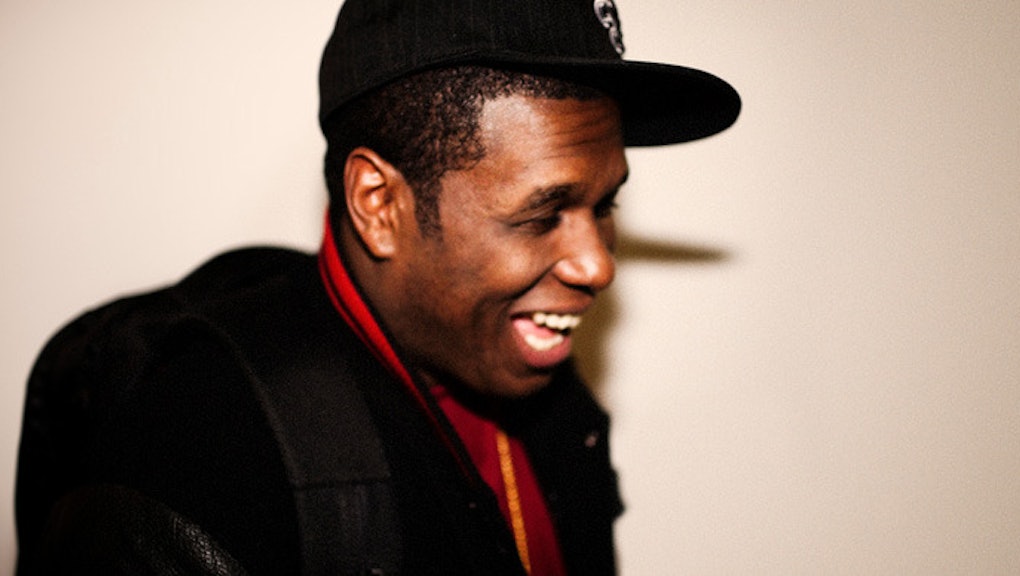 This Is One of the Most Important Rappers in Hip-Hop, but He's Never Released an Album

In the past seven years, Jay Z has called Jay Electronica "scary good" and signed him to his label; Jay Elect has garnered a mammoth following that has enabled him to headline prominent hip-hop festivals; and he has a long list of high-profile co-signs (everyone from Nas to Erykah Badu to Diddy) behind him. If you ask any hip-hop fan, they'll know Jay Electronica's name. That's strange because he's never released an album.

Last Friday, though, it looked like he was finally ready to make his bold artistic statement:

When he made the announcement, the Internet erupted in speculation about the album hip-hop has been waiting on for years. But this date is reportedly not the release date for his album (which is now confirmed to be dropping next year). It's looking like something far bigger.

Jay Electronica's rise began in 2007 with one of hip-hop's most singularly bizarre releases: a 15-minute piece of rap music without drums set entirely to the soundtrack of Eternal Sunshine of the Spotless Mind.

But the beats aren't what most struck people about the record. Unlike most of his contemporaries, Jay Electronica's verses revealed an unimaginably profound emotional sensitivity to and spiritual understanding of the world. Immediately after the album's release, the biggest names in hip-hop sought him out and made him the legend he is today. But in all the years since, he hasn't released anything nearly as long. And he's remained shrouded in mystery.

That's because he is the kind of true artist that doesn't exist anymore. He has refused the compromises most every other artist makes: "What makes me different from everybody else just boils down to dissatisfaction. The bar is so low in rap — mediocrity is king! Who's really trying to push the boundaries and move forward? Who's really trying to come up with a new approach and make me feel wild?"

He's released some singles when he felt wild — for example, "Exhibit A" in September 2009 and "Exhibit C" in December 2009. The strength of the latter got Jay Z to sign the mystical rapper to Roc Nation in 2010. But since then, Electronica's fabled album has remained absent.

Yet, his legend only grows. A month ago, Complex, one of rap's great magazines, wrote him an open letter apropos of nothing. They asked a simple question: "What you waitin' on?"

He's waiting to make the perfect album; the record that shakes hip-hop out of its stupor. According to his producer, Just Blaze, he may have done it. But, as Blaze told VladTV, "The situation is Jay moves at his own pace." In refusing to play the rap game, Jay Electronica has become its savior. His music proves that popular rap can still be a spiritual experience — that it isn't all just about hashtags and slang. He's pitching a perfect game, and almost a decade into an album-less career, he has the world hanging on his every word. He matters because he's proving we still care about real art without compromises.

It's not clear what will happen on July 12. That is, in fact, the final day of the 10th annual Brooklyn Hip-Hop Festival that Jay Electronica is headlining with legendary rappers like Raekwon (of Wu-Tang fame). That's probably not the heavens-parting event, though. For years, Jay Electronica has been quietly working on a multimedia musical documentary charting his own mysterious spiritual journey through India and Nepal. He's teased clips of the footage in his video for "Dimethyltryptamine" and in a minute-long promo for the song "Dear Moleskine." On July 12, hip-hop may finally get their visionary's big statement and a better idea of who this mysterious rapper really is.

That's why one tweet from him can matter so much. In an era of over-production, Jay Elect has made a name for himself on a handful of perfect tracks and an overwhelming aura of mystery. At times, his biography may sound like fiction: He used to be homeless and now dates a Rothschild heir; he's worked with the legendary J Dilla and has a kid with Erykah Badu, but he's produced next to no music.

This last announcement of his was an anomaly, though. Usually, when he tweets something of substance, he deletes it. To be a fan of Jay Electronica is always to be looking for him.