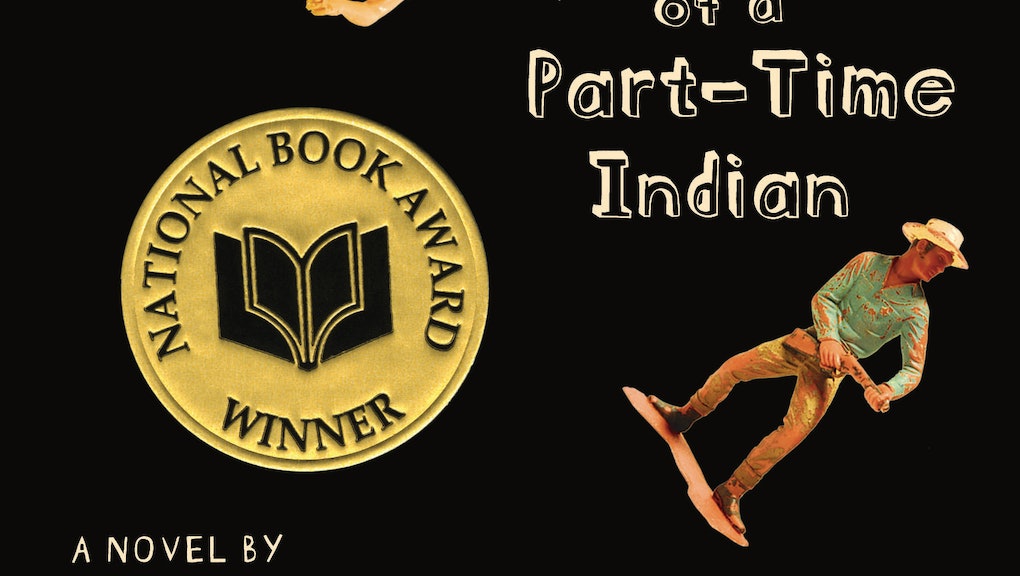 "They're the four hugest words in the world when they're put together. You can do it. I can do it. Let's do it." This passage from Sherman Alexie's beloved and oft-banned The Absolutely True Diary of a Part-Time Indian epitomizes the sentiment of teen-led support for a book that keeps getting banned by parents.

Earlier this month, when the American Library Association released its list of the most frequently banned books of 2013, the critically-celebrated True Diary was smack dab in the middle. This week, the book is making headlines again, this time because of a new ban in Idaho and a harmless teen-led book giveaway that led to the cops being called.

In early April, the novel was banned from the 10th grade curriculum in Meridian, Idaho, thanks to parents who found the book too filled with "anti-Christian views" and with language "we do not speak in our home."

The semi-autobiographical novel, published in 2007, is a coming-of-age story about a young Native American teenager who leaves his poverty-stricken high school to attend an all-white high school 22 miles away. The book has received many formal accolades, including being nominated for the National Book Award and winning the 2009 Odyssey Award. It's image-heavy and accessible to high school students, as it offers important commentary on race relations in the U.S. It also directly addresses a slew of issues that resonate with teens, like drinking, sex and forming an identity. Even with the added cultural resonance in Idaho — there are five Indian reservations in the state — many parents didn't see the book fit for teen readers.

To protest the ban, high school student Brady Kissel made a petition, gathering 350 signatures and asking for the book to be kept in schools. As she put it the outrage is, "the very idea that our education is being censored."

Two Washington residents, Sara Baker and Jennifer Lott, heard of the petition and created a crowdfunding campaign to raise $3,400 to buy and distribute 350 copies of the novel (one for each signature on the petition) for Kissel to give away on World Book Night with the help of local book store Rediscovered Books. Of course, not everyone was pleased with the demonstration, and police were sent to the giveaway after concerned 911 callers were worried about teens getting books without their parents' permission. The cops found there to be absolutely nothing wrong.

From the ban and the police call, a groundswell of support has formed. Alexie, the author, weighed in saying, "I am honored by the hundreds of Meridian students who showed incredible passion and courage for books. Mine, yes, but literature in general."

There is still no move to re-introduce the books into the curriculum, but there's another book giveaway planned for next week. As Alexie famously told a crowd last year, whenever his book is banned, sales spike. We know who gets the last laugh.