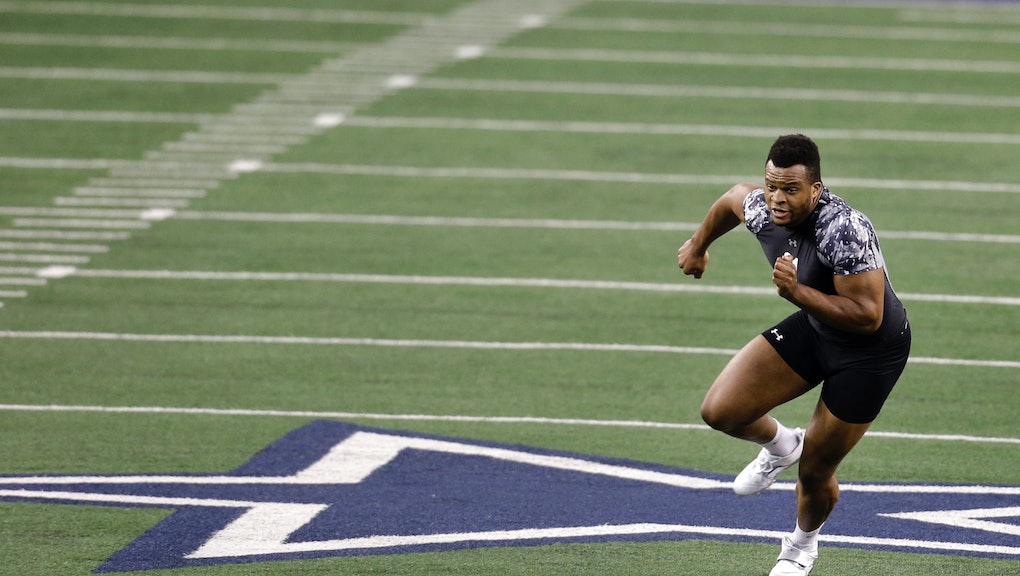 If an NFL player — pick any of the biggest, baddest ones out there — were to bump shoulders with one of his earliest farming ancestors (circa 10,000 -4,000 years ago), who do you think would fall down on his butt?

According to the latest research out of Cambridge, even the strongest of modern man would consider ancient man to be, well, a monster. Even NFL players don't match-up well with ancient hunters and farmers.

Human life has changed drastically since the days we lived in caves and hunted woolly mammoths. Though there are many people who work in labor, there are some of us who never leave our desks all day. Most people never have to worry about fighting off predators or hunting down food, and we have cars or public transportation to get us where we need to go.

And apparently, our bones have evolved to reflect this change — for the worse.

New research emerging from Cambridge University indicates that since the emergence of agriculture in Central Europe around 5300 BC, the bones of those who lived near the Danube river valley became less healthy and strong. Men in particular experienced a decline in mobility and lower limb loading for 3,000 years, as jobs diversified and allowed many to pursue less labor-intensive professions.

"My results suggest that, following the transition to agriculture in Central Europe, males were more affected than females by cultural and technological changes that reduced the need for long-distance travel or heavy physical work," said Alison Macintosh, who led the research. "This also means that, as people began to specialise in tasks other than just farming and food production, such as metalworking, fewer people were regularly doing tasks that were very strenuous on their legs."

Kind of reminds us of Wall-E:

What does this mean? So far, Macintosh's research and findings are limited to Central Europe. But bones discovered in the region have been remarkably consistent in strength and durability. Even Europe's early farmers, who began settling down 7,300 years ago, had bones that were on average as strong as modern cross-country runners'. But just within 3,000 years, bones became reflective of those who live a sedentary life.

"Even our most highly trained athletes pale in comparison to these ancestors of ours," said Colin Shaw, who contributed to the research. "We're certainly weaker than we used to be."

Why is this important? The correlation between physical activity and bone strength helps us understand how many modern medical conditions, such as osteoporosis and obesity, came about. At the beginning of civilization, our ancestors had to travel extraordinary distances and hunt for hours just to get some food. Most of us will never have to live under those strenuous conditions, and as such, we have developed medical problems that befit our sedentary lifestyle.

"We have an overabundance of nutrition and we train better," Shaw said, "but we're overweight and we're not challenging our bodies like we used to."

Although that doesn't mean we should all start hunting down our own food, the research helps us understand how our ancestors pushed the human body to much greater limits and how our bodies have changed to reflect our relative lack of activity.