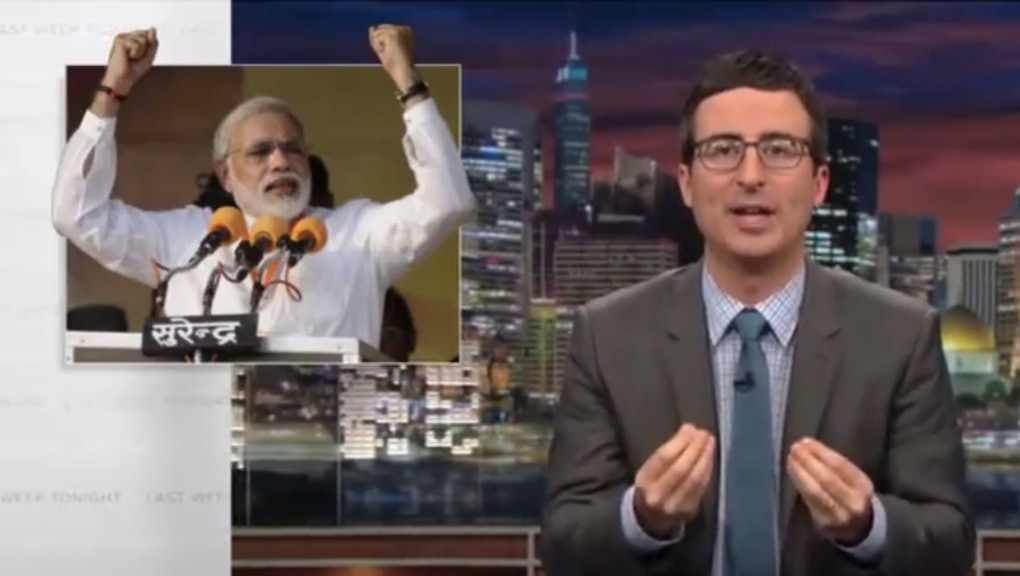 The man tipped to be the next president of India, the world's largest democracy, is also one accused of orchestrating ethno-religious riots that killed hundreds over a decade ago.

This has set off alarm bells across the globe — but not in the U.S., where the media seems to not be bothered.

As John Oliver pointed out in his freshly inaugurated HBO weekly news hour Last Week Tonight, little has been said in American cable media about the gigantic undertaking of the Indian elections or the controversies surrounding the presidential frontrunner, Narendra Modi.

Voting in India's presidential and parliamentary elections has entered its fourth week — a necessary length to cover the country's expansive constituencies — and is set to carry on until May 12. Despite this, Oliver's scan of the American media's coverage of India wielded pitiful results: A Fox News blitz over footage of a loose leopard and a round table of octogenarians who concluded that the elections shouldn't concern Americans because India "isn’t even in our hemisphere."

Oliver details the other lead candidate Rahul Gandhi's political lineage as well as Modi's impressive campaigning-by-hologram tactic to cover India's 543 constituencies, and his ambitious platform to put toilets in every home, a laudable campaign promise in a country concerned with dire sanitation and public safety needs.

But, aside from the politics and the sheer number expected to participate in the elections, there needs to be a little something to hold international interest, says Oliver. "No election is complete — or entertaining — without a little scandal," he says, introducing Modi. "A 'je ne sais, genocide'."

Modi served as chief minister of India's Gujarat state in 2002, the year that inter-communal riots broke out, injuring 2,500 and killing more than 1,000 people, a majority of whom were Muslim. Modi, a member of the Hindu-nationalist BJP, was accused by many of orchestrating the riots and condoning violence against Muslims. He was officially cleared of any complicity by a 2012 Supreme Court investigation.

He and his party are poised to sweep the elections, according to recent opinion polls.

And voters might democratically put into power a man who has been, at the least, incredibly blase about the fact that thousands of citizens were injured, killed or missing under his watch. Meanwhile, the U.S. media has little to say.

India's voting age population numbers at around 814 million people. To put this in perspective, if India retains its turnout from the last parliamentary election (an impressive 58%), the number of people voting outnumber the entire U.S. population by about 158 million.

Maybe a good lambasting by the Daily Show alumnus is enough for Americans to sit up and take notice.