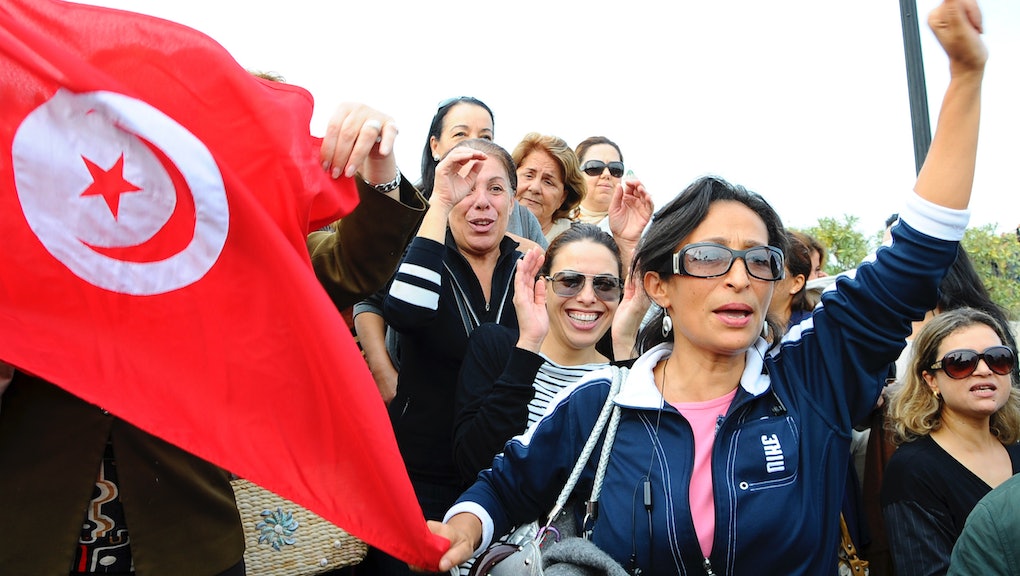 Tunisia Just Took a Step on Women's Rights the U.S. Has Yet to Make

The North African nation of Tunisia may be best known for its 2010 uprising that helped spark the Arab Spring, but recently the country took a huge step for women's rights that the U.S. hasn't even come close to reaching.

Tunisia's interim government notified the United Nations earlier this month that it had decided to lift all reservations on the UN Convention to Eliminate All Forms of Discrimination Against Women (CEDAW). The decree lifting the reservations on CEDAW was issued in 2011, but the matter went without much discussion until the notification, signed by UN Secretary-General Ban Ki-moon last week, was made available online.

Tunisia ratified CEDAW in 1985. Not only has the U.S. not done so, it has the distinction of being the only industrialized nation among the eight countries that has not recognized the document, which is often referred to as the international women's bill of rights. Some say that the U.S. decision not to ratify CEDAW may have to do with misconceptions that it makes abortion more widely available or that it could encourage a shift away from nuclear, two-heterosexual-parent families.

Tunisia's removal of CEDAW reservations is a noticeable step for anyone following the country's transition. The country has often been lauded for the legal rights Tunisian women enjoy. Women's suffrage, the right to contraceptives and the right to pass on nationality have been legally ensured in the country since long before they were even part of the U.S. political conversation.

Removing its reservations to CEDAW better reflects Tunisia's national laws on an international stage. The government removed its reservations on equal rights for men and women to pass on nationality, to move within their country and choose their residence, and within matters pertaining to marriage, family, adoption and property rights.

The latter is likely the most controversial move for the government. On one hand it faces criticism from Tunisian women's rights activists for inheritance laws modeled on Islamic jurisprudence, which does not view female and male heirs equitably. Meanwhile, a fair share of Tunisian politicians are digging in their heels against the decree because of changes they fear will come in family and property law.

The country hasn't come so far as removing a general blanket disclosure stating it will not conform with parts of CEDAW that conflict with its constitutional self-definition as a free, independent, sovereign republic with Islam as its national religion. But the removal of reservations places Tunisia, a small country facing its own economic and political battles after a recent revolution, exactly where it wants to be on the international stage, and on the right side of history.