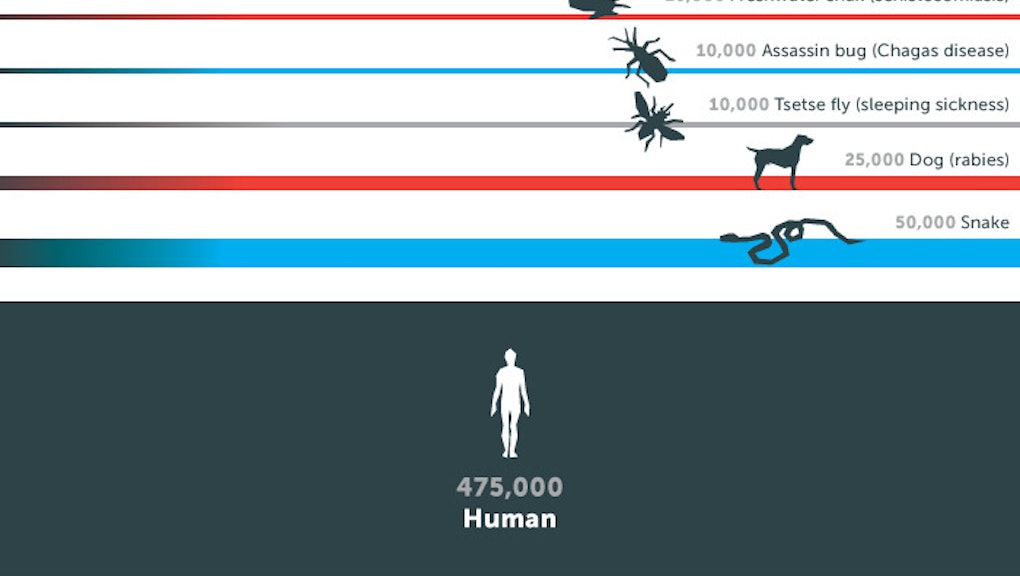 The World's Deadliest Animal Has Been Declared, And It's One You'll See A Lot This Summer

What's the deadliest animal Mother Earth has to offer?

The hidden shark, with its mouth full of razor-sharp teeth? Nope.

How about man, the deadliest game? Pretty close.

Velociraptors? Maybe if they weren't extinct.

According to statistics assembled by the Bill Gates' Gates Notes and transformed into this awesome infographic, the most lethal animal on the planet is something we know all too well, but rarely think about: mosquitoes.

Gates even put himself in danger recently, exposing himself to the world's deadlist animal. He soonafter posted the image to Reddit, where it (unsurpisingly) shot to the top of the front page.

Because of their insane fatality rates, Gates argues that we should really be having Mosquito Week rather than Shark Week. Mosquitoes are by far the most lethal threat to people across the world, particularly in parts of South America, Africa and South and Southeast Asia, as this map from the Centers for Disease Control (CDC) shows:

And if you're looking for flash, Gates' mosquito week may actually prove to be just as interesting as Shark Week, with testimonials from people infected with malaria and scientists working to defeat the threat. Gates highlights this harrowing account in particular:

"I awoke to what felt like lightning going through my legs, and then spreading through my body and in my head. Probably the worst headache, body aches, and chills you could possibly imagine. It felt like I was being stung repeatedly by an electric shock gun and could barely control my movements. The pain was so intense; I actually believed I was dying, literally crying out in pain so bad that I was taken to a 24 hour clinic that night at 3 a.m."

Despite medical advances, the World Health Organization estimates about half of the world's population (roughly 3.4 billion people) remain at risk of malaria infection. Across the world, some 219 million (from a range of 154-289 million) are infected yearly. In 2012, about 90% of deaths occurred in the WHO African Region, and with advances in the way we combat mosquitoes, many of these deaths could be entirely preventable. Good progress is already being made, with mortality rates dropping 42% globally and 49% in the WHO African Region since 2000 alone. Direct costs of malaria (illness, treatment and premature death) are estimated by the CDC to be at least $12 billion annually.

Nature.com asked experts if eradicating mosquitoes entirely would upset the world ecosystem and found tepid support for keeping the pests alive. But while mosquitoes aren't particularly critical to ecosystems, ecologist Phil Lounibos said that eliminating one species of mosquitoes would just lead to others usurping them. Others are less sure.

"If there was a benefit to having them around, we would have found a way to exploit them," said CDC medical entomologist Janet McAllister. "We haven't wanted anything from mosquitoes except for them to go away."