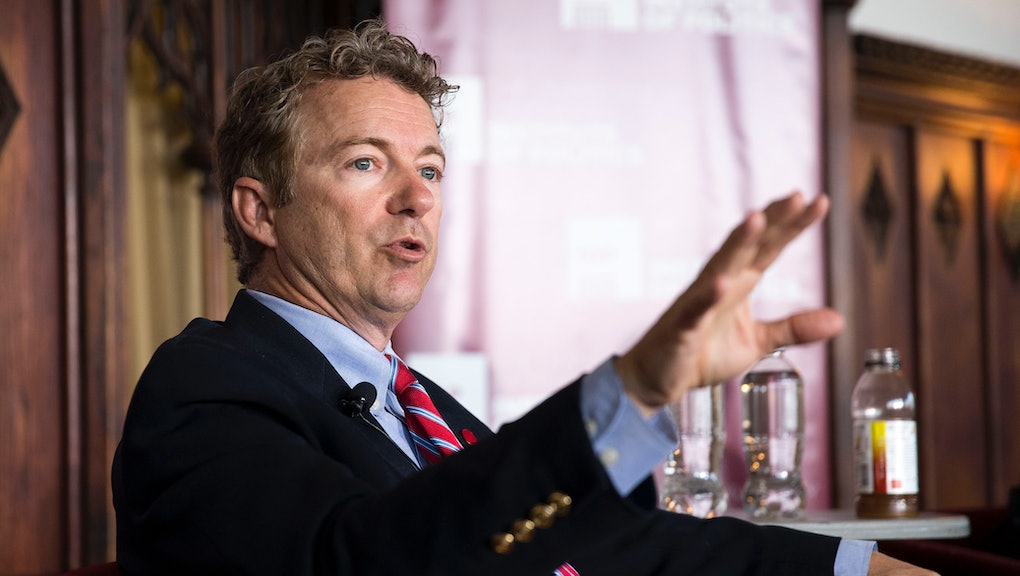 Dear Senator Paul, What Happened to Your Libertarian Ideals?

The Middle East peace talks, organized by the U.S., have stalled and Paul launched himself into the debate over Israel-Palestine this week by introducing legislation that would cut U.S. aid off from Palestine until its new government formally recognizes Israel's right to exist.

"Israel cannot be expected to negotiate with an entity that doesn't believe it should exist and that has used terrorist tactics to seek its end," Paul said Monday.

His reaction — to the Palestinian Authority's move to form a reconciliation government with Hamas (which doesn't recognize Israel) — is a move sure to please the traditional Republican Party but cuts against the core libertarian principles that have brought him this far.

It is becoming increasingly obvious that Paul wants to run in 2016 and has focused on splitting the difference between libertarianism and the Republican mainstream. But by straddling the fence, he'll please neither faction he is trying desperately to court and will leave behind many of us who believed in him.

If he wants our support in advance of 2016, he's going to have to turn it around. Paul should embrace the libertarian populism his father championed, raise hell in the Senate and in the primaries and offer Americans a truly independent and nonpartisan choice in 2016. He must stop taking issues sure to please the Republican right — like the U.S. relationship with Israel — and repeat eye-rolling neoconservative talking points. He needs to get back to basics.

Mother Jones recently unearthed a 2009 video of Paul giving a speech at Western Kentucky University excoriating Dick Cheney for his support for the Iraq War, claiming that Cheney switched his mind on the wisdom of the war after he worked for Halliburton.

Mother Jones, a left-liberal magazine most likely interested in splitting up the Republicans than endorsing Paul, may have accidentally reminded everyone of what we like about Paul and the things that could help him win the presidency in 2016. So, please left-wing blogosphere, unearth more old Paul footage!

Paul became senator against highly unlikely odds, beating a much more popular and heavily funded candidate by using the same libertarian populism that made his dad — former Congressman Ron Paul — so popular. The 2009 footage was the standard for Rand Paul at the time: anti-war, shooting arrows at the political establishment and not afraid to ruffle feathers.

But since then, libertarians have been incredibly frustrated with Paul for many of the positions he has taken and on his stubborn insistence on trying to balance the fence between his father's views and more conventional Republican views. The result? He has alienated his most important voting bloc and proved that the Cheney-Bush-Christie wing of the party wants nothing to do with him no matter how much wiggle room he gives them.

Paul has been wishy-washy and very unlibertarian on Iran sanctions, Guantanamo and has been bad on Israel and their occupation of the Gaza Strip and the West Bank since he ran in 2010. When it came to Israel, Ron Paul didn't compromise: He repeatedly stated that blind loyalty to Israel hurts both countries, he wanted to abolish foreign aid for all countries without a politically charged litmus test and he called the 2009 Israeli attacks on the Gaza Strip — in which they used cluster bombs and chemical weapons — an "atrocious massacre." His son is heading in quite a different direction.

There's more. Rand Paul also actually criticized President Barack Obama for his proposal to cut Tomahawk missiles from the budget. And let's not forget that he endorsed Mitt Romney over his father while the GOP was still scrambling to keep his father out of the convention. We libertarians have a long memory.

And what has Paul got out of these mealy mouthed positions, straddling the fence and splitting the difference between his father's pure libertarianism and the warhawks in the rest of the party? Nothing. Absolutely nothing. They still hate him. As far as they're concerned, no matter how much he sucks up to them, he will never be anything other than his father.

Paul is at his best when he uses that same libertarian populism that got him elected. Last year, people of all political persuasions lept at the chance to #StandWithRand when he delivered a 13-hour filibuster on the Senate floor against Obama's lawless drone warfare policies and indefinite detention. Last month, UC Berkelely liberals gave the Kentucky Republican a standing ovation for his attacks on the NSA and the surveillance state in general.

When Paul defends peace and the Bill of Rights — just like his dad always did, uncompromisingly, for 40 years — people love him!

Paul will never take my advice, of course, but he should embrace the fiery radicalness from the Mother Jones video — not run from it — and stop once for all placating the neocons, warhawks, torturers and big government Republicans that would love to unseat him any way they can for even the slightest deviation of their party line.

Paul should use his Senate bully pulpit to focus every second of every day filibustering, calling attention to and opposing the horrible things the U.S. government is doing overseas, torture, JSOC death squads in virtually every country, expanding NATO eastward, coups, sanctions, the drug war and drones. In other words, Paul should focus his time solely on the most elementary and fundamental use of state power: war in all of its forms.

This is a wave Paul can ride to 2016. The American people definitely agree with libertarians in wanting a more restrained foreign policy, and Paul is the perfect candidate to give that to them. He should focus on foreign policy and civil liberties — the real blade of state power —and lead by example on what a free society will look like. Thanks to the technology and power that has been unleashed by the free market, we now can.

We have the tools now to circumvent state power and build our own communities of consent and societies built on liberty. Homeschool and/or unschool your children. If you get on a jury, keep nullification on the table. Take Lyfts to local farmers markets to buy organic produce in privately secured neighborhoods. This is how peaceful order arises.

The political process will never yield these results — only direct action will. That way, when people respond to libertarians with predictable and valid objections, we can point to tangible answers. And in the mean time, the state will continue to reveal its true colors all around us every time it inevitably resorts to the iron fist that lie at as the heart, soul and blade of all state action.

So please, Sen. Paul, stop sucking up to the GOP. You might get a few more Republican votes that way, but how many libertarians would there be if your father had caved and compromised? Run for president for the sole purpose of dismantling the U.S. empire, repealing the last 10 years of "anti-terrorism" legislation, ending the drug war and restoring the Bill of Rights. Take away the real blade of state power, and the rest of the task will be that much easier.

If you do that, you'll have my vote. Then we libertarians will do the rest.