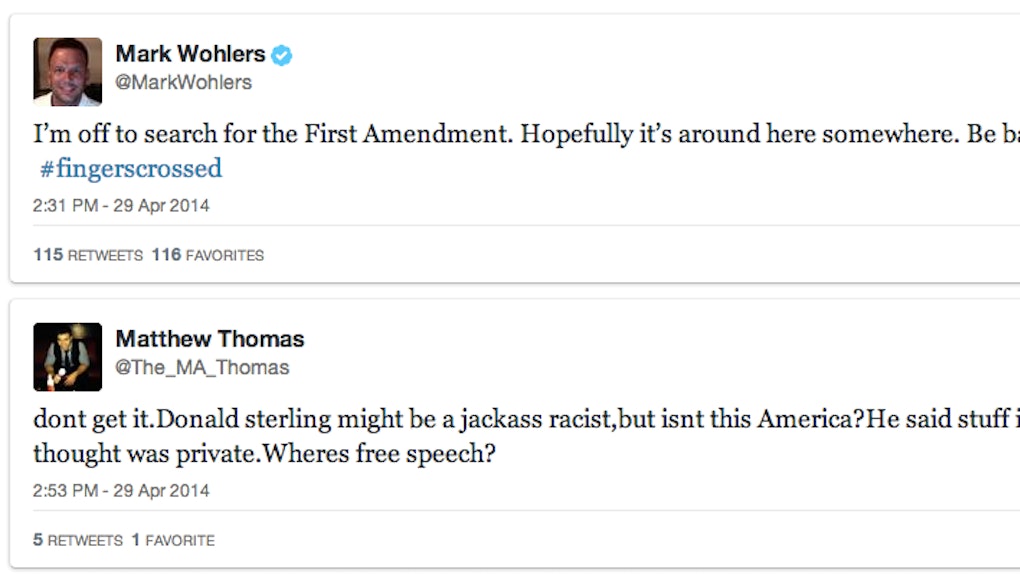 Following a leaked recording of Los Angeles Clippers owner Donald Sterling's racist comments to his girlfriend, NBA Commissioner Adam Silver issued a lifetime ban against Sterling on Tuesday. Citing his racist remarks, Silver promised to do "everything in [his] power to ensure" that the NBA Board of Governors forced Sterling to sell the Clippers and sever all links with the organization.

The Internet erupted with reactions, from current and former players to major public figures and celebrities, overwhelmingly applauding the NBA's swift and harsh response to such blatant bigotry within the ranks of its elite leadership.

Oh, and did I mention a few constitutional law experts came to the party, just dying to weigh in on the injustice the NBA hath wrought?

As a quick refresher and point of order — no, Sterling's First Amendment rights were not violated. In fact, they weren't even remotely involved.

The First Amendment still only means that the government can't punish you for speaking or prevent you from speaking without an awfully good reason. Your employer, boss, friend, forum moderator or any other member of a private institution can still tell you to can it. Don't believe me? Go tell off your boss and let me know how it goes.

For the more graphically inclined, here's a lovely reminder courtesy of the fine folks at XKCD:

Mocking the knuckle-draggers who failed 8th grade civics is fun. Like, really fun. I'm guilty of it. The amount of joy I get from reading through the disjointed ramblings of armchair legal experts and Founding Fathers aficionados is hard to put into words.

Yet, despite their lack of basic civic awareness, the Sterling peanut gallery is inadvertently raising an important issue that makes many of us squirm internally.

The uncomfortable truth is that the court of public opinion is a fickle beast. The distinction between reasoned opposition and a bloodthirsty mob with a guillotine is thinner than most people want to admit. Why force the issue? Watching some much needed justice being dispensed makes everyone happy, right? Don't get me wrong, this was justice. Just look at Sterling's past record on issues of race. If anything, it's unbelievable that it took so long.

But while popular opinion can often reflect the evolution of societal values more quickly than our institutions, it can also rapidly create an environment of unjustified vitriol and accusations that can derail careers and ruin lives.

Let's not so quickly forget the tragic story of Sunil Tripathi, who was inaccurately accused on social media of being the perpetrator of the Boston Marathon bombings in 2013 and subsequently found dead. Or the story of the harassment that Ryan Lanza, brother of Sandy Hook shooter Adam Lanza, received when he was wrongly identified as the shooter on both social media outlets and major news networks and had his photo, personal information and links to his Facebook page posted everywhere from CNN to BuzzFeed.

The forcing out of Mozilla CEO Brendan Eich over his views on gay marriage is absolutely an example of the free market pairing with public opinion to enforce forward-leaning societal views in a fair and practical manner. Exercising the power of choice is perhaps the purest form of democracy outside of the ballot box, and the very public downfall of Eich and others like him imposes an important type of societal accountability.

However, it's critical to retain perspective and remember the potential chilling effect on speech and expression that a trial by public opinion can cause. Should a CEO's values align with the social stance of the company he or she is leading, especially in the context of societal expectations? Probably. Should successful leaders have to permanently live under the threat of termination for personally held beliefs that have no discernible impact on their work? Maybe not.

Dallas Mavericks owner Mark Cuban raised an important issue when he said that, although he condemned Sterling's comments, he worried about the precedent of punishing an individual for their words rather than their actions.

"What Donald said was wrong. It was abhorrent. There's no place for racism in the NBA, any business I'm associated with, and I don't want to be associated with people who have that position," Cuban said while speaking to the press on Monday. "I think you've got to be very, very careful when you start making blanket statements about what people say and think, as opposed to what they do. It's a very, very slippery slope."

It's important that in situations like Sterling's we engage in some intellectual honesty and recognize that, while societal standards will certainly evolve over time, there has to be some semblance of values and reasons beyond vengeance.

Was it right that the public outcry concerning his racist remarks resulted in a lifetime ban from the NBA for Sterling? Yes. Period. Full stop. It demonstrated that we, as a society, won't put up with such blatant racism and bigotry in any setting and it was the right thing to do.

That said, we owe it to ourselves as a society to look at these public blow-ups as an opportunity to have a meaningful discussion over important issues and not simply as an exercise in outrage and schadenfreude. The solution to bad speech is more good speech. Yes, Sterling should be punished, and he will be. But if we want to make advances as a society, we must do so by learning from these situations and not simply through the threat of public execution, no matter how well deserved.