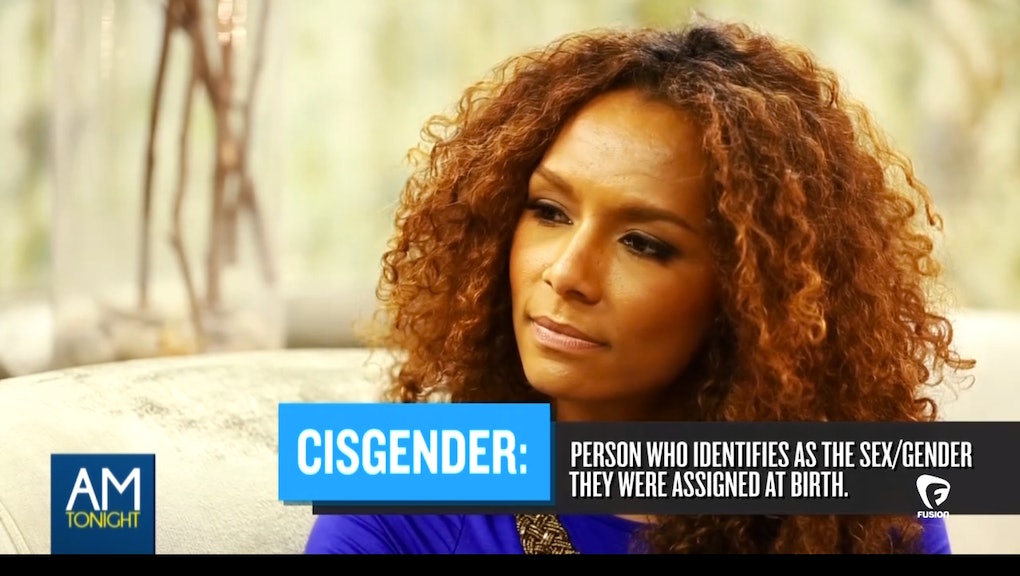 Do you have a vagina? When was the moment when you felt your breasts budding? Do you use tampons? During puberty did you feel like a girl?

These are some of the questions trans and author activist Janet Mock asked Fusion journalist Alicia Menendez during a rather brilliant segment highlighting the problems the media still has interviewing transgender people. The experiment flipped the script on Menendez, showing the emotional impact of the personal and, at times, even clinical questions transgender interviewees are subjected to on a daily basis. Putting herself in Mock's shoes for a few minutes, the Fusion host quickly becomes visibly uncomfortable by the line of questioning.

The segment begins with Mock making a pointed reference to her disastrous interview with Piers Morgan, in which he told her she was so beautiful, he would never have guessed she was a trans woman. "First off, you're beautiful," Mock told Menendez. "What's so amazing about you is that if if I were to look at you, I would never have known that you weren't trans."

When Mock asks Menendez which person she first told that she was cis, Menendez replied, "I have never been asked, or felt the need to tell anyone that I was cis." Mock goes on to ask Menendez a series of personal details (whether she has a vagina, when she first felt her breasts budding, whether she uses tampons) and leading questions (did puberty make her feel trapped by the changes her body was going through? and did she feel like her cisness holds her back in any way?), ending with the particularly patronizing, yet commonplace comment: "I think you're incredibly brave to be a cisgender woman in this world."

After the experience, Menendez explains how she originally thought those kinds of questions were important for "bridging an understanding gap," but after being on the receiving end of that interrogation, she realizes the intimacy of the conversation.

Although the ability to empathize with a subject is vital in broadcast journalism, American journalists often need a refresher course when it comes to interviews involving transgender people. Indeed, when Morgan interviewed Mock in February, he was shocked when she and her Twitter followers took issue with his invasive questioning and general misunderstanding of trans issues. Even the beloved Katie Couric stumbled when interviewing Carmen Carrera and Laverne Cox in January, asking Carrera about her "private parts" being "different now."

Several attempts have been made to explain to people how they should and should not talk about trans issues. But Mock has gone one step further, taking advantage of the recent tradition of using role reversals in order to turn show what happens when such personal questions are asked back on the interviewer.

The video makes the important point that being trans is still seen as a deviation from the norm in American culture, and something forced to continually explain its own legitimacy, to be poked and explored with novelty and even bemusement. Of course, it is none of these, and a failure to recognize this has resulted in far too many conversations filled with reductive, invasive and dehumanizing commentary.

"The preoccupation with transition and with surgery objectifies trans people," Cox explained following the Couric gaffe. It diverts the discussion from more important issues such as the discrimination and violence trans people experience every day.

Perhaps more journalists need to do what Menendez did — to take a second and sit in the hot seat, even for a few minutes. As Carrera told Couric, "There are more to trans people than just that."