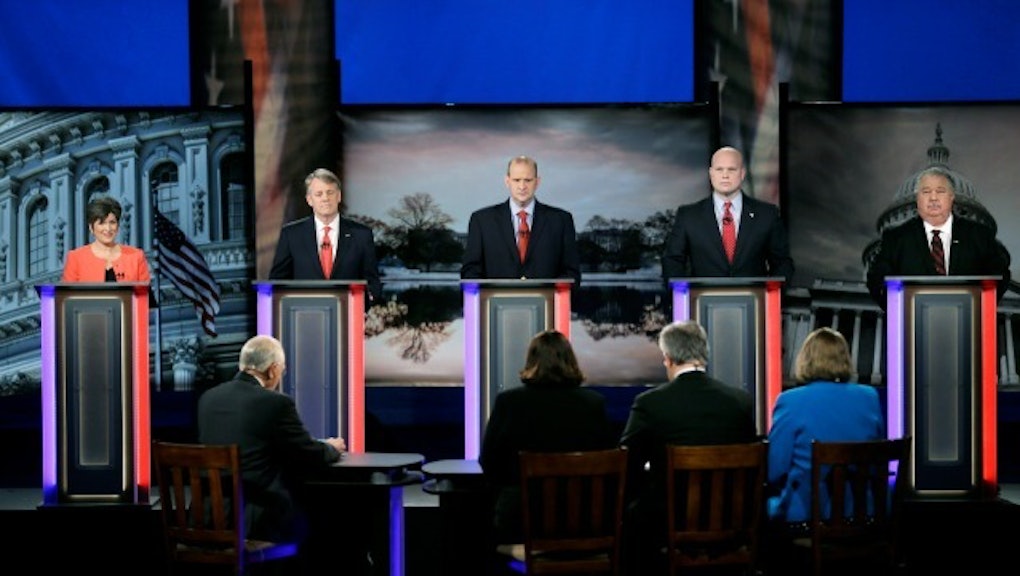 Well, you can't say they're not honest.

Iowa's Republican candidates for the U.S. Senate left little room for imagination last week during a forum in which three out of four said they wouldn't appoint any federal judges who don't have a "biblical view of justice" or follow "natural law" as handed down from God.

The candidates' highly biased definition of legal justice is problematic, and suggests that the prospective politicians either don't care about or don't fully understand why the separation of church and state is such an important part of American democracy.

The debate was organized by The Family Leader, a pro-family, pro-marriage, pro-life organization. Their leader Bob Vander introduced the event by saying, "We have a culture that runs further from god's principles." Vander's comments set the tone, which the candidates continued to build through the rest of the evening. Sam Clovis for example, who sparked controversy recently by claiming President Barack Obama is in office because Republicans are afraid to impeach a black president, said any judicial nominees must be able to "explain to me natural law and natural rights."

Another prospective senator, former Iowa U.S. Attorney Matt Whitaker, went even farther, saying that judges must be "people of the faith" with "a biblical view of justice." State Sen. Joni Ernst stressed that judges must have an "understanding where the Constitution came from and our laws, and they all did come from God." She went on to add that her litmus test would be to research any judges in order to ensure "any decisions that they have made in the past fit those criteria."

While religion — specifically Christianity — continues to play a large role American politics, a large percentage of people in the United States do not identify as Christian. Federal courts and judges are designed to protect the rights of all Americans, irrespective of their religious affiliation. The law isn't dictated by Christianity, nor is it meant to reflect a religious ideal. That a U.S. Senator might feel differently is something voters should be considering at the ballot box come election season.