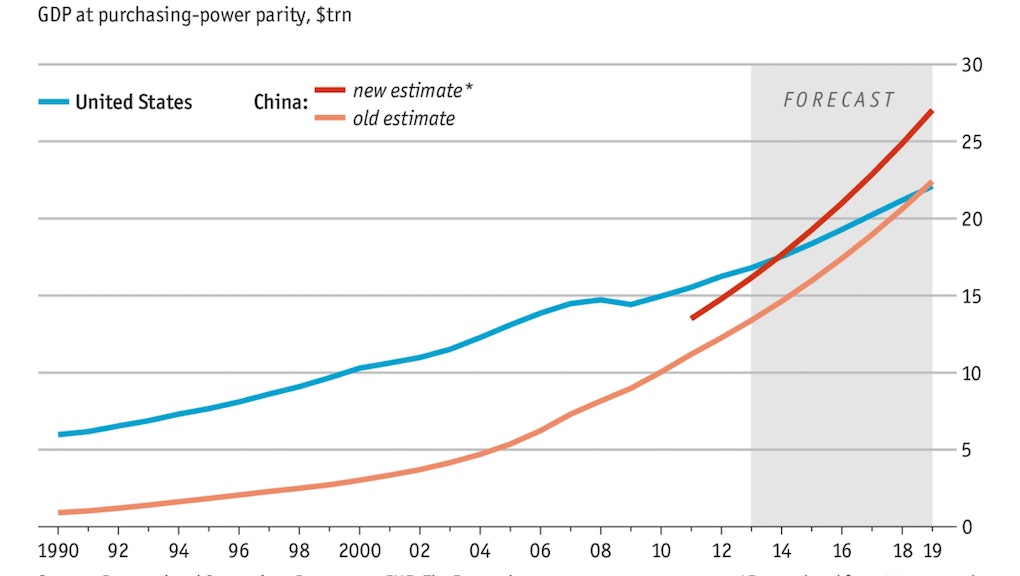 By the End of the Year, America's Economy Will No Longer Be the Most Powerful

The news: For about as long as anyone alive can reasonably remember, the United States has had the world's largest and most powerful economy. But according to new data from the World Bank, that might be about to change. As a new graph in the Economist points out, if this set of data holds true on its current path, China could surpass the United States as the world's largest economy by the end of the year.

Using a purchasing power parity (a technique used to determine the relative value of currencies — essentially, a measure of what money can buy), International Comparison Program (ICP) data indicates that China's PPP exchange rate is roughly 20% larger than previously thought. Economists looked at the ICP's 2011 PPP data and adjusted it based on new growth figures from the International Monetary Fund (IMF) that consider China's rapidly expanding economy, which is now growing at a rate of 7.5%.

Since the world financial crisis, China has been responsible for about one-quarter of the entire globe's economic growth, and even as that rate begins to slow down, China's share of world growth is likely to grow.

The Pacific Century? If these new figures are accurate, 2014 may be the year the "American Century" becomes the "Pacific Century." If China can really overtake the United States in economic size, it would fundamentally alter the global balance of power and potentially translate to a massive decline in American influence in the decades ahead. The loss of American economic primacy could also alter trade and financial dynamics across the world, from exchange rates to commodity prices.

But China is largely succeeding through sheer size and still ranks poorly on international standards of living. The nation is 93rd in per capita PPP terms, just ahead of Albania and Turkmenistan but far behind countries like Libya, Azerbaijan and Suriname. It currently lacks widespread access to social services like health services, unemployment benefits and pensions, and out-of-control pollution is a major issue.

China's growth is also heavily reliant on credit, meaning it needs to translate investments into higher standards of living and increased domestic consumption. So size isn't everything, and China could easily become the world's biggest economy while simultaneously delivering a poor quality of life to its citizens. Indeed, the Chinese lifestyle isn't expected to match Americans' for decades.

Slow down there. And there are some caveats to the ICP's estimates, namely that PPP is a standard that varies wildly depending on the value of goods beyond the price line and has numerous methods of calculation. A cheap TV or microwave might cost next to nothing in Beijing, but it might stop working within a few months. Additionally, China's self-reported figures might be way off, with the unofficial gray economy estimated to be as large as an additional 20%, while local officials have significant incentives to inflate growth numbers to advance in party stature. The ICP even admits that their PPP estimates are hard to pin down, saying "Because of the complexity of the process used to collect the data and calculate the PPPs, it is not possible to directly estimate their margins of error."

Furthermore, PPP has its uses, but comparing the total size of national economies is a curious choice — commodities like steel, oil and gold have relatively stable prices in the international markets. And as Tom Wright points out in the Wall Street Journal, "China can't buy missiles and ships and iPhones and German cars in PPP currency. They have to pay at prevailing exchange rates."

Even if this report overstates the nation's gains, most economists agree that it's not a matter of whether China will surpass the U.S. economy, but when. America will be forced to confront that jarring reality soon. But it shouldn't shock anyone that a nation of 1.3 billion is expected to eventually outcompete one of 314 million.