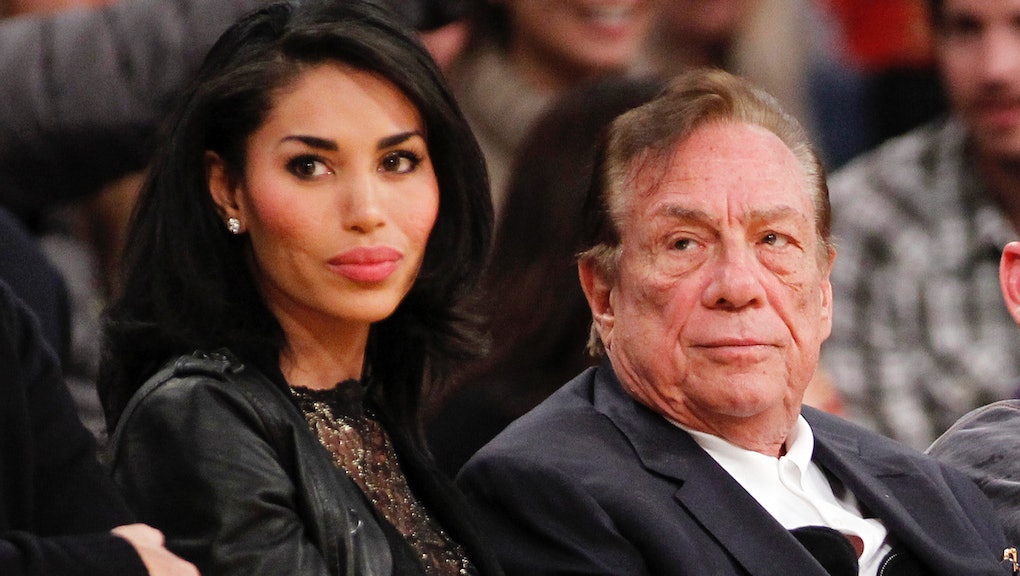 If the NBA Cared About Racism As Much As Sexism, Sterling Would've Been Out Years Ago

Donald Sterling's racist rant has not only cost him his reputation, it cost him his team. Seeing everyone from the NBA commissioner to the mayor of L.A. to players on the team standing together against bigotry was among the most inspiring moments in recent sports history. But while the NBA has made it very clear it has zero tolerance for racism, the league has yet to say anything about Sterling's blatant sexism. And that's a big problem.

Apparently, the fact that Sterling has a well-documented history of being an alleged sexual predator didn't faze anyone at the NBA. One Clipper's hostess publicly stated, "Working for Donald Sterling was the most demoralizing, dehumanizing experience of my life." Another former employee reported Sterling "touched her in ways that made her uncomfortable and asked her to visit friends of his for sex." But neither testimony raised enough eyebrows to schedule a press conference or launch a real investigation. The fact that Sterling's had such a long history of racism before he was confronted by the NBA is troubling, but why was has his sexism consistently gone under the radar?

In fact, even the tape now playing ad nauseum on every news station in the country reveals the mogul's deep disdain for half the population. If you listen to the recording, you'll hear a pretty unique combination of racist and misogynist haterade directed at V. Stiviano, Sterling's girlfriend. Yet the narrative of the racist Donald Sterling has completely overshadowed his blatant sexism.

In the recording, V. Stiviano is being instructed not to bring black people to games. When she asks why she can't associate with African-Americans while he can, Sterling retorts, "I'm not you and you're not me. You're supposed to be a delicate white or a delicate Latina girl." That is despite V. Stiviano's reply that she is, in fact, half black. When she rejects his instructions not to be "associating with black people," he threatens to leave her by saying, "If my girl can't do what I want ... I don't want the girl. I'll find a girl that will do what I want. Believe me." As Travis Waldron at Think Progress notes, he also repeatedly calls her "stupid" and shows no evidence of seeing for more than a "temporary trophy."

Clearly, Sterling values ethnicity, only in so far as he has ownership and control over it. He exemplifies bell hook's commodity culture, a system where blackness is something to be consumed, something that adds spice to the boring old white supremacist's pallet. Sterling's players make him money and "his girl" brings him a body he can conquer and possess. That's why Sterling can go to games with black men, but she is not afforded such freedom. That's why Sterling hates black men, but sexually enjoys a half-black woman. In the world of commodity culture, race is acceptable as long as it's instrumental to the Sterling's supremacy.

Not only has the inherent misogyny of Sterling been pretty much dismissed by the 24-hour news cycle, but V. Stiviano has been doubly victimized in this affair by commentators quick to question her motives. Instead of getting sympathy after the tape went public, she was labelled as a "gold-digger," a "girlfriend from hell" and a "whore" who tricked her boyfriend (into what? revealing his true colors?). "She was baiting him, and she's a terrible human being," Trump said on Fox News. Trump's vitriolic rant was both silly and unfounded, however, since it's been confirmed that Sterling requested his girlfriend record all their conversations. She didn't trick him into being a racist — he took care of that himself. The tape also demonstrates clear signs of emotional abuse, and yet V. Stiviano is still being blamed for his behavior.

Where's the sympathy? How can we both make Sterling the bad guy and extend no empathy to his victims? As Olivia A. Cole argues, "We should be proud of her. Why wouldn't we be? She exposed a racist for what he is, and simultaneously liberated herself from a relationship in which her womanhood and her blackness were being torn down and controlled."

Perhaps the reaction can be chalked up to the media focus on a lawsuit from Sterling's wife demanding that V. Stiviano return millions offered to her. But let's be clear here, Sterling ist he married man. He's a cheater who publicly brings his girlfriend to games.

Shouldn't that anger us more than the two Bentleys he gave to her "without the knowledge, consent or authorization of his wife"? Why are we mad at her for being a "gold-digger," and not at him for making his wife and mistress fight it out in court?

It's important to remember that the sports world has a well-known track record of giving zero figs about women, especially those of colour. In fact, it wasn't a long time ago that Don Imus called a woman's basketball team "nappy-headed hos" on MSNBC. Imus made this statement on-air with Sid Rosenberg, the sportscaster who once said, "One time, a friend, he says to me, 'Listen, one of these days you're gonna see Venus and Serena Williams in Playboy.' I said, 'You've got a better shot at National Geographic.' According to Media Matters, Rosenberg has "also referred to Venus Williams as an "animal." No wonder sport casters aren't rushing to V. Stiviano's rescue. No wonder NBA players can beat their wives and rape teenage girls without consequences. No one holds them accountable.

Ultimately, racism is sexed just as much as sexism is raced. And Sterling's recording show just how terrible that kind of behavior can be when left unchecked. In the present media landscape, women of color can only be gold-diggers, sexualized play things or angry black women. For the time being, unfortunately it seems like the media has managed to portray V. Stiviano as all three.