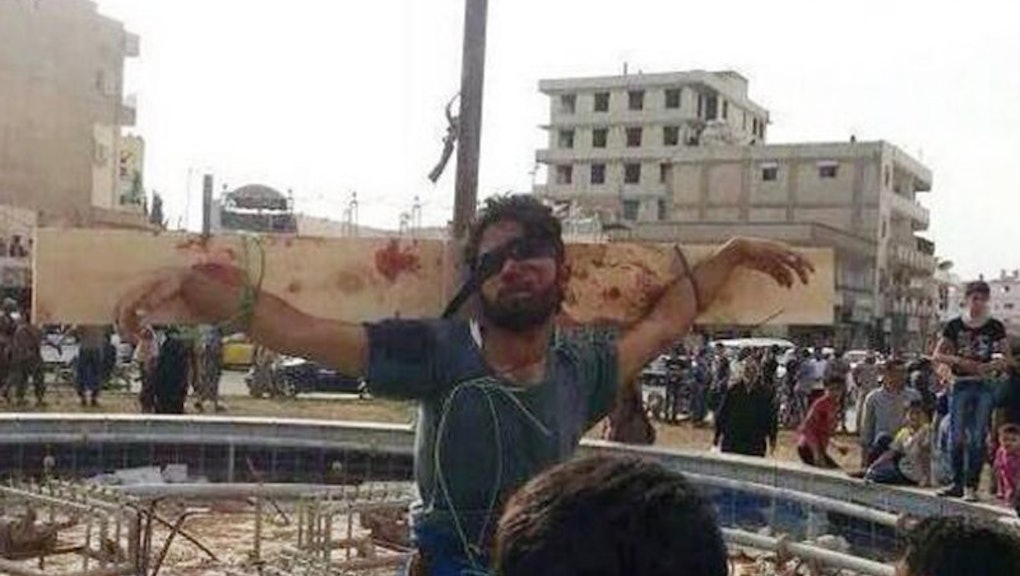 It seemed nearly impossible for the brutal civil war in Syria to get any more terrifying, but that's what just happened.

Islamic extremists in the country are now carrying out ghastly public crucifixions and broadcasting images of the torture across the Internet. "One of 7 people executed by ISIS in Raqqa today on charges of planting IEDs," reads one of the tweets recently posted to a jihadist account depicting some of these brutal executions.

The ISIS, the Islamic State in Iraq and the ash-Sham (ISIS), is an Islamic terrorist group so vicious that they were officially repudiated by Al-Qaida in early 2014. The group crucified two people and executed five others they accused of being members of a cell they claimed carried out a grenade attack on one of their fighters, which ultimately cost a child their life and a civilian a leg.

Abu Ibrahim Alrquaoui, who identified himself to FOX News as the founder of a group called Raqqa is Being Slaughtered Silently, said that the men killed had previously been involved in resistance against government forces serving President Bashar al-Assad.

"It's very dangerous. They threaten us directly and want to kill us," he said. ISIS wants "to stay in control. Everything they do is to scare people. That's why they kill people publicly."

On April 16, ISIS fighters allegedly crucified another man for stealing from a Muslim.

The images are below, compiled by Twitter user Aymenn J Al-Tamimi (WARNING: GRAPHIC):

Background: Raqqa is in north central Syria, but the country's rebels have been fighting over eastern Syrian oilfields in order to secure the hundreds of thousands to millions of dollars in daily funds needed to continue insurgent operations. Large tanks of crude oil are auctioned to smugglers who cart them to Turkey or to middlemen who sell them in the government-controlled western part of the country. In some places, the war against the government has become a secondary concern; hired rebel guards even escort tankers filled with crude oil to government checkpoints without firing a shot.

"The battles here aren't over God or [President] Bashar al-Assad. They're about oil," said an activist in eastern Deir Ezzor province. "Donors can turn the money pipeline on or off. But when you control an oil well, the pipeline never gets shutdown."

Thousands have died in northern and eastern Syria from rebel infighting in recent months, while ISIS and forces loyal to Al-Qaida affiliate Jabhat Al-Nusra struggling with each other and more secular rebel groups.

According to Al-Monitor, the jihadi fighter ranks are being swelled by hundreds of new recruits from Europe. ISIS has been accused by Amnesty International of committing human rights violations for crimes including torture, flogging, summary execution and detainment in secret prisons.