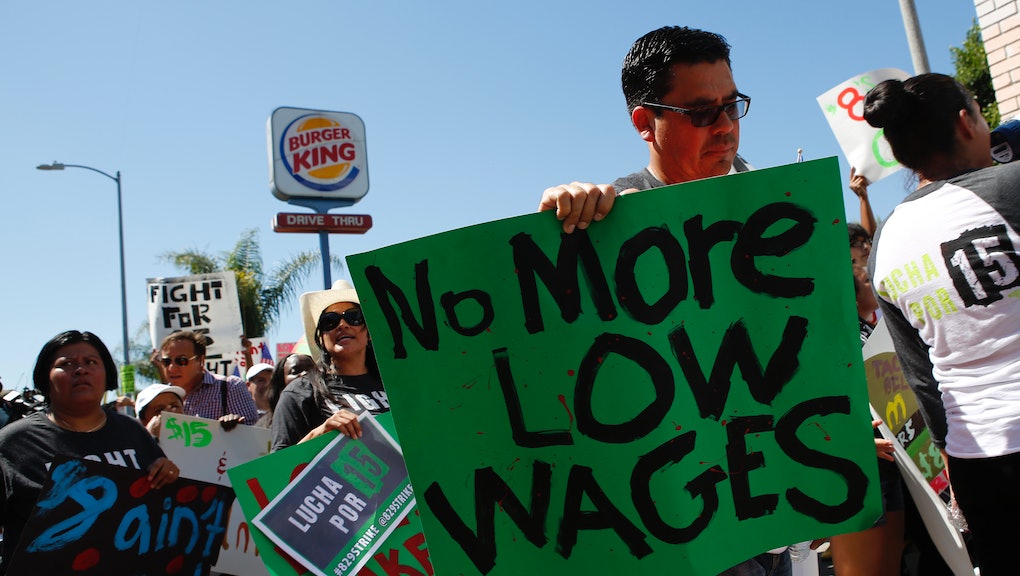 The news: The long-waited congressional vote on minimum wage will require some more waiting. The Senate failed Wednesday to even open debate on the contentious issue, as Republicans began a filibuster that lasted through the session, with only one member siding with the Democrats.

"If your member of Congress doesn't support raising the minimum wage, you have to let them know they are out of step, and if they keep putting politics ahead of working Americans, you will put them out of office," Obama said regarding the filibuster vote.

But it wasn't all bad news for minimum-wage advocates. The day before the filibuster, the Hawaii legislature decided to independently raise the state minimum wage from $7.25 to $10.10 per hour — the same figure put forward by congressional Democrats. The proposed wage hike will be implemented over the next four years.

"Raising the minimum wage I contend will have a direct, positive impact on Hawaii’s families," said State Sen. Rosalyn Baker. "Hawaii's women with children are disproportionately represented in low wage jobs, and they are the ones who will gain the most from an increase in the minimum wage."

As Congress gets bogged down by political infighting, state-level measures may be the best way to to implement higher wage. Five other states are considering adopting similar measures, though they may not have time to pass them before the legislative session ends.

What will happen next? Although the majority of Americans are in favor of higher minimum wages, the current federal bill is unlikely to make it to Obama's desk. Even if the proposal makes it through the Senate, it has very little chance of passing in the GOP-controlled House.

Still, minimum wage has become a rallying issue for the Democrats during a difficult midterm election, and they're unlikely to give up easily. And rather than make an economic argument for how increasing minimum wage would help the American economy, congressional Democrats seem like they would rather make an emotional appeal to the public.

"This is a moral issue. It's not who's going to vote for whom. It's about whether or not it is right that people who are working 40 hours a week get a fair shot at being able to provide for their families," said Senate Majority Leader Harry Reid (D-Nev.).