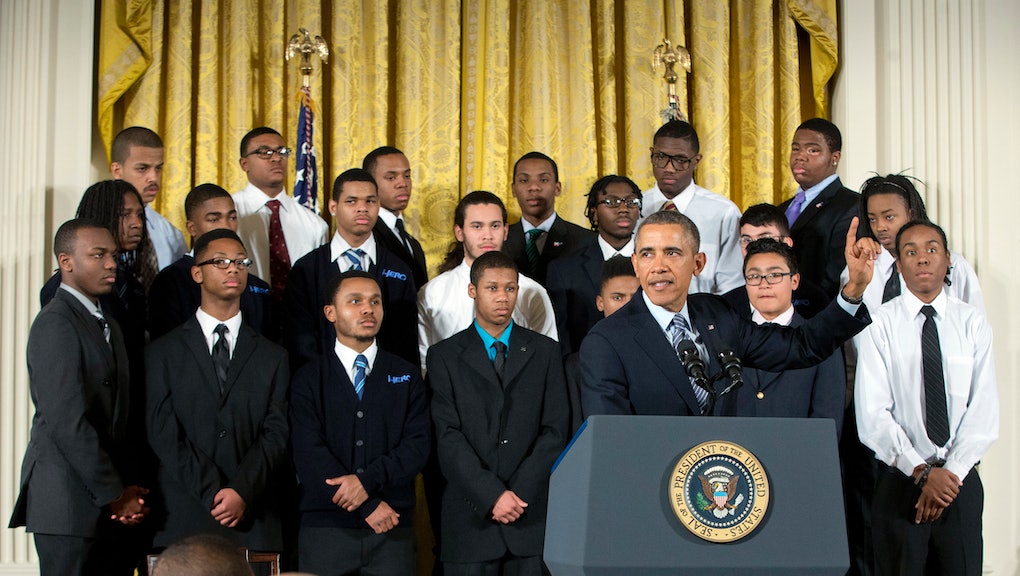 Earlier this month, 42-year-old middle school teacher Felicia Smith found herself in hot water after allegedly giving a birthday lap dance to a student in front of her entire classroom. Some have lauded Smith's lap dance as a coming-of-age tale for the student. But one has to wonder — if the young boy were female or white, would the response have been different?

For years, American notions of the African-American male have been misrepresented and misinterpreted, both in pop culture and in the media. Enter Question Bridge, an interactive project seeking to change the way we view black masculinity in this country.

The Felicia Smith case is just the latest example of how black masculinity has been constructed, with little say from black men, into harmful narratives that result in schools disciplining black boys more harshly, in black male shooting victims being blamed for their own deaths, and for the so-called school-to-prison pipeline targeting black teens disproportionately.

Increasingly, these types of narratives are perpetuated by the media. Congressman and former vice presidential candidate Paul Ryan's racially coded statements about black males are a good example, as is CNN host Don Lemon's memo outlining how young black young men could solve their issues by pulling up their pants, increasing their vocabulary, finishing school and keeping it in their pants.

In the 1990s, media outlets regularly referred to black men in groups as "wolf packs," describing their behavior as "wilding" and contributing to racial tensions that led to at least one wrongful conviction. More recently, the treatment of cases like Trayvon Martin's proves that even mundane behavior like walking from a store with a bag can be painted as suspicious by the mainstream.

Taken together, media perception, stories of violence and the criminalization of teenage behavior combine to create this perception of black males as criminally inclined thugs, sexual predators or no-good dropouts.

Organized by a group of artists, Question Bridge "is an innovative transmedia project that facilitates a dialogue between a critical mass of black men from diverse and contending backgrounds and creates a platform for them to represent and redefine black male identity in America," according to the project's statement.

Question Bridge is powerful because the project allows you to hear from black males about the issues that affect them the most, in their own words, in ways we often don't get to hear from black boys and men. It allows black men and boys to take back their own narrative, literally. Through video interviews, African-Americans of all ages and backgrounds answer questions like "How do you know when you become a man?," "Do you still value community upon release from prison?" and "Does being black means I have to be one thing that fits into a box?"

The answers to these questions also shine light on the fact that black men do not all share one monolithic experience. In fact, the lived experiences of most black men are a lot more complicated than the narratives depicted on Cops or on cable news.

In this endeavor, however, Question Bridge is not alone. A growing group of initiatives are all working to counter long-standing myths. Black Male Engagement (BMe) highlights those who have taken leadership roles in their communities. BMe offers $10,000 annual grants to black male community leaders, to help them fund projects that create positive change and tackle issues in their communities.

Shorters noted that these stereotypes can be so powerful that they overpower every other nrrative. "We literally ignore that black males are often our most entrepreneurial, patriotic and charitable people," Shorters said. "We also ignore that they aspire and achieve academically. Between the ages of 18 and 24, 82% of black males have their high school diploma, and 39.8% have college degrees or are in college right now. But if you don't share these stories, then it's very easy to believe in and live by half-truths and whole lies about our black countrymen."

Question Bridge, the White House's My Brother's Keeper initiative and BMe are all helping to give black men in America their voices back. Hopefully, the more honest narratives of black men are able to make their way into the mainstream, the rarer the consequences that result from negative perceptions of black masculinity will become.