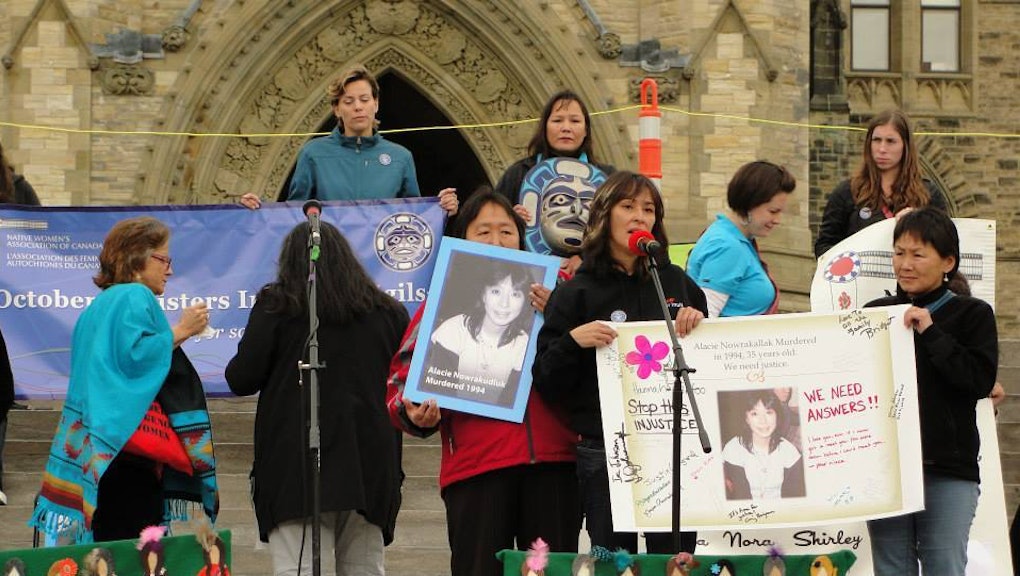 Canada's Government Confirms What Its Aboriginal Community Knew All Along

Sometimes the women are missing for a few weeks. Sometimes it's months, sometimes it's years, even decades. When women of First Nations disappear, many in their communities feel they are left to their own devices, partake in local search efforts and keep independent records of those who vanish.

There are some cases where these women are found alive. But much more often, they are found dead.

For the first time Canadian authorities have compiled a thorough database of these cases, showing that roughly 1,200 indigenous women have gone missing over the last 30 years. Royal Canadian Mounted Police (RCMP) files show that though First Nations women make up about 4% of Canada's population, they represent 16% of the nation's murder cases.

The overrepresentation of native women is significant, but perhaps the most haunting aspect is how often these missing persons cases end in the death of the victim. A vast majority of the reports in the database — some 1,000, or 83% — concluded in the murder of an indigenous woman. Of the remaining cases still on file with the RCMP, authorities suspect most are "victims of foul play."

The numbers show what native women have long been saying: Violence is enacted on First Nations women at far greater levels than other women.

It's not the first time someone has set out to catalog the disappearances: Independent organizations and researchers have expanded the oft-cited list from the Native Women's Association of Canada, but this is the first instance of tracking data across all levels of the Canadian police force.

The RCMP created the database of the deaths after mounting concerns from human rights organizations and Native communities. Though the database provides new information, it does little to address the calls for an audit of missing persons cases that arose in March following the high-profile murder of Loretta Saunders, an Inuk woman. After her death, activists called on the government to stop commissioning studies and to take comprehensive action to address the epidemic of missing and murdered indigenous women. Some even said police were complicit in the disappearances and willingly ignored missing persons reports.

Though the new report does show there is an overrepresentation in the number of abductions and murders of First Nations women, the RCMP maintains that solve rates for these crimes are level with the national average. Native communities, however, say that if police took quicker action, fewer of these cases would end in death.

As these disappearances go unaddressed, the conservative government of Canadian Prime Minister Stephen Harper has attempted to erode land and treaty rights of the sovereign nations. #IdleNoMore protests, spurred by Harper's controversial bill to dismantle indigenous treaties, were met with police violence in New Brunswick. The protests, which escalated in December 2012, called on the government to address the dire poverty on First Nation reserves, a reversal of which might help to lessen violence against Native women.

The research done by the RCMP is an important step in understanding the breadth of this tragedy, but it is descriptive, not prescriptive. We need to address the real question, which is why so many of these cases end in the loss of human life.