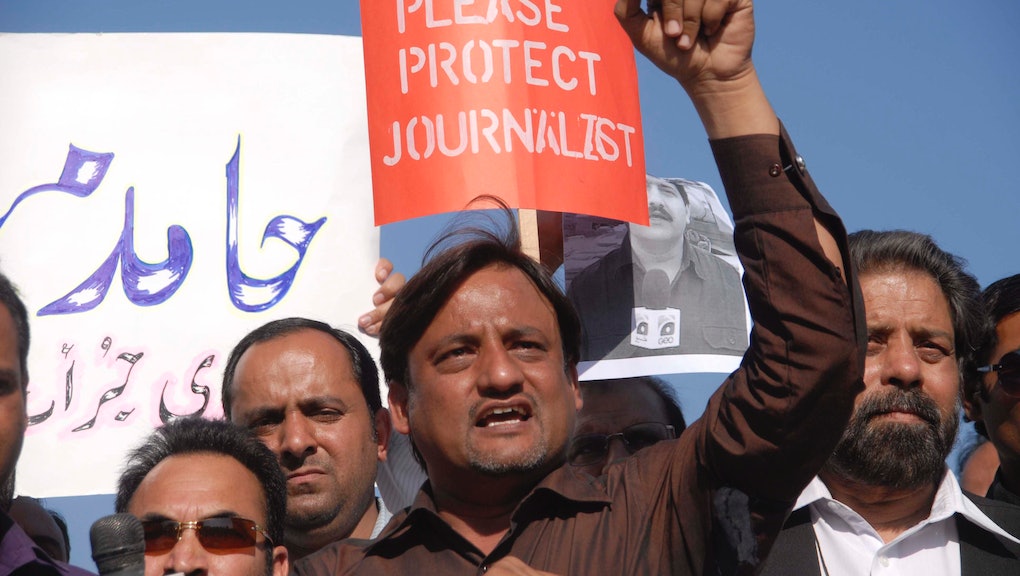 When we open our browsers, open the front page of a newspaper or thumb-scroll through Twitter, it seems that every day there's a new story about censorship, government crackdowns on independent and social media or the lives of journalists being endangered in the field.

Freedom House's newly-released "2014 Freedom of the Press" report found that of the 198 countries surveyed, two-thirds fell into the categories of "free" or "partly free."

In other words, only 1 in 7 people worldwide live in a country with a relatively "free" press.

Global press freedom has fallen to lowest levels in a decade, according to the report. The Middle East and North Africa saw the greatest regional declines, exacerbated by conflict in Iraq and Libya, the brutal war in Syria and journalists being thrown behind bars in Egypt. The report cites the targeting of journalists and foreign media, fear of new media and state ownership and censorship of the media as major and worrisome trends.

"We see declines in media freedom on a global level, driven by governments' efforts to control the message and punish the messenger," said Karin Karlekar, the report's project director.

This is especially true for some of the best-ranked countries, whose relative freedoms have been marred by recent scandals tied to documents leaked by former NSA contractor Edward Snowden.

Snowden made headlines in 2013 when he funneled thousands of documents to the Guardian and Washington Post on the breadth of NSA surveillance. Both the U.K. and the U.S. saw a drop in their scores because of their governments' response.

Authorities in Britain clamped down on the Guardian, threatening legal action, detaining journalist David Miranda at London Heathrow Airport and overseeing the destruction of computers with files and stories related to the Snowden leaks.

As one of the countries to be called out in Freedom House's press release, it's not the U.S.' ranking that comes a surprise, but its decline in freedoms over the last four years.

The full report cites an increase in the number of Freedom of Information Act requests that were denied or censored, as well as legal harassment of journalists covering national security. Snowden's leaks also revealed evidence of the U.S. government wiretapping journalists, raising questions about journalists' ability to protect their sources and report freely.

Journalists in the U.S. are not being kidnapped, shot or imprisoned, but the country's tactics for singling out journalists abroad based on anti-terror laws are being exported around the globe, to chilling effect. These examples of how the mighty can fall are emblematic of Freedom House's overall findings. We should ask ourselves how this happened, and why.