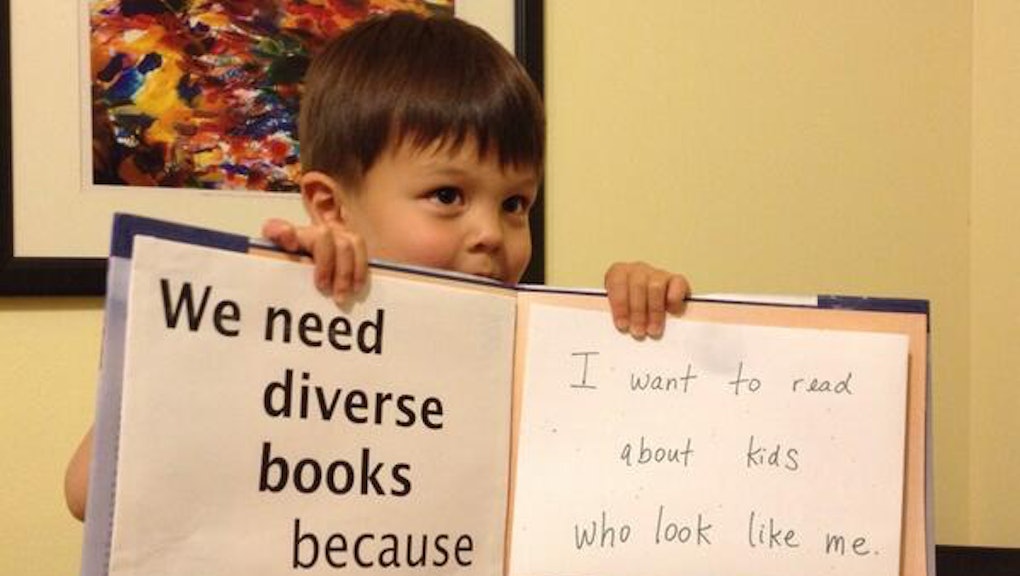 Out of the 3,200 children's books published in 2013, only 93 were about black people. Look to other ethnic groups and the numbers are even lower: 34 were about American Indians, 69 were about Asians and 57 were about Latinos. Enter the #WeNeedDiverseBooks campaign.

Launched on May 1, the campaign's plan is a two-day hashtag and photo barrage in order to wake up the publishing world, or as they put it, to turn their voices into a "roar that can't be ignored." They're campaigning, yes, for diversity in children's books but also acknowledgement of the diverse authors who are already writing those books. Book fairs and panels often highlight exclusively white writers which feeds into the larger problem. In fact, the event that inadvertently caused this uproar was the readers' convention BookCon which featured an all-star line up of 30 children's writers. All 30 of them were white.

Young readers look to books and media to understand their world and themselves. If the world they're reading about is homogeneous, the effects will be isolative. African-American children's book writer Walter Dean Myers wrote on his own experience as a young reader for a New York Times op-ed describing his reaction upon realizing that books did not include his story: "Books did not become my enemies. They were more like friends with whom I no longer felt comfortable. I stopped reading."

The #WeNeedDiverseBooksCampaign is getting supportive media attention and a lot of traction on social media with hundreds of new tweets being added per hour. Hopefully it will also achieve what we need most of all, diversity in books.

Have a look at some of the moving reasons why readers think we need diverse books and join the conversation.