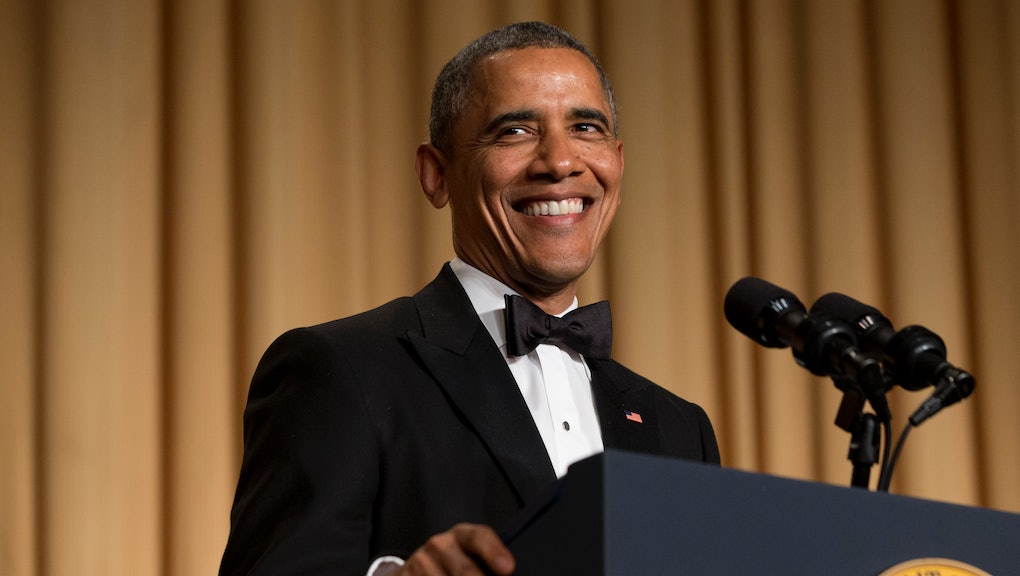 On Saturday night, Hollywood and Washington came together for the much-anticipated (and probably equally dreaded) annual White House Correspondents' Dinner. Though Joel McHale, known for E!'s The Soup and NBC's Community, was on hand to offer a slew of jokes, it was the comedian-in-chief Barack Obama who cracked some of the best LOLs of the night. For several years, we've known that Obama isn't afraid to make fun of himself and his political buddies, and this year's edition did not disappoint.

A few of the night's best jokes from Obama included:

On how the shaky Obamacare web signup was just like Frozen: "On the plus side, they did turn the launch of HealthCare.gov into one of the year's biggest movies."

On CNN's incessant coverage of the missing Malaysia Airlines flight: "I am happy to be here even though I am a little jet-lagged from my trip to Malaysia. The lengths we have to go to get CNN coverage these days ... I think they're still searching for their table."

On FOX News in 2016: "Let's face it, FOX, you'll miss me when I'm gone. It will be harder to convince the American people that Hillary [Clinton] was born in Kenya."

On MSNBC: "MSNBC is here — they're a little overwhelmed. They've never seen an audience this big before."

On his daughters and Democrats distancing themselves: "I did notice, Sasha needed a speaker at Career Day. She invited Bill Clinton. I was a little hurt by that."

On gridlock in Congress: "You've got to wonder, what did we do to piss off Chris Christie so bad?"

And again: "If you want to get paid while not working, you should have to run for Congress just like everyone else."

On his last year: "At one point, things got so bad, the 47% called Mitt Romney to apologize."

On rancher Cliven Bundy: "A general rule — a sentence doesn't usually go well when it begins, 'Let me tell you something I know about the Negro.' You don't really need to hear the rest of it."

And possibly the best line of the night:

On the opposing side: "These days, House Republicans give John Boehner a harder time than they give me. Which means orange really is the new black."

You can watch the entire speech for yourself below.

Obama's speech worked because of its comfortable and natural balance between solid jokes and hitting on real issues. Though Obama isn't worried about his own re-election, the 2014 midterms are coming up fast, so he couldn't go too far off the reservation in attacking Republicans. But with a solid mix of quips on FOX News, CNN, Boehner's skin color and his own shortcomings, it's safe to say that Obama did exactly what he needed to do: be funny, but not too funny and make fun of other people, as long as you make fun of yourself too.

There was also this fairly hilarious short of Julia Louis-Dreyfus and Joe Biden skipping out on/introducing the correspondents' dinner. It's definitely worth a watch as well.